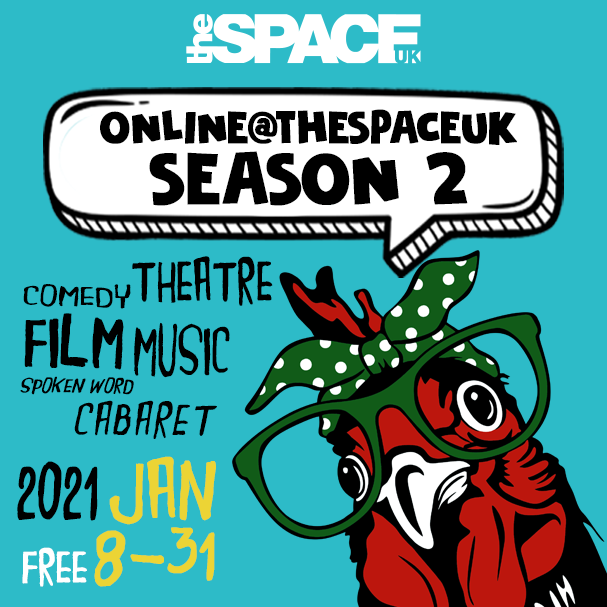 Are digital-only theatre showcases the shape of things to come?

A guaranteed alt.Fringe Show front-seat performance in the intimacy of your own, ‘They’re coming to bring-me a take-away,‘ pizza-crust-crumbed, dog-salivaed, front-room sofa?

The dark prospect of not ever going out again to a live, audience ambient gig? theSpaceUK launched to the press on Saturday and is now available online until 31 January – and it begs to differ. It is not the survival of the fittest, a spurious eugenics lie, but the survival of the most adaptable.

It was the mammalian shrews who screwed the dinosaurs when the cataclysmic comet came crashing by. Think post-Covid – be shrewd!

Established in 1995, theSpaceUK specialise in producing live performance. Their theatres are widely recognised as the home of award-winning theatre and new work at the Edinburgh Festival Fringe. Hosting the largest and most diverse programme at the Festival, they offer an array of new writing, theatre, dance, music, children’s and family shows, comedy, drama, sketch, cabaret, opera, a capella, exhibitions, events and stand-up comedy shows.

This was full-on belts ‘n braces preparation for Fringe 2021 and be damned otherwise.

Representing theSpaceUK, Nick Abrams fielded an array of questions to artist, movers & shakers and guests on Zoom. Given the audio/visual limitations of said medium it would be unfair to lend any critical comment on the three or so minute showcase/taster acts.

Consider though, the prospect of Twenties, featuring a surreal interview involving compulsory dinosaur costumes to be worn by successful candidates. Or, perhaps an encounter with New York based, ‘Half-Baked Alaskan’ Canadian musician/comedian, Sally Anne Hall. Her dead-pan, battery-acid for eye-drops, finger-nail pulling observations include, ‘If you can make it in Alaska – ask yourself why?’

Broadway Baby’s Richard Beck, had some salient advice for prospective acts planning to take on the discerning punters this summer. Stating the obvious, he began with, ‘The Fringe is what ever you want it be, especially as it is the easiest and quickest way to lose all your money! Make sure your show is as bloody good as it can be!’

It was important to get impartial input and reach outside your mutual back-slapping, self-congratulatory bubble. Get networking. Get yourselves out there – Now! Other advice focused on keeping your ‘fliers’ functional, informative and have a story to tell and please…No Brexit shows! Also, research active reviewers from past Fringes and make contact with those you think will be sympathetic to your muse. Start now and keep in touch. Invite them to your show – but (Edinburgh Reporter disclaimer) don’t sleep with them beforehand). Your Press Release is vital to your profile. Remember that story about your Company. Keep publicity neat and simple. For previews/reviews give the writer easy access to cut & paste copy and please, oh please, clear, precise easy to read email/website contact details.

Elaine Chapman, highly respected reviewer and avid supporter of independent Arts projects, emphasised the need to target shows at The Offies, (Launched in 2010 to recognise and celebrate the excellence, innovation and ingenuity of independent Off West End theatres across London).