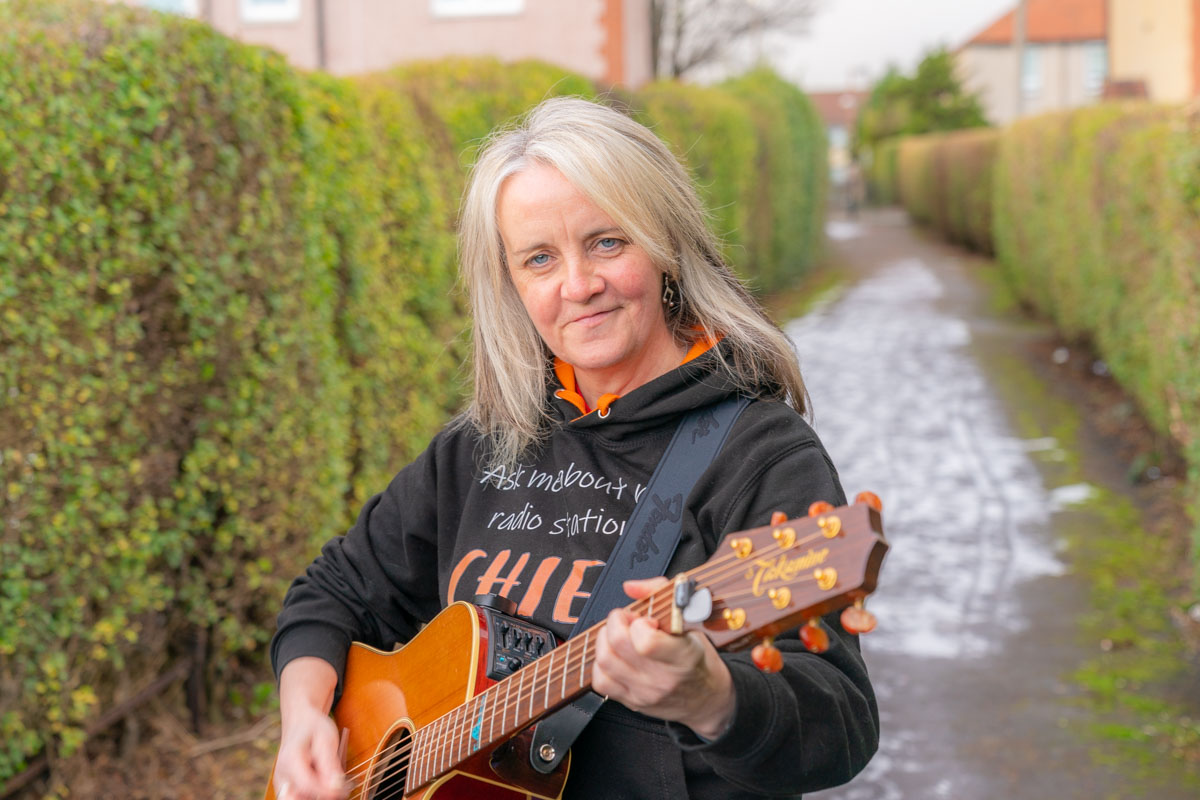 Kirsty Baird has been awarded the British Empire Medal (BEM) in the New Year Honours List for services to singing, to mental health and to the community in Edinburgh during the Covid-19 response.

Kirsty (53) is a whirlwind of energy, and has so many strings to her bow that it quite takes your breath away. She started the Sing in the City choir around ten years ago and it has now expanded to incorporate 18 choirs with around 1,000 members. The members are also a bit of a force to be reckoned with, having been brought together by the singer songwriter with a focus on community, inclusivity, friendship and charity.

They took over our Twitter feed earlier in the year, helping Kirsty to propel the charity single, Follow the Rainbows, which she wrote, recorded and released along with partner Annette as the group, Hanley and the Baird, to number three in the Scottish chart. The single also reached number 27 in the UK download charts. This marked the tenth anniversary of Sing in the City, as well as saying thank you to all the key workers during the pandemic. The single (with no radio airplay) went right in at number three of the Scottish charts and number twenty-seven in the UK downloads. In less than a week over £5,000 was raised on a fundraising online page alone, excluding the downloads for the song.

The song tells the story of their choir family coming together, overcoming their fears and insecurities and replacing these feelings with strength and positivity. The song contains words and phrases that the choir members said during an online chat in week two of the quarantine as they discussed how they were feeling.

The mental health charity the Scottish Association for Mental Health (SAMH) was selected as the beneficiary, and the song raised £5,400 for their work. In the last ten years, Kirsty has raised £127,000 for charity.

The members of her choir are fiercely loyal to her and to the notion of keeping the music alive. They have continued to meet through Zoom during the pandemic to keep their community thriving, and to look out for each other too. Some of their members have of course been shielding during the pandemic, and everyone has missed the camaraderie of the choir sessions. The choir virtual get togethers have been a lifeline for many of them. Singing together was no longer an option but along with Annette Hanley who is also a musical director of Sing in the City Choir, Kirsty has organised a new range of activities to keep their members interacting with each other and learning new skills. One of the things that Kirsty has done is teach guitar, although it was a challenge trying to teach someone when the guitar appeared to be the wrong way round on Zoom!

In the BEM citation it is said of Kirsty that ‘Her vision has inspired, reassured and engaged choir members and their friends and families.”

Annette and Kirsty also perform an online acoustic session every Friday since the lockdown began, keeping everyone connected.

As if that was not enough, Kirsty then set up her own radio station Chief Radio. This is a platform for unsigned artists, as Kirsty realised how hard it was to get the single noticed.  It is also where they raise funds to buy Alexa devices which they then donate to care homes. On Sundays, Kirsty presents her own show called Rock the Care Home with some classic tunes. Kirsty realised the people who would enjoy this show most were likely the people in care homes who probably couldn’t easily listen. She created a donation drive to make it easy to listen, enjoy and reminisce.  All of the music on Chief Radio brings some routine and joy to those listening, particularly during lockdown.

The singer has abseiled off the Forth Rail Bridge amongst other charity initiatives with choir members. Funds raised from the events are used to provide, free tickets at shows, free pop up choirs, and is donated to local charities.

Kirsty told The Edinburgh Reporter: “It’s really lovely, and I’m very, very proud. It did take me a bit to get my head around it because I didn’t feel like I had done anything particularly that I had deserved it because all I was trying to do was just carry on doing my job, the best that I could. But once I got my head around it is very cool and it’s very nice. I guess I’m a bit speechless about it really. It’s only just hitting home now I guess because of all the press and people are kind of asking me for quotes and things like that. But yeah, at first I have to say I thought somebody was winding me up.

“Especially with my character I spend most of my life actually winding everybody else up or you know. I just thought it was just somebody trying to get their own back on me.

“Whoever nominated me wrote a very concise email about me. I’ve seen the email and I’ve heard what they said about me. When you hear someone else speaking about you, in that way – which is nothing to do with me whatsoever – So it’s got nothing to do with press releases or my opinion, it’s actually really sweet to hear that somebody else’s opinion of you, is so strong, and it warrants them to feel strongly enough to go and do whatever you need to do to get somebody nominated for this. That is what I think is the most special part of it.”

The honour of BEM which is a civil award for meritorious service, was reinstated by Prime Minister David Cameron after a gap of 20 years. Its reinstatement coincided with the Queen’s Diamond Jubilee.