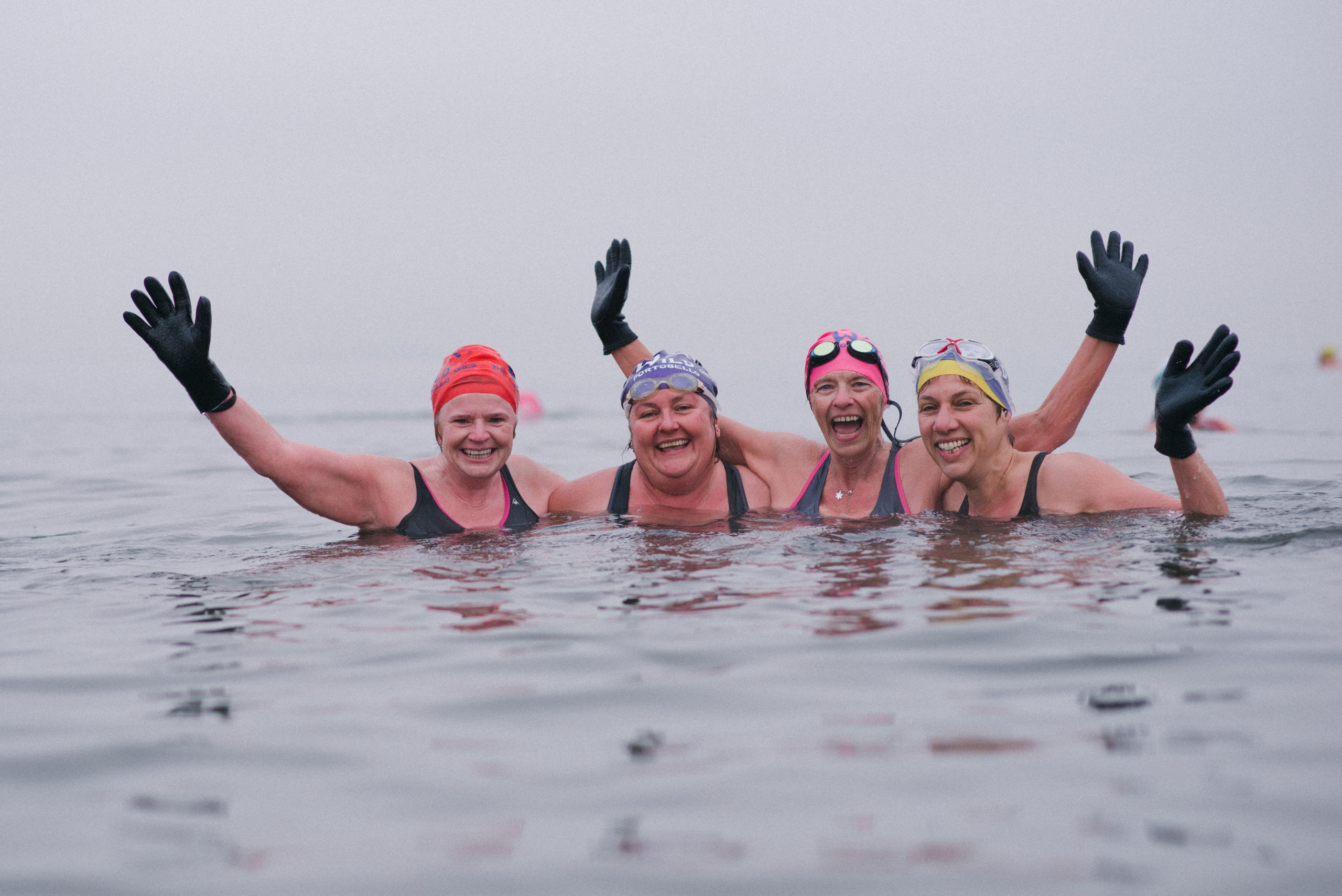 As we properly enter the winter months there is a huge temptation to hunker down and close the door to a confusing landscape of Covid-19 restrictions which appear to change by the week if not the day.

With limited entertainment and hospitality choices, pulling down the blinds and settling with a good book or serial binging on the latest critically acclaimed Netflix blockbuster will be a tempting option for many.

However, academic studies and health experts tell us that during these stressful times we need to nourish our minds and bodies with a blend of activities which can ward off anxiety and help us to better survive the shorter days and changed environment which the coronavirus pandemic has foisted upon us.

One activity which is in vogue and which has gathered thousands of new advocates over recent months is wild swimming – or as older wags put it – swimming in the sea.

Edinburgh is blessed with a shallow beach which is accessible and hasn’t got any particular currents, and where each day scores of people pull on their dookers – or wetsuits for the not so brave – and dive in to the Firth of Forth.

The Wild Ones Facebook page, started some years ago by a group of wild swimming enthusiasts in Portobello, has seen its membership grow from a few dozen to more than 4,000 and up and down the coast similar groups are discovering the health benefits of swimming in the sea.

While the Wild Ones are delighted to welcome new enthusiasts, they are at pains to point out that Scottish Government guidelines on mixed households needs to be adhered to and there is some cautionary advice for newbies.

Oonagh O’Brien, who has been swimming in the ocean and wild waters since she was a young girl, said: “For a long time our Facebook page was just a handful of like-minded people but three or four years ago it just seemed to go crazy and it has grown beyond all expectations.”

One reason for the increased popularity could be down to accessibility to better equipment, according to Oonagh. Now, swimmers can more easily afford wetsuits to ward off the North Sea chill, and a major factor has been the introduction of weatherproof and windproof changing robes, which are not an uncommon sight on Portobello beach.

“Certainly, the kit has improved, it is a lot more affordable, and the dry robes have been transformative because as soon as you get out the water you pull it on and it cuts out the wind and the cold,” said Oonagh.

“We are also in the middle of a capital city and we have this wonderful, shallow beach, which is a good place to try out wild swimming for the first time. In normal times we like to hold people’s hands a bit and introduce them to swimming in small groups, but sadly we can’t do that in the current climate. However, it’s really important for anyone starting out that they are aware of the safety issues and that they don’t literally plunge in.”

Families of all ages, groups of teenagers and students, visitors and local residents alike have taken like ducks to the Edinburgh coastal waters and in particular “older” women appear to find open water swimming stimulating and very sociable.

But Oonagh and the Wild Ones are keen to point out that getting into cold water, especially in the winter months, can be dangerous. She said: “The warmest months for swimming in Scotland are late August and September while the coldest is February. It is better to start in the Spring and for anyone venturing into the water at this time of year they have to remember hypothermia take hold very quickly.

“While Covid-19 has probably encouraged people to try new things such as wild swimming, we are a bit nervous about people swimming in the cold and not preparing properly for that. They have to be careful and if they are in the water and they start to think ‘this feels great’, that is the time they should be getting out.

“The main danger is when getting out of the water. You may feel fine but after a few minutes you can experience a really deep, cold chill. Our advice is not to stand around in wet clothes but get dressed really quickly, and avoid the temptation of taking a hot shower right away, but wait until your body has readjusted as the hot water on a cold body can cause fainting turns.”

For those keen to keep active but to have their two feet firmly planted on terra firm, Fit & Happy run women-only classes up to a maximum of 12 people in local parks in Edinburgh.

The outdoor exercise classes may have a boot camp feel to them but Julia McCabe, who founded the company, explained: “There is no shouting, it is not military style, but exercise in small groups, and it is about getting together in the fresh air and exercising.

“It is quite social and a lot of the women come for the social aspect, the feel good factor and having a laugh. It is not too serious and it is for all ages and fitness levels. We do not compete on an individual basis, it is very relaxed. Everyone works hard,  but they do that at their own level.”

There are classes in The Meadows, Victoria Park, Spylaw Park, Ravelston Park and Inverleith Park. There are also LIFE classes (Low Impact Fun Exercise) classes in Colinton and Holyrood aimed at those who don’t really want to jump and run. These classes are for people who like being outdoors but just don’t like exercising in a gym for whatever reason.

Personal trainer Julia began working with women outdoors on a 1-1 basis. She says there are many additional benefits of being outdoors, mainly for mental health and wellbeing. She added: “For me it is all about being in nature. But in running 1-1 classes I could only reach so many women, so about three years ago I started group sessions in The Meadows. The demand was there, so now we have more coaches and classes available.”

Wild swimming and exercise classes aside, for those who may not be able to venture far there is no end of possibilities in being more active in your own home, the garden or even your street.

Bryan Temple is a Personal Trainer at one of Edinburgh’s leading gyms and has been training and coaching at all levels, from beginners to elite athletes, for close to 30 years.

He said: “There is now so much information out there, much of it now science based, in literature, podcasts and online, that it is lot easier for people to understand what they have to do to reach a specific goal.

“My job as a Personal Trainer is to help them along that pathway, whether it be elite athletes aiming to be the best they can possibly be, or at the very basic level someone who just is looking to move about a little more than they were doing before, and finding what kind of movement they are capable of.

“There is a whole range of things people can do, and they don’t even have to leave the house. It can be as simple as taking a kitchen chair and sitting and standing for a count of 10. This is basically a squat and it will improve their quadriceps, lower body, possibly the lower back, and depending on the individual it might create a heart rate response.

“They could then combine this with some upper body exercises such as a press-up. But a press-up does not have to be Army style, it can be using the back of the settee as a prop or against a wall in a semi standing position, and based on the individual’s capabilities.”

For those who can get outside, they can use the built environment around them, suggests Bryan, such as the street where they live or a nearby park. He added: “If your street has trees along it for example, or in the park, start walking briskly for two trees then slow down for the next two trees and repeat. For those who are fitter they could do the same but jogging or if at a higher level by sprinting.

“My best advice is if at all possible get out of the house, the benefits of being in the open air, both mentally and physically are considerable. They will feel real benefits from visual stimulation, especially if they have experienced a longer lockdown situation and simple things like people watching, fresh air and whatever sun there is at this time of the year, can be refreshing and much more stimulating than sitting in front of the tv.”

Age is no barrier to taking some form of exercise and improving your well-being believes Bryan. “We all slow down as we get older but you just have to do what works for you. The challenge is to move more than you did the day before. If that means starting by walking to the shops fine, and when that becomes comfortable push yourself by walking to the shops and then add on an extra block. By pushing yourself a bit further each day you will soon feel the benefits and it will leave you feeling much better in mind and body.”

You can find out more about The Wild Ones and swimming safely at Portobello at www.facebook.com/groups/wildonesedinburgh/ and Julia’s exercise classes at www.fitandhappy.co.uk

All wild swimming pictures are by photographer Anna Deacon and feature in her book Taking the Plunge, co-authored with Vicky Allan.