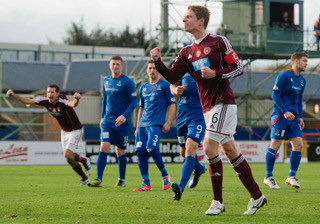 The sad news broke during the Scottish cup semi-final between Hearts and Hibs on Saturday 31 October 2020, a victory for the Gorgie side duly dedicated to Zaulikas’ memory by Jam Tarts manager, and former team mate of the big Lithuanian, Robbie Neilson. Hearts came together as a club during Saturday’s win over Inverness, the first since the news broke, to commemorate Marius’ contribution to the club with a minute’s silence.

Big Hearts Community Trust, the charity related to the Club, opened a silent auction for a shirt worn by Marius Žaliūkas on the day of his 29th birthday (10 November 2012) in a 1-1 draw away at Inverness. The charity explains: “As we mourn the loss of Marius Žaliūkas, Big Hearts today launches a unique auction with every penny raised going to MND Scotland. We hope fans will take the opportunity to bid for this unique piece of memorabilia whilst supporting the fight against motor neurone disease.”

Bids over £1,000 are welcome until 4.45pm on Tuesday 10 November – notably eight years on from the game in which Marius’ 90th minute penalty rescued a point for his team and, sadly, on what should have been his 37th birthday. For those interested in bidding please email communications@bighearts.org.uk. More info at can be found on the Big Hearts website here.

Additionally, football supporters have generously contributed to a JustGiving Fundraiser set up by Hearts’ fan Gary Cowan, with over £5,690 raised so far. The fundraiser says: “Marius played 222 games for Hearts scoring 15 goals. He became a much-loved club legend, captaining the club to its historic 5-1 success in the Scottish Cup Final of 2012. He will always be remembered as one of the overseas players who really understood Hearts and the values which underpin the club. Motor Neurone Disease is a horrible condition and it is vital that research continues into finding a cure for this disease. Please support this appeal in Marius’ memory.”

Within two weeks of Marius’ death, the total raised by the extended Hearts’ family in aid of MND Scotland is expected to reach £8,000.

MND Scotland is the leading charity in Scotland providing care and support to people affected by Motor Neurone Disease (MND), as well as funding vital research into finding a cure. On their social media, the organisation recognised these outstanding fundraising efforts: “Thank you to everyone who has helped raise money in memory of Marius. Every penny raised will help us fund research to fight back against MND.”