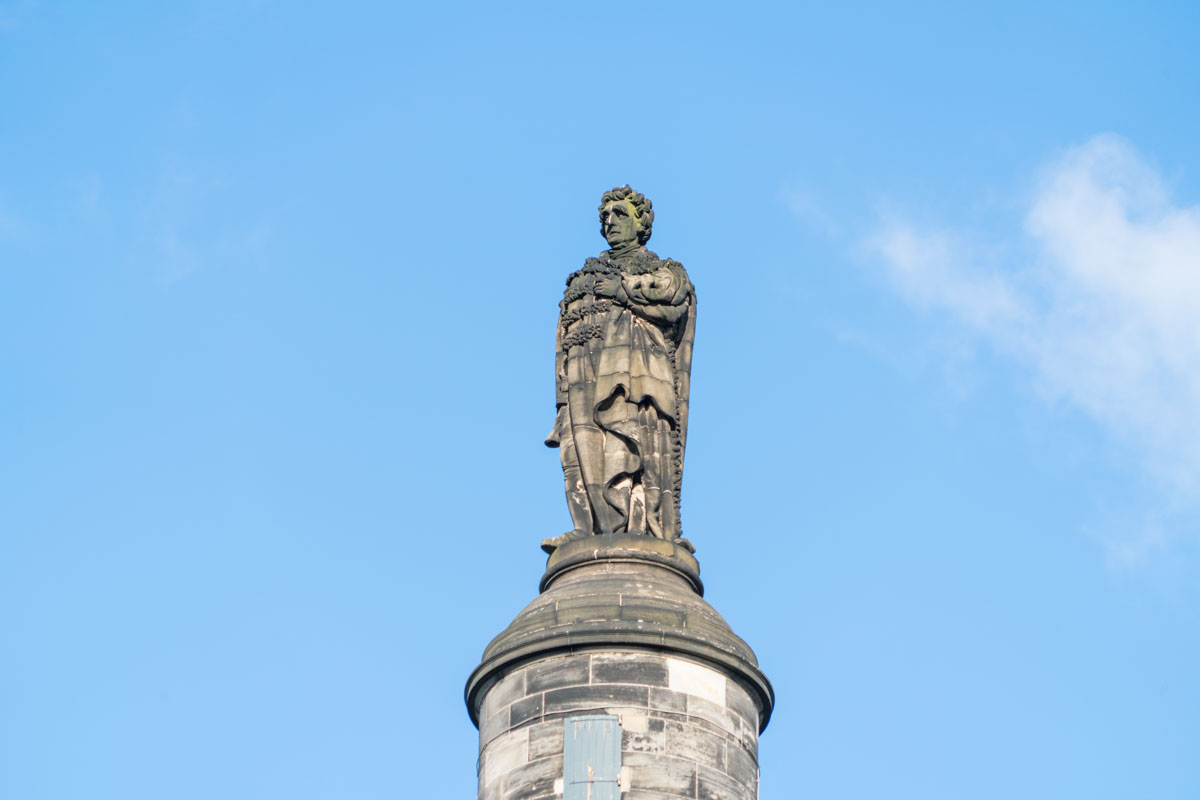 The Melville Monument in Edinburgh became a focal point for Black Lives Matter protests earlier in the summer.

The documentary, ‘Scotland, Slavery and Statues’ – broadcast on BBC Scotland earlier this week and to be repeated on Saturday, 24 October 2020 – follows the debate over how controversial politician, Henry Dundas, should be remembered.

It features interviews with Professor Sir Geoff Palmer, the human rights activist, relatives and descendants of Henry Dundas who sits on top of the 150 feet high monument, activist Luke Samuels and the Council Leader, Adam McVey.

I am Scottish as well as Persian (Iranian). I have experienced the differing impacts of racism within my family in Scotland and the US. I have also lived in countries colonised by the British and witnessed the massively detrimental impact and ingrained racism that exists due to a serious lack of mainstream education on colonisation.

So I knew when I moved back to Scotland six years ago that I needed to start learning about and making documentaries about colonisation, and particularly about Scotland’s heavy involvement in the transatlantic slave trade and slavery. If the mainstream population understand this history hopefully we can reach a point where there is a sense of connection and belonging for all, particularly Scottish black people in Scotland.
Four years ago I was aware that many of the stories related to slavery were emerging from Glasgow. I wanted Edinburgh’s involvement to be told. I realised that a challenge to the wording on the plaque of the Melville Monument was a story that needed to be followed.

Would slavery and the slave trade ever be mentioned on the plaque? If not, then why not? If so, then what impact would it have for Scotland? I was the only documentary maker that felt it was important enough to follow. It took persistence, patience and a lot of my free time to follow the story to then reach the point of getting it commissioned and told to the Scottish public.

Who commissioned the documentary?

David Harron at BBC Scotland. I had been following the story for four years and had touched base with him approximately each year asking if he was interested and finally he said yes!!

Explain the thinking behind the production’s look and feel.

I produced and directed the documentary and filmed certain scenes, but, on the whole, brought in experienced camera people to film the bulk of it.

I decided to use the eye-direct camera technique to capture more intimate personal scenes of the key characters conveying their opinions on the subject at the start of the story. I also brought all four together to debate and chose an intimate grand and historic library room in The Scottish National Portrait Gallery that conveyed the mood and feel of a subject that harks back in time to the 1790s.

The ongoing stages in the story were filmed on location, handheld, putting into context the locations where meetings were held in the city, and where they were in relation to the Melville Monument.

We had to film during the Covid-19 pandemic so all the more recent interviews had to be filmed outside, but we managed to do so in places that were relevant to each contributor, such as Councillor Cleo Lake in Bristol just where the Colston statue was dumped in the water, or Luke Samuels speaking at a BLM event demanding the statue come down.

So with the relevant styles for different peoples and scenes weaved together it has become an upbeat vibrant but personal documentary on a sensitive topic.

Who are the key personnel?

I decided to co-produce with Firecrest Films as I had only 11 weeks from commission to complete the documentary in time for Black History Month.

I chose Mark Harrison from Firecrest to be my executive producer. He has a depth of experience on television documentaries that range from sensitive topics to investigative stories with tight time deadlines. He also has an established working relationship with my commissioner and executive producer, David Harron, from BBC Scotland.

Winifred Kakouris, my assistant producer, was excellent, efficient and has studied British colonialism, which was ideal for this documentary.

Charley Lines-Sutton was my production manager from Firecrest Films who was good at ensuring all Covid protocols were followed, along with general PM activities.

Freelancers, Ceri Isfryn, was my edit producer and Anthea Harvey was my editor. They were both excellent at making this happen in such tight timescales.

It was narrated by actress and producer, Moyo Akandé.

What kit and software?

What were the main production challenges?

Pre-Covid, tying to get access to meetings or occasions where discussions were taking place, which was hard as many were in Council buildings and were private. This meant filming the contributors before and after meetings outside premises, setting up interviews to ascertain their more in-depth points of view, creating the debate scene to convey what the discussions would have been like.

During Covid, we had to reduce the crew to myself and my DOP and I had to ensure all Covid protocols were adhered to. We had to film outside, and on one occasion when it was pouring with rain we had to be efficient enough to work out an alternative to ensure the interview went ahead.

All post-production was via Zoom or telephone, which made things harder. I often wished I could sit with my editor in a studio. It would have been so much more easier and enjoyable.

What did you most learn and enjoy from the experience?

I am really happy to finally get this film made and seen by many after filming it on and off for four years. I knew it was a story to be told and I persisted and that persistence has paid off.

The content I shot with my more basic camera was used in the film and it makes you realise that sometimes it doesn’t matter what camera you use if you capture a moment that is gold. It has been a massive learning curve for me as this is the first one-hour documentary I have produced and directed and it was good to work with Mark Harrison and the team at Firecrest Films to make it happen.

Footnote: The Edinburgh Reporter also provided Urquhart Media with some of our footage from earlier in the summer at the BLM protests in Holyrood Park and St Andrew Square, and so we are mentioned in the credits. 🙂