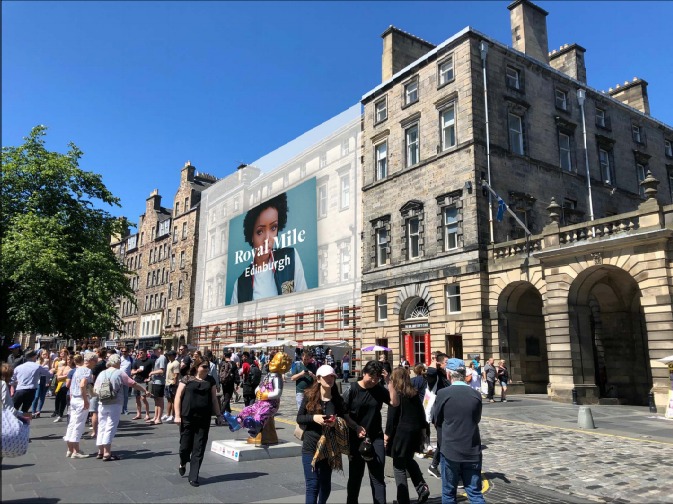 Community councillors are ‘vehemently objecting’ to plans to hoist a huge two-storey advertising board on the Royal Mile, which they say will ‘blight the memory’ of all who visit the Old Town.

London-based firm blowUP Media, which is owned by German advertising giant Ströer, wants to construct a 15 metre by eight metre advertising billboard on the side of 329 High Street, opposite St Giles’ Cathedral.

The advertising hoarding will be fixed to the scaffolding that has been erected on the outside of the building to facilitate renovation works, and will be illuminated by six external flood lights.

The application, submitted to The City of Edinburgh Council planning committee by blowUp media, asks for permission to leave the advertisement up for a whole year.

However, Edinburgh Old Town Community Council has lodged an objection to the plans, saying there is ‘no excuse’ for permitting the development: “The Old Town Council vehemently object to the proposed advertisement.

“This sort of advertising has absolutely NO PLACE in the World Heritage Site, or the Conservation Area, let alone here on such a prominent location on the Royal Mile.

“The elevation drawings disingenuously show the hoarding innocuously with the word ‘Royal Mile’ when in fact according to the documentation, it will carry commercial product advertising.

“There is absolutely no excuse for permitting this. It has no redeeming features. An extra income stream for the developer is absolutely not an acceptable reason at all.

“That it is temporary is meaningless, apart from being there more than the three months usually considered temporary, it will be permanent in the memory of the thousands of visitors whose memory of the Old Town will be blighted forever.”

The application has so far attracted 35 letters of objection, and one letter of support from the Chris Stewart Group, which is undertaking the redevelopment of the building. Chris Stewart acquired the building from the council who previously used it as offices.

A letter, from the Chris Stewart Group’s acquisitions and developments manager, Hugh Fraser, reads: “Following the success of the banner wrap put in place on CSG’s Love Loan development site, that sits directly opposite Glasgow City Chambers on the corner of George Square in Glasgow, we support the application for a banner to be put in place on our scaffolding at 329 High Street.

“The banner will greatly improve the appearance of the scaffolding when in situ but also helps to drive awareness of the development, ultimately helping to improve the chances of success of the important regeneration project on the Royal Mile.”