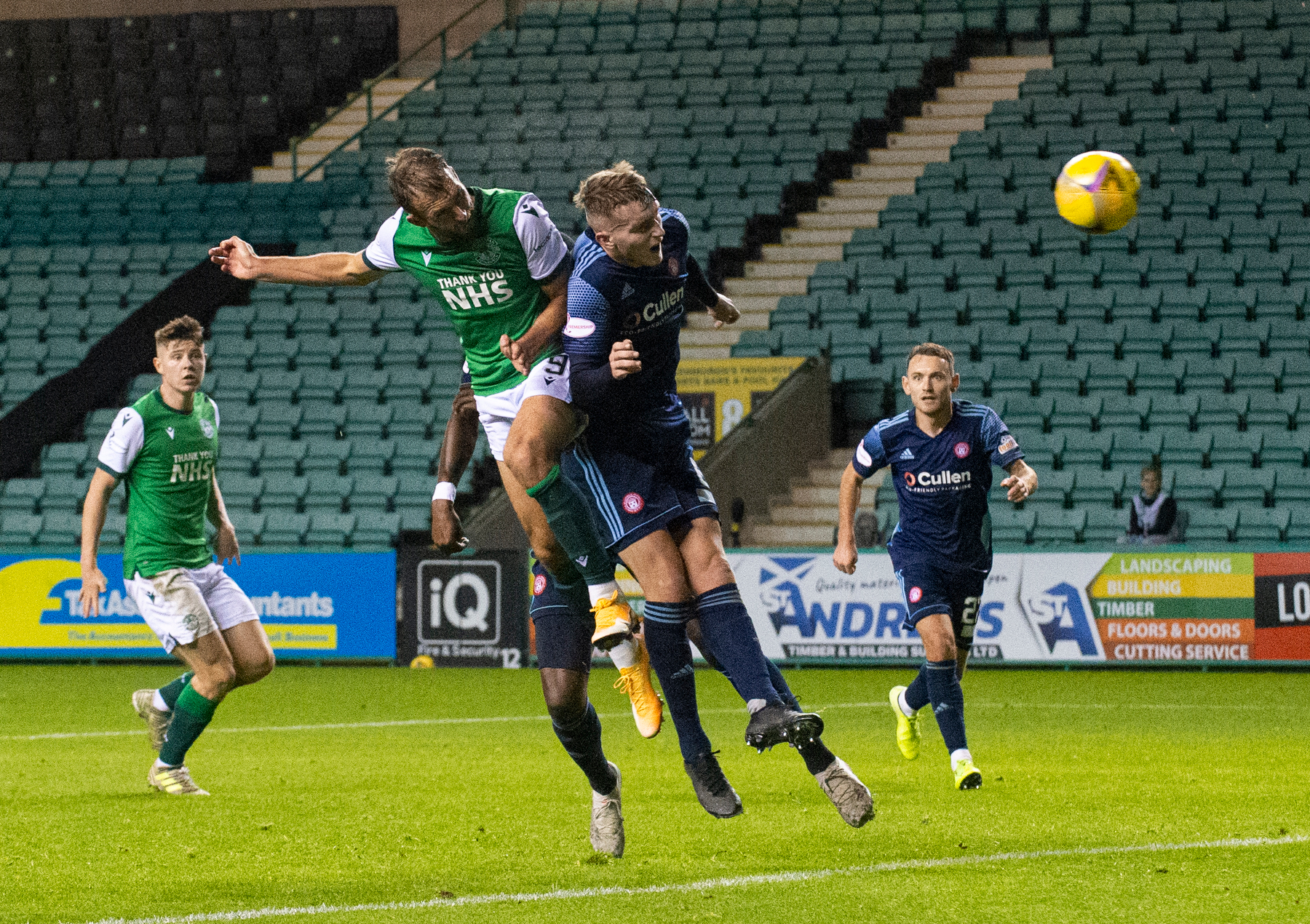 Hibs’ striker Christian Doidge is hoping to reach a career milestone this afternoon after revealing that he is currently on 99-professional goals.

The Welshman has helped the club to fourth place after the first round of fixtures and he insists that is more important than personal ‘goals’ however.

Speaking at the pre-match press conference Doidge said: “I think I’ve done OK this season. Some games I have contributed to the team and played well. I have scored a few goals in important games. The winner against Dundee (United) helped us get three points and the equaliser against Rangers. They were massive points for us. It’s been a bit on and off but I try to work as hard as I can and try to be a good team mate and that’s all that matters to me.

“The team’s been doing well and the whole squad in general has been doing good. I think we can definitely improve but what’s massive for us is how well we have defended and conceded hardly any goals.

“The only thing that a bit of a pain is that I am on 99-professional goals so I just need one for the big hundred. It’s not been praying on my mind but I know it’s there. To get the next one would probably be massive for my career. It will be nice when I finally get it so hopefully it is soon. Hopefully I can take my next opportunity when it comes.

“Turning pro at 21 and after my first full season in League 2 I didn’t think I was going to be good enough. I didn’t have a great start to my career so for seven years later to nearly be hitting one hundred so it’s definitely  a proud moment but I want to do keep improving and doing better and help my teams win games which is the most important thing overall.”

Doidge has formed a tremendous partnership with strike partner Kevin Nisbet who joined the club on the summer and he has been complimentary about the youngster.

He continued: “I’m delighted for Kevin (Nisbet). He’s been outstanding since he came in and we compliment each other quite well. He’s a natural goal scorer and has pulled his socks up so I couldn’t be more happy for him. He has a great chance of going far in the game. He’s young, strong and fast but he works his socks off and is very good in front of goal. The instinct is there. He has good movement and strikes the ball very well and hopefully I can help him improve.

“We work as a pair very well. We work hard and I think that’s the most important thing to help the team.”

Hibs dropped two points last week against Ross County despite dominating much of the game and creating plenty chances which left the Welshman ‘frustrated.’

He added: “We are frustrated as a squad that we didn’t get a goal (against Ross County). We had a lot of chances but I think it was just one of those days at the end but we didn’t concede any goals which was good for us. Another clean sheet for the boys at the back which was great and that has given us a little bit of momentum going into the next game.

“It’s frustrating. You go into every game thinking you are going to score and you do leave the game a little bit frustrated when you don’t, especially if you get a few chances but as a striker you go through these little spells and it’s down to me to work hard on the training pitch and try and make it right.

“We are working very hard on different formations and we have players on the bench who are waiting to come on and affect games.”

Doidge is anticipating a tough test this afternoon in Ayrshire. He added: “Kilmarnock and a great side. They have some really good football players. They have had some good results so it’s going to be another tough game for us but every game in this league has been difficult this year but we have to go into the game full of confidence with the way we have started this season.”