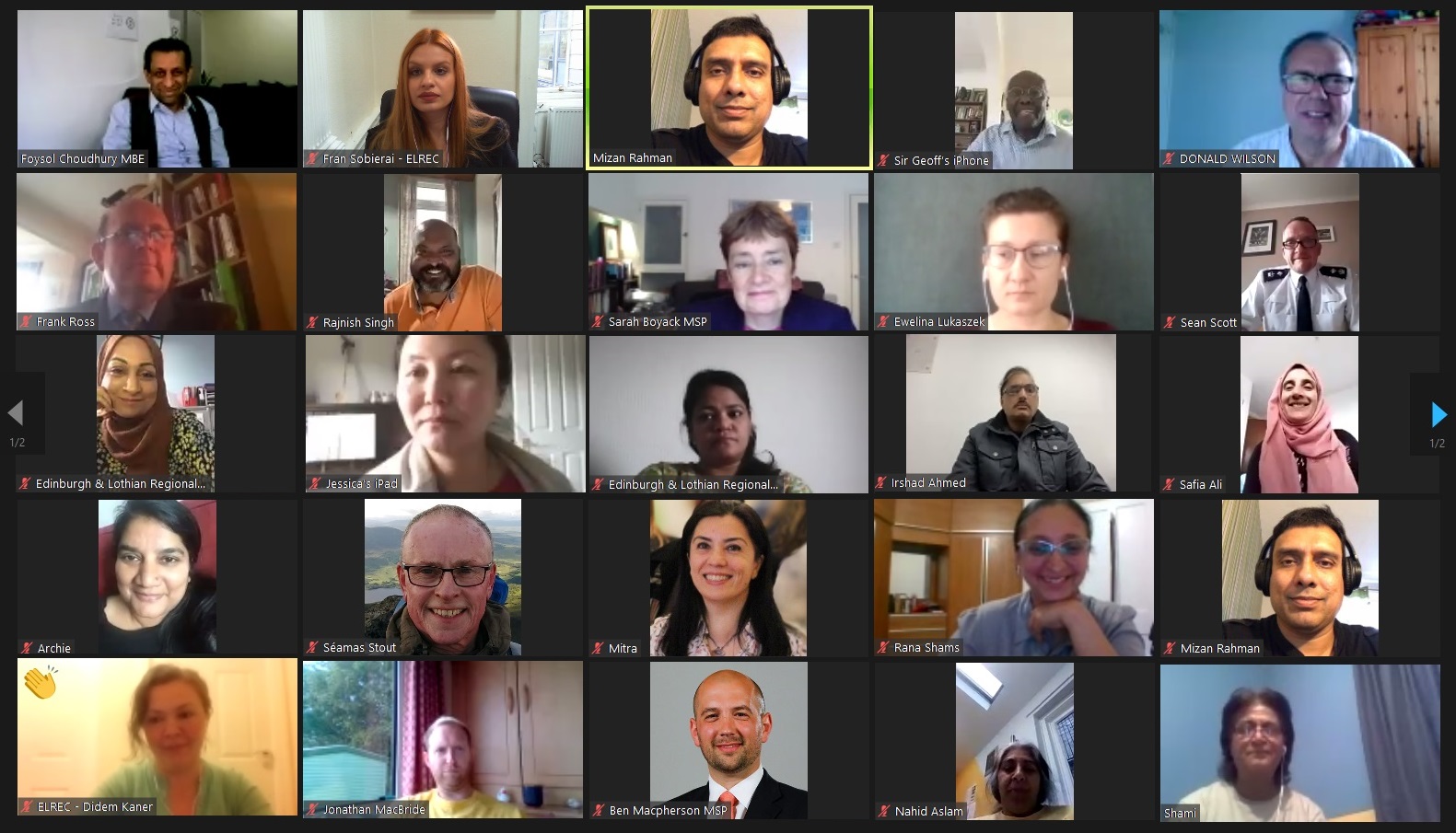 The meeting had been scheduled for March 2020, but along with many other events, it had to be postponed.

During the lockdown, Edinburgh has a provided and delivered food parcels to the vulnerable every day. ELREC has been part of that drive with its volunteers. They have worked with Edinburgh Community Food,£eith Decides and Port of Leith Housing Association to provide food parcels to local black and minority ethnic (BAME) communities in North of Edinburgh.

The AGM was hosted by ELREC Chair, Foysol Choudhury MBE who welcomed everyone and introduced ELREC’s Honorary Patron, and the Rt Hon Lord Provost of the City of Edinburgh, Frank Ross.

The Lord Provost welcomed everyone to the AGM and congratulated the community group for coming together. He said: “Edinburgh is the most successful economy in Scotland with 94 per of its population in employment. We are world centre for celebrating culture and festivals attracting 4 million visitors each year. Since March 2020, our city has been closed to protect ourselves and others from the virus and lives have been disrupted such as schooling, businesses as well as our traditions. I thank local groups for observing lockdown during the Muslim Eid celebrations and other celebrations which fell during this time.”

Sarah Boyack MSP who also attended the meeting said: “There are many lessons to be learned from this situation and one is that we cannot go back to the old way of living. We need to create a better society to what we had before lockdown, our focus has been on how to protect people from Covid particularly the vulnerable, and access to practical support for people who have lost jobs, loved ones and are really in need of help.

“Some of the issues I have been working on these past few months are that people are worried about the long term effects of Covid and the lockdown on their mental health, more testing in care homes and for care workers and support for teachers and their staff in schools and ensure that our local authorities have the resources they need to make this happen.

“I have also had lots of letters asking me what the scientific guidance is on opening religious places and supporting people in workplaces once we return to work. I can tell you that this is the busiest the parliament has ever been.

“Our governments need to work together to reduce the effect of the virus on people, find a vaccine and ensure funding for businesses is available to get our economy up and running again.

“We also had a debate in parliament on Black Lives Matter movement and three big things we agreed that need to happen were:

Professor Sir Geoff Palmer OBE is the Honorary President of ELREC. He has been very busy over the last few months with Black Lives Matter. He said: “I have given interviews for Canada, Japan and South Africa, Jamaica and other Caribbean connections and the world is interested not in me, but in Edinburgh, and what it is doing. What we are doing in our city is going worldwide and has attracted the attention on the world.

“The Henry Dundas statue in St Andrew Square has been there for 199 years and it’s taken us this long to change the plaque to include the word “slavery” on it. It may have taken a long time but its been worth it and truth be told.
“Edinburgh is a city that is seen by the world as doing something about Black Lives issue and I am grateful for ELREC for making lives better for its bme communities in Edinburgh and the surrounding areas.”

Councillor Donald Wilson – Convener Culture and Communities Committee said: “I am proud to be part of discussions on our history and making changes. Some of the silver lining has been reaction of communities and organisations who have stepped up and been involved in their local areas.
“The impact this has had on elderly and how we treat our elderly and our role and priority we have in society and role of culture on our mental wellbeing. In terms of mental health and realising role of culture has on mental health and wellbeing is essential part of our lives. Edinburgh is a world class city of culture, and Covid has had a massive impact on it, we must do what we can, culturally and civically and its vital for our wellbeing.

“Our committee had been suspended and rightly so, but is restarting soon and rightly so as it’s time to get back and argue the case for culture and strong communities.”

Ben Macpherson, MSP for Edinburgh North and Leith, said: “In support of the health service and third sector that has come together in a tremendous way has been one of the positive things to come out of this terrible situation, my condolences for those who have lost their loved ones to the virus. We need to learn the lessons from this such as how we can adapt to the changes and inequalities Covid has raised and the humanity that has strengthened the process.

“How do I support local organisations, and local businesses? Money has been made available and given quickly during this time to help with this. Recognising our own society and understanding our history to build a better society. I thank Sir Geoff for always inspiring us to be proactive and better.”

Chief Superintendent Sean Scott said: “Policing over the last four months has been something I have ever seen before. We were given new powers and had to learn quickly. I must say though that communities came together fantastically in the last 4 months, and we have not had major issues to report.
“During these rather difficult times we wanted to be as tolerant as possible and the last resort was to enforce however Edinburgh and the bme communities have been fantastic with adhering to the rules. We may not have got it right every time, but we took the right approach and have a new survey online for feedback, so please do have a look at this on our website and send us feedback.

“Going forward we closely monitor social tensions and are working very closely with our partners so that we can provide the right protection service to our local communities.
“Crime is dramatically down last number of months, but anti-social behaviour has increased but not any great levels to cause any worry.

“I thank ELREC and other partners for their continuous efforts and support making our work easier.”

Four board members retired this year. Mrs Shana Rams and Mr Irshad Ahmed were elected as new board members, and Mrs Magdalena Sajnaga and Cllr Carl John were re-elected.