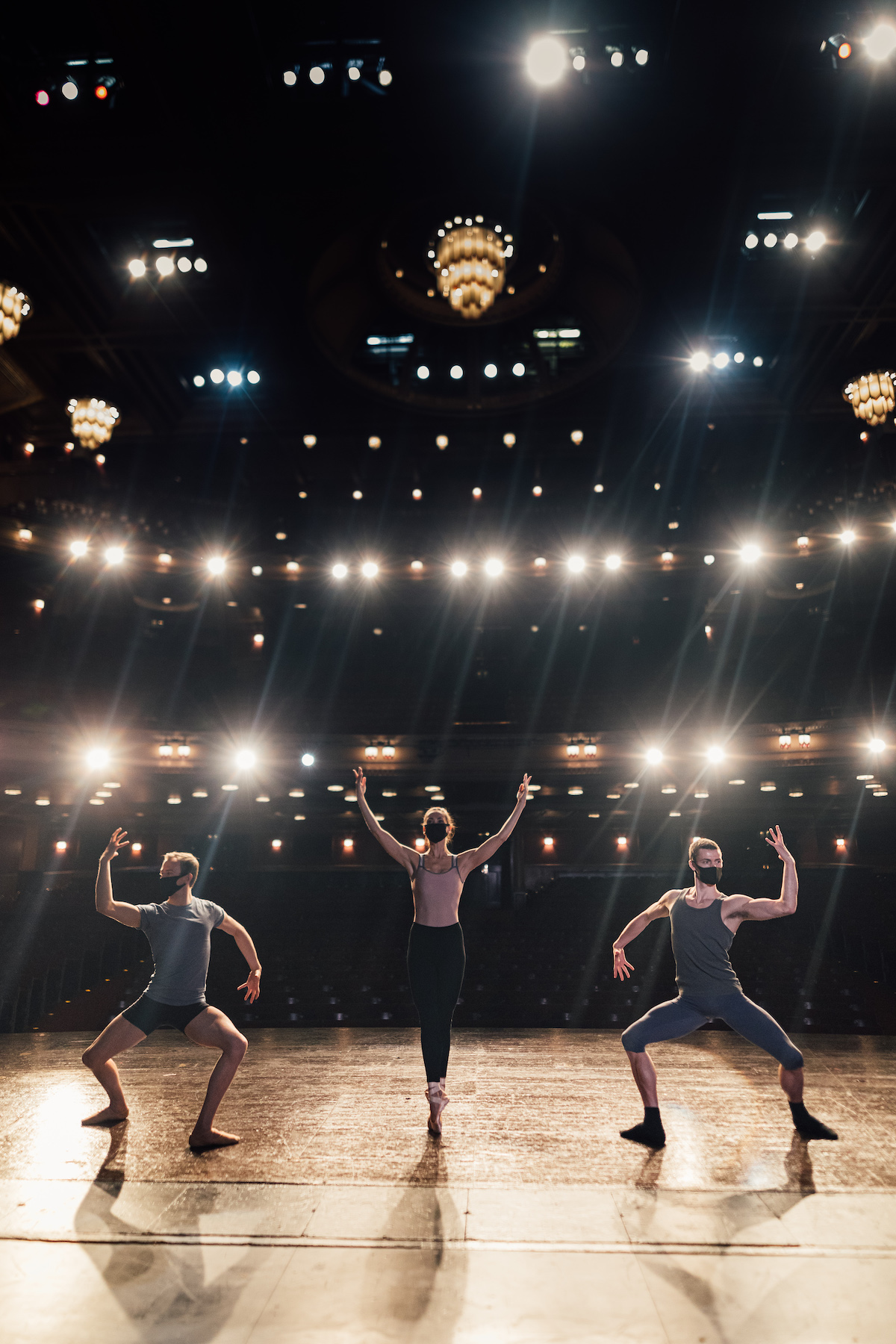 As the 73rd Edinburgh International Festival would have been about to start, the EIF has revealed its virtual replacement beginning from Saturday 8 August 2020. The aim is to shine a light on Edinburgh, and the venues where its festivals would be.

In this virtual world, rather than audiences gathering, films will be shown on the BBC and the Edinburgh International Festival’s Facebook page and Youtube channels. These are creations made at some of the venues normally used each summer, and will feature those who might have been here.

At a photo call this morning Ryan Buchanan took images offering a flavour of what is to come:

Using the Castle Esplanade, Festival Theatre and Usher Hall there will be also be a light installation with beacons of light marking what would have been the opening weekend of the festival.

Fergus Linehan, Director of the Festival told us he hopes this will allow Edinburgh to send out positive images to the rest of the world of the creative industries here, and emphasised that all of the recorded performances have been made respecting all sorts of safety guidance.

He explained: “This was where we thought we could be useful, because what was needed were very, very strict protocols and ways of working. When you see the films we’ve made you’ll see in terms of orchestras, for example, the spacing between them. We thought about the ways in which venues were operated and the ways in which people arrived and left for the recordings. It was very complex, but I think what we’ve done is nudged forward in the right way.

“This is going to be a long, slow difficult journey back to where we were, but this was really what was needed at this moment in time. We are in no fit state to be able to say let’s just bring the audiences back, but it was needed for the sake of the industry. What was also crucial for our industry was that we could create some paid work for a range of people.

“Over the next 12 months that’s going to be the challenge, to find ways of creating work that has value for the city and value for the community. And we need to make sure that these people are engaged creatively and professionally.”

The range of films will include a love letter to Scottish Theatre from the National Theatre of Scotland directed by Hope Dickson Leach and co-conceived with NTS Artistic Director Jackie Wylie and dramaturg Philip Howard. Also Scottish Opera’s modern day interpretation of The Telephone starring Soraya Mafi and Jonathan McGovern filmed in the King’s Theatre bar. This is a tiny 25 minute opera.

The RSNO with mezzo soprano Karen Cargill will be shown in a recorded performance led by Thomas Søndergård making his EIF debut. Scottish Ballet also feature in a series of films with new work by choreographer Nicholas Shoesmith and the Scottish Chamber Orchestra (SCO) present Beethoven’s Second Piano Concerto to mark the 250th anniversary of Beethoven’s birth. The SCO gathered and performed on the stage at the Festival Theatre.

Lenehan expanded on the wide range of the arts which will be featured: “We’ve also got the new Nicholas Shoesmith commission with Scottish Ballet and their dancers. And then we’ve got people like the great fiddler, Aidan O’Rourke, with a range of traditional music down at Leith Theatre.

“In each case we’ve made a beautiful film and the filmmaker has created a gorgeous project with the National Theatre of Scotland which is a whole kind of homage to where Scottish theatre is at the moment. All these different people have gone and made these beautiful little videos – sometimes quite small and sometimes quite grand – and in every case you will be able to see them from Saturday 8 August onwards.”

There will be a light installation at Usher Hall, ,Edinburgh Festival Theatre, Bristo Square and Castle Esplanade. Hundreds of beams of light will reach up into the night sky and every venue will be lit from within by glowing lanterns.

Fergus told us about the thinking behind it. He said: “It all culminates on Saturday evening in an idea we had, which started when we were thinking about how the lights have gone out. We have asked some lighting designers to come back in and say, ‘Well, what if rather than the lights going out, the venues lit up?’

There will be lighting of the venues from from within from the foyers out into the street, but then also up into the night sky. So if you’re walking around on the opening weekend, if you’re going by any of these venues, rather than them being dark, you’ll probably find that they’re kind of blazing with light. This is just a symbol we wanted to send out to the world, that you know, this kind of resilience is there, and we’ve called that project My Light Shines On.”

This is where the difference from previous years is most apparent. Previously the son et lumier events such as that trained on the Usher Hall a couple of years ago encouraged people to gather in Festival Square to watch an event. This will be an evening when you might be able to see the beacons of light if you are say, in a high place at home or just sauntering round the city. Linehan says this one will be an opportunity to send out some photos and films out into the world, because there have been a lot of newscasts with a journalist ‘standing on an empty Royal Mile looking a bit forlorn’. He said: “We just want to capture this and remind people that all of these artists and all of these creative people and this festival world is still here.”

BBC Scotland TV will feature a one-hour gala film hosted by Kirsty Wark and cellist Su-a-Lee as a preview to My Light Shines On.The film will be shown on EIF YouTube as well. There will be some famous faces from all the festivals and the Tattoo over the years.

The 120 members of the Festival Chorus will feature in films to be shown on 8 August, all of them appearing from their own homes with a brand new recording of Carll Orff’s Carmina Burana.

Then from 10 to 28 August the activity continues with a sound installation broadcasting classical music in Princes Street Gardens each lunchtime for 40 minutes. The full concert series will also be released on the EIF YouTube channel and on Classic FM.

There are full details of these and all concerts to be shown throughout August and also The Edinburgh International Culture Summit conversations on the EIF website.

Fergus concluded: “For most of use the past few months have been a time spent at home. For some, a time spent with family and for many a time overcoming adversity. For artists, home can mean different things:there are the buildings where they live and the relatives and friends they love. But beyond these there is another home and another family at the centre of their creative lives. This home is the concert platform, the proscenium arch and the rehearsal room. This family is their fellow actors, musicians or dancers as well as directors, choreographers, conductors, designers, technicians and stage managers. Covid-19 has not dimmed the creativity of our artists, but it has physically isolated them from each other.

“For the first time since lockdown, orchestras, ballet companies, traditional musicians, theatre ensembles and designers have come together to perform in and light up the venues they love. This has been achieved with great care to ensure the safety of all involved. It represents a cautious but essential step towards the re-emergence of the performing arts in our country.

“The programme of events that we announce today is not so much a curated season as a re-union. It is time for our artists to make theatre together, to play music together, to sing together, to dance together and to light up the skies together.

“We are working hard to engage and employ artists and freelance workers in the festival ecosystem and to help companies take the first steps in performing together in venues. Through these projects, we are providing employment for over 500 Scottish artists, creatives and technical staff. To all who have participated and those who have supported them, thank you.”

Sadly there will be no Festival fireworks to end the month of August, as that would have required a performance licence which is just not possible at the moment. But then the cautious approach of the government is something that Linehan says he is very grateful for. 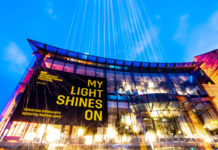