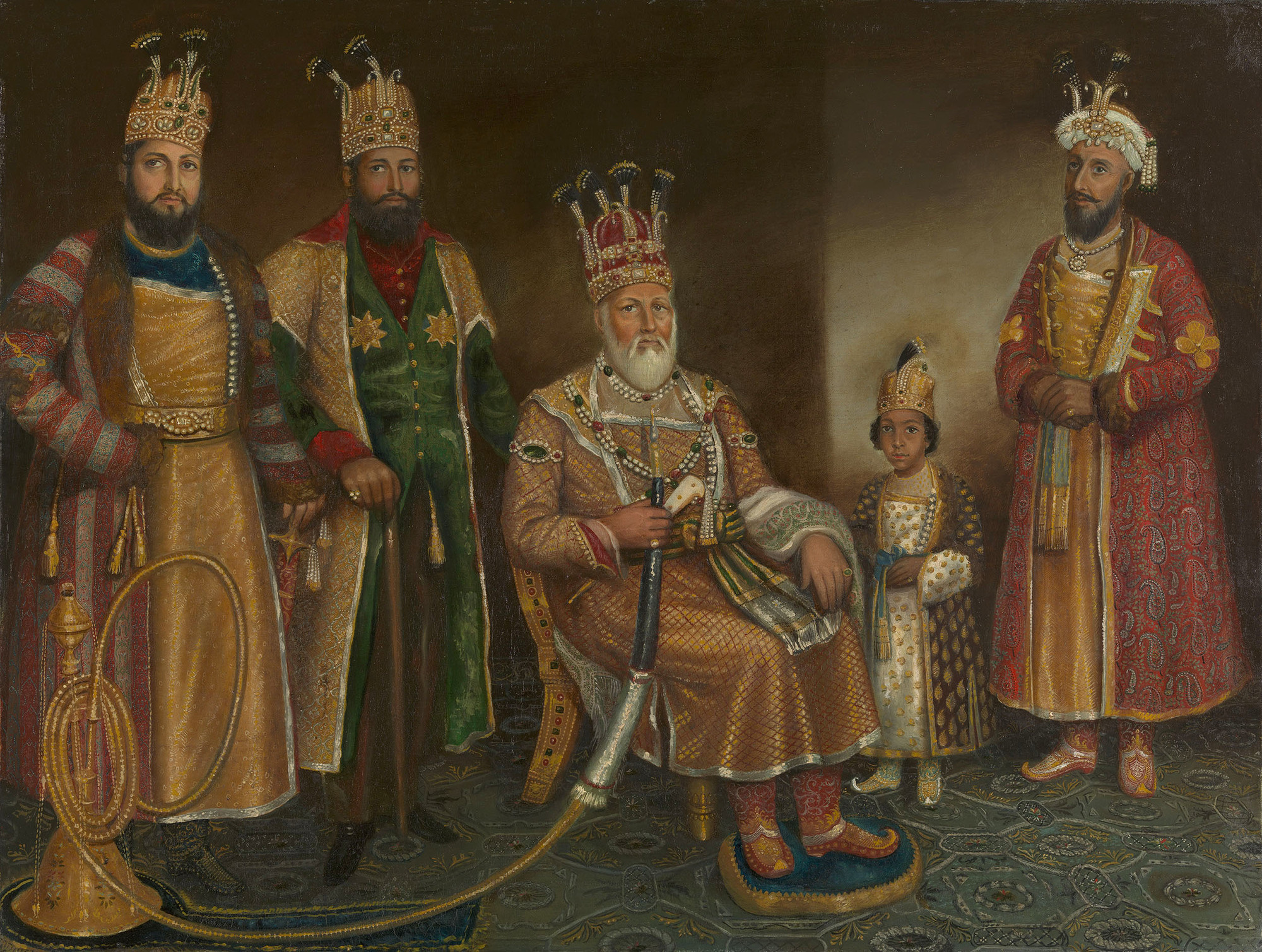 Despite her huge interest in the subcontinent, Queen Victoria never visited India.

The Queen’s son, Prince Albert Edward, undertook a very successful tour in 1875/76 – and indeed it was partly as a result of that tour that the Queen was given the title Empress of India upon his return.

The first reigning British monarchs to set foot in India in 300 years were the Queen’s grandson, King George V, and his consort Queen Mary.  (Their trip – the second they had made – took place in 1911, 36 years before the official ending of British rule, but the writing was on the wall long before that.)

Yet there had been a close relationship between the British monarchy and the rulers of South Asia for over 400 years.

A new exhibition at The Queen’s Gallery in Edinburgh, Eastern Encounters: Four Centuries of Paintings and Manuscripts from the Indian Subcontinent, explores that relationship and brings together some outstanding examples of the South Asian works of art held in the Royal Collections. Portraits, depictions of the Mughal court, ceramics, jewellery, drawings, photographs, prints and architectural studies are included in this spectacular celebration of a connection that endures to this day, while new works from contemporary British poet, artist and filmmaker Imtiaz Dharker provide a modern day response to the exhibits and the stories behind them.

Curator Emily Hannan said: “The challenge I faced was just how to tell the story of such richness and diversity.”

Her solution was to do so through a series of cultural encounters, and of often enduring personal relationships, between members of the Royal Family and Indian rulers – for this was not, Emily emphasises, just a one-sided story.

The first section of the exhibition, Early Encounters, focuses on the art of the great Mughals. From the 1500s this dynasty ruled huge swathes of the Subcontinent. By the 17th century, while the Stuart Monarchy charted a period of instability and financial difficulty back in Britain, the Mughal Empire was enjoying its Golden Age – it was richer and stronger than any European power and ruled over 150 million people. Exhibited here is the Padshanama (‘Book of Emperors’), commissioned by the fifth Mughal Emperor Shah-Jahan and presented to George III by Lord Teignmouth, Governor General of India, as a gift from the Nawab of Awadh.

The Moghul court was an international centre for art. A painting of Sir Thomas Roe, an early (1615-18) ambassador to the court, shows him presenting gifts to Emperor Jahangir. Roe needed to gain the Emperor’s protection for the benefit of the new East India Company. It wanted to get its hands on India’s textiles, but had met with opposition from well-established Portuguese traders. Gifts were a very important part of Mughal diplomacy, and Roe’s were considered extremely substandard (it had, after all, taken him a year just to get there). On seeing the superior offerings of the Iranian ambassador (’27 horses, seven camels, an array of embroidered velvets, silk carpets, Venetian glass, jewel-encrusted swords and daggers, and casks of fine wines’) Roe wrote to James I to tell him he needed to up the ante. Jahangir was eventually appeased but made it clear he expected better next time.

The Day of Judgement is referenced in both the Bible and the Quran. A painting by two Mughal artists, Nanha and Manohar, reinterprets an earlier Flemish work by Adriaen Collaert. There are also exquisite miniature portraits of various Mughals and their family members.

Unlike European miniatures of the time, these show the whole body rather than just the head of the sitter. Other large miniatures of emperors hunting, presiding over huge processions, or appearing on their balconies, show the full cross-section of society, from elephant handlers to artists, dancers and musicians.

This section also includes items of Mughal decorative art. A purple turban ornament is inscribed in Persian with the names of its previous owners. It was presented as a coronation gift to King Edward VII by Maharaja Sir Hira Singh of Nabha in 1901.

The second section of the exhibition covers the 18th century. Its paintings and manuscripts explore the history of the East India Company, and it includes gifts given to Kings George III and IV as symbols of their success in India, and as requests for royal intervention with the Company, whose power and confidence had grown.

The Company now had a representative at every court in the Subcontinent, there to pull strings and encourage treaties in favour of his employer. At the same time, the Company itself sent many gifts to the reigning monarchs. A miniature Quran scroll – over 3.5 metres long but only 5cm wide – may have been presented to George IV by one of the Nawabs of the Carnatic. The scroll is housed in a sandalwood case out of which it can be rolled by turning ivory handles. Every chapter of the Quran fits in because it is written in a tiny naskh script known as ghubar (‘dust’), which was initially developed for sending messages by carrier pigeon.

In the late 18th and early 19th centuries Mughal artists often adopted European techniques and materials. Emperor Akbar Shah (one of 70 children of Emperor Shah Alam) sent an oil painting of himself and three of his sons to George IV in an attempt to persuade the King to intervene on his behalf with the aggressively expansionist East India Company. By now, both Delhi and Agra had fallen to the Company, and the Emperor had little military power, with just a small allowance and the right to remain in the Red Fort. Akbar Shah sent an envoy to King George with a letter explaining that he was:

‘compelled to drag on a dependent existence in a dilapidated Palace […] with means utterly inadequate to support the dignity even of a nominal sovereignty.’

Despite his much reduced circumstances Akbar Shah was still revered by his people, and kept up ceremonial and courtly traditions. The painting shows all four figures decked out in their royal finery. The Emperor himself holds the pipe of an extremely long hookah. Akbar Shah was not entirely satisfied with the European style of the portrait; he especially disliked the shadows the artist had drawn in under his nose, telling him that:

‘it looks as though I have been taking snuff all my life; and it certainly has a most filthy appearance, besides, it is all awry, as I told you when you began upon it!’

The third section of Eastern Encounters looks at the reign of Queen Victoria. During this period the East India Company had collapsed and under the Government of India Act 1858 all of its assets had been transferred to the Crown.  The Queen was fascinated by India, and loved to receive gifts from the Subcontinent, although extravagant ones were discouraged. A particular treasure was a miniature Quran manuscript inside a necklace. The gold locket, studded with rubies and diamonds, is thought to have belonged to Zinat Mahal, wife of the last Mughal emperor.

Exhibits in this section also include the Ishqnama, an illustrated autobiographical manuscript by Wajid Ali Shah, the last King of Awadh (now part of modern day Uttar Pradesh). Wajid Ali Shah was one of the first Indian rulers to have a photographic studio, and the illustrations of his wives (shown, with him, listening to a musical performance) are based on their photographs. The manuscript survived the storming of the Lucknow palaces in 1858; Sikh soldiers gave it to Sir John Lawrence, who in turn presented it to the Queen.

Prints and photographs now began to transform cultural life in India. Queen Victoria was also very keen on colour photography, and the exhibition includes an image of two of her own Indian servants, one of whom, Abdul Karim, later became her personal secretary. In 1897, her Jubilee year, the Queen also started to learn Hindustani (Urdu) with Karim. She enjoyed conversing with Indian guests and officers in their own language, and one of her notebooks and her dictionary/phrase book also form part of this section.

Divine Encounters, the fourth section of Eastern Encounters, displays Hindu works of art acquired by Prince Albert Edward during his 1875-76 tour. In Bombay the Prince was invited by Mangaldas Nathubhai to the wedding festivities held for his two sons. Nathubhai presented him with three albums of paintings of Hindu deities.

The final section of the exhibition, entitled Encountering the Raj: tradition and modernity in the early 20th century, focuses on visits to India by members of the Royal family, most notably King George V and Queen Mary. During the royal couple’s Coronation Tour in 1911 a Coronation Derby (the ‘Delhi Durbar’) was held, at which the King was proclaimed as Emperor of India. Part of the purpose of the tour was to reduce the growing opposition to British rule (although George V himself supported Home Rule even at this stage).

The following day the Royal couple arrived at the Red Fort, where they, in full regal attire, waved to the crowds from the balcony once used by the great Mughal Emperors. A photograph of this event is on show, but the crowds are largely out of shot. It is, said Emily Hannan:

‘An image of the end of Empire.’

In addition to the many works of art they acquired, the King and Queen assembled personal photograph albums and scrapbooks of their time in India. Some of these are displayed, along with a watercolour by the founder of the Bengal School (a centre of the Indian Modernist movement), Abanindranath Tagore, presented to Queen Mary as a parting gift by the Vicereine, Lady Hardinge. By now there was widespread questioning of existing power relationships in both intellectual and culture spheres.

Tagore’s Tissarakshita, Queen of Asoka, depicting a woman who has accidentally poisoned the sacred Bodhi tree, looks back to earlier Chinese and Japanese artistic traditions, deliberately rejecting the Western style of art taught in the government schools of the time. Emily Hannan describes it:

‘new art for a new and modern India.’

Eastern Encounters: Four Centuries of Paintings and Manuscripts from the Indian Subcontinent is open now and until 31 January 2021 at The Queen’s Gallery, Palace of Holyroodhouse, Edinburgh.

The accompanying publication Eastern Encounters: Four Centuries of Paintings and Manuscripts from the Indian Subcontinent is published by Royal Collections Trust at £29.95. It may be purchased from the Gallery shop or via the RCT website.

Owing to the current COVID-19 situation the Gallery is limiting the number of visitors admitted at any one time, and strongly advises booking in advance via the Royal Collection Trust website here.