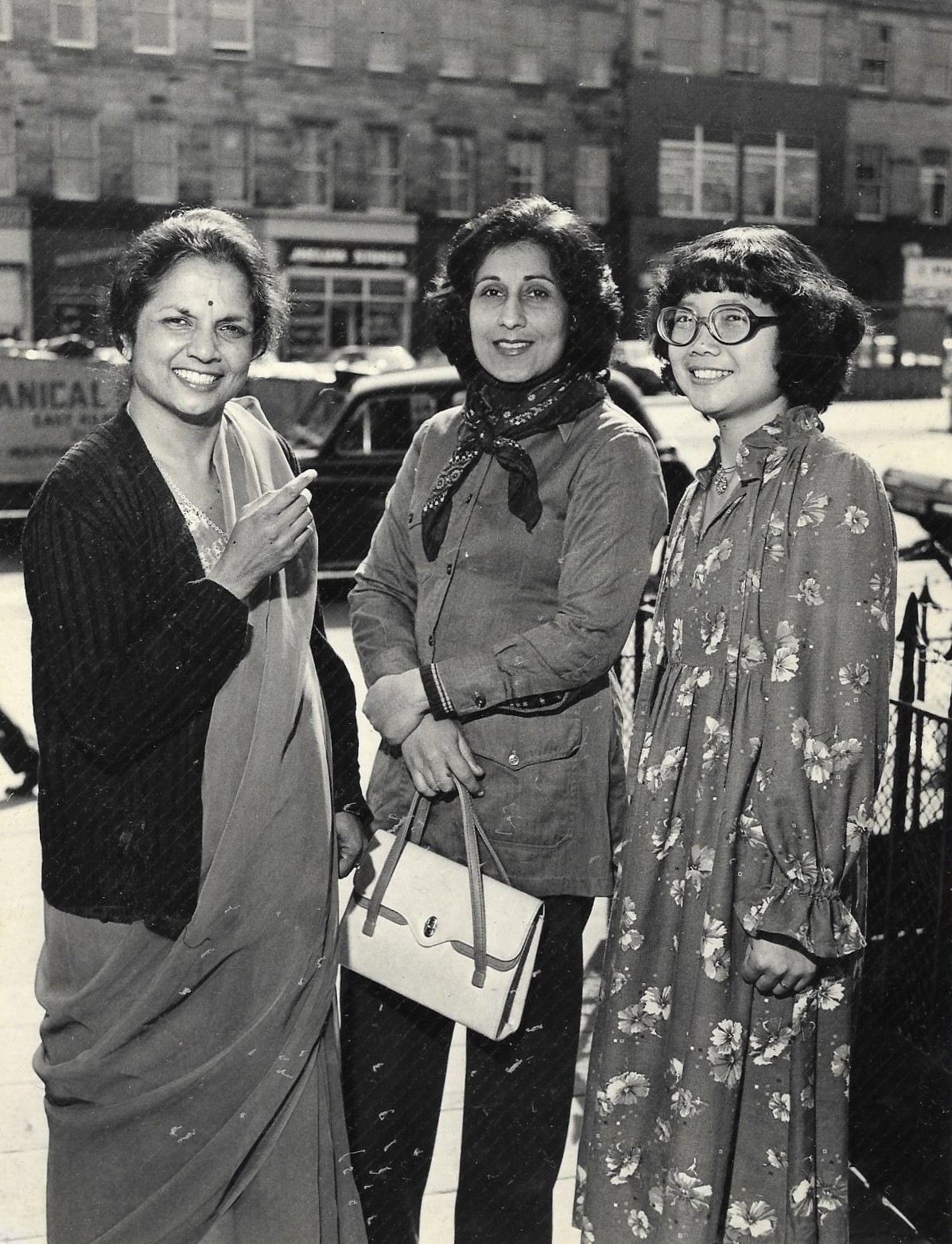 She died recently at the age of 82, and is someone who contributed a huge amount to Edinburgh and the way that race was regarded by people living here.

Born the youngest of eight brothers and sisters she was brought up in the Indian sub-continent during its most turbulent time in history – Partition. After Partition the family moved to independent India.

In the words of her son, Vineet: “Her tenure as the leader of LREC was undoubtedly her finest hour. Spearheading the strategic work undertaken by the organisation placed her at the forefront of race relations in Scotland. She rose to the challenge with typical aplomb, rapidly becoming an authoritative – and highly visible – figure in the ongoing campaign for racial equality and social justice.”

Mrs Lal came to Edinburgh from Gujranwala, now Pakistan, by way of the newly independent India in 1947. After her marriage she went to live in Madras, Singapore (her first experience of living in a multi-racial society) and then Birmingham in 1968 where she first experienced racism. She had migrated to the UK with her engineer husband Amrit Lal and they moved to Edinburgh in 1969. Armed with her MA in Economics from Panjab University in Chandigarh, she first attended Moray House where she trained as a teacher. She taught at South Morningside Primary School for three years, and then moved into the field of work which occupied most of her life – dealing with racism and women’s rights.

Saroj never shied away from confronting the authorities head-on, negotiating with a daunting range of public and third sector agencies – including the Home Office, Lothian Health Board and Prison Service – to champion the cause of equal opportunities. Saroj identified a significant gap in the provision of services for the ethnic elderly, and negotiated with both the Social Work Department and Age Concern on their behalf. She successfully obtained funding and support for the establishment of MILAN, a project for the elderly from the Indian sub-continent and Mauritius, begun in collaboration with Pilmeny Development Project. Her work with the Prison Service was focused around equal opportunities too: she worked with Saughton Prison to provide ethnic minority prisoners with library books in mother tongue languages, food that catered to their specific dietary and religious requirements, and ensuring that their religious needs were catered for.

She was deeply influenced by her father, the politician and freedom fighter Behari Lal Chanana, his role in the struggle for independence, and his liberal views on democracy, equality and women’s rights.

Saroj pioneered a number of new initiatives and projects to support Edinburgh’s various ethnic communities and their growing religious and cultural needs. She was instrumental in the founding of what is now the Edinburgh Hindu Mandir, at a time when there were no permanent premises and just a handful of Hindu families in the city; she worked with Mortonhall Crematorium to install religious symbols of all faiths; and with the City of Edinburgh Council to identify a site for the dispersal of ashes in flowing water for those of the Hindu religion. Working with the Royal Infirmary of Edinburgh, she established The Sanctuary as a multi-faith place of worship, and was an active member of the Edinburgh Interfaith Group, the Scottish Interfaith Consultative Group and the Interfaith UK Network. One of her career highlights was being invited to address the General Assembly of the Church of Scotland, speaking about her life and career as a Hindu woman in Scotland to hundreds of delegates.

Throughout her various roles in Edinburgh, support for the city’s diverse ethnic groups in terms of their ongoing concerns and issues – immigration and nationality, refugees, domestic violence, mental health, adoption and fostering – remained a constant theme.

Education, and access to education for women and girls, was another key priority. She worked closely with the local Sikh community to persuade and encourage those who held more traditional views to let their girls continue in secondary and further education, and in order to win the respect of their parents and elders she started the first-ever Asian Cultural Girls’ Club at Drummond Community High School. She set up the Continuation Course for Asian girls at Telford College, providing a gateway to higher education, and took a group of Asian young people on an educational trip to Munich. Drummond was also the venue for music and dance classes: Saroj had studied Indian classical music at university, and she was quick to identify local talent that would eventually make an invaluable contribution to the cultural life of the city – through Saroj’s encouragement, Priya Shrikumar was inspired to share her expertise in Bharatanatyam, leading ultimately to the formation of Dance Ihayami. Throughout the 1970s and 1980s she visited schools in order to promote a better understanding of the changing multi-cultural and multi-facial face of modern Britain, supporting the Education Department in developing teaching materials and organising visits to local places of worship. She was also a board member on the Scottish Arts Council, and a key player in the arts programme for the Commonwealth Arts Festival held in 1986.

It was, however, her trailblazing work with Lothian and Borders Police that was arguably her greatest achievement: defining the nature of racial attacks and monitoring racist incidents, implementing robust reporting systems, developing police training and encouraging recruitment from minority communities. It was a tribute to her standing and stature that she became the first Asian woman JP in ­Scotland.

She joined LREC in 1980 and became Senior Community Relations officer in 1988 and eventually Director in 1990.

Former Rt Hon Lord Provost of the City of Edinburgh, Lesley Hinds said:”Saroj Lal was a champion for race relations and social justice both in Edinburgh and Scotland.

“Her work with Lothian and Borders Police that was one of her greatest achievement, along being the first first Asian women to be appointed as a Justice of the Peace. Saroj’s achievements were all the more remarkable given what was predominantly a male world and an often sexist environment. “

Saroj’s achievements were all the more remarkable given what was predominantly a male world and an often sexist environment. Yet she clung to her long-held principles, striving to win the trust of orthodox Asian parents and encouraging girls to pursue their education by creating the Asian Cultural Girls’ Club at Drummond Community High School and the Continuation Course at Telford ­College. As Kaliani Lyle, former head of Citizens Advice Scotland, said: “Saroj was a feminist – bottom line. A woman who cared for and about other women. She embodied it, lived it, practised it.” Decades before #MeToo, Saroj was ahead of her time.

Always impeccably dressed in her trademark sari or salwar kameez, with a matching bindi and slash of red lipstick, Saroj was a force to be reckoned with. But she was also incredibly warm and funny, often irreverent and mischievous, and immensely proud of her family. She enjoyed a particularly special relationship with her granddaughter, Isha, and there was no prouder moment for Saroj than when – in August 2014 – Isha become a pupil at George Heriot’s School, fulfilling a long-cherished dream.

Saroj Lal has touched the lives of many, both in Scotland and far beyond, and generations to come will be grateful for her gifts to the city that was forever close to her heart. She is survived by her husband Amrit, son Vineet, daughter Kavita and granddaughter Isha.

Her son Vineet said: “Saroj and Isha shared an exceptional bond, and there was no prouder moment than when, in August 2014, Isha entered George Heriot’s School, thereby fulfilling a long-cherished dream.

“One of her final conversations was with Isha, who was so excited to tell her that she’d got 29 out of 30 for her English test. Saroj’s eyes sparkled with delight, as they always did, and although she was clearly very unwell, she still wanted her to go upstairs and get on with her revision. Isha was the apple of her eye, and I know that seeing her grow up gave her enormous pleasure in her later years. Saroj leaves a gap that is impossible to fill; but we will always remember the good times we shared, the laughter and tears, and all the wonderful memories that she has left us as her legacy.”

Saroj was also a devoted wife, and a loving mother and grandmother. She and Amrit enjoyed 57 happy years of marriage. She was immensely proud of her family: of Kavita and her steadfast commitment to Fairtrade as a staff member at the One World Shop for almost thirty years.

“Saroj was no pussy cat.  She took on the establishment, talked back, made it possible for us to tell our own stories.”

“Saroj was a trailblazer and it was on her shoulders that many of us stood in the fight against racism in Scotland. We listened to Saroj and we learnt.”

From Selma Rahman:“I watched how you worked tirelessly for individuals, for families, for communities, for the LREC members, with your  staff and  Board. I remember how you built alliances, brought people, councils, and organisations together to fight racism, to identify and promote the required change, both legislative and societal. It didn’t matter that you ruffled feathers or weren’t always popular when you stood up for what you believed in. What mattered was the support and solidarity, the quality of life, yes, for our communities but for wider society too.”

Sir Geoff Palmer, Honorary President of Edinburgh and Lothians Regional Equality Council (ELREC) told The Edinburgh Reporter: “I was in the process of writing an article on the Windrush Generation when I noticed your request to say a few words about Mrs Lal. I put my article aside because it is a great honour to praise Mrs Lal for her significant contribution to race relations in Edinburgh and the Lothians. I was a Board member of ELREC when she was appointed in 1980. She worked imaginatively to transfer race relations from a police activity to a community activity. This improved race relations in the community which helped to develop the concepts of inclusion and diversity. Mrs Lal was a first light of racial equality which we can still see today.”

You can listen to the episode of Last Word featuring Saroj here.