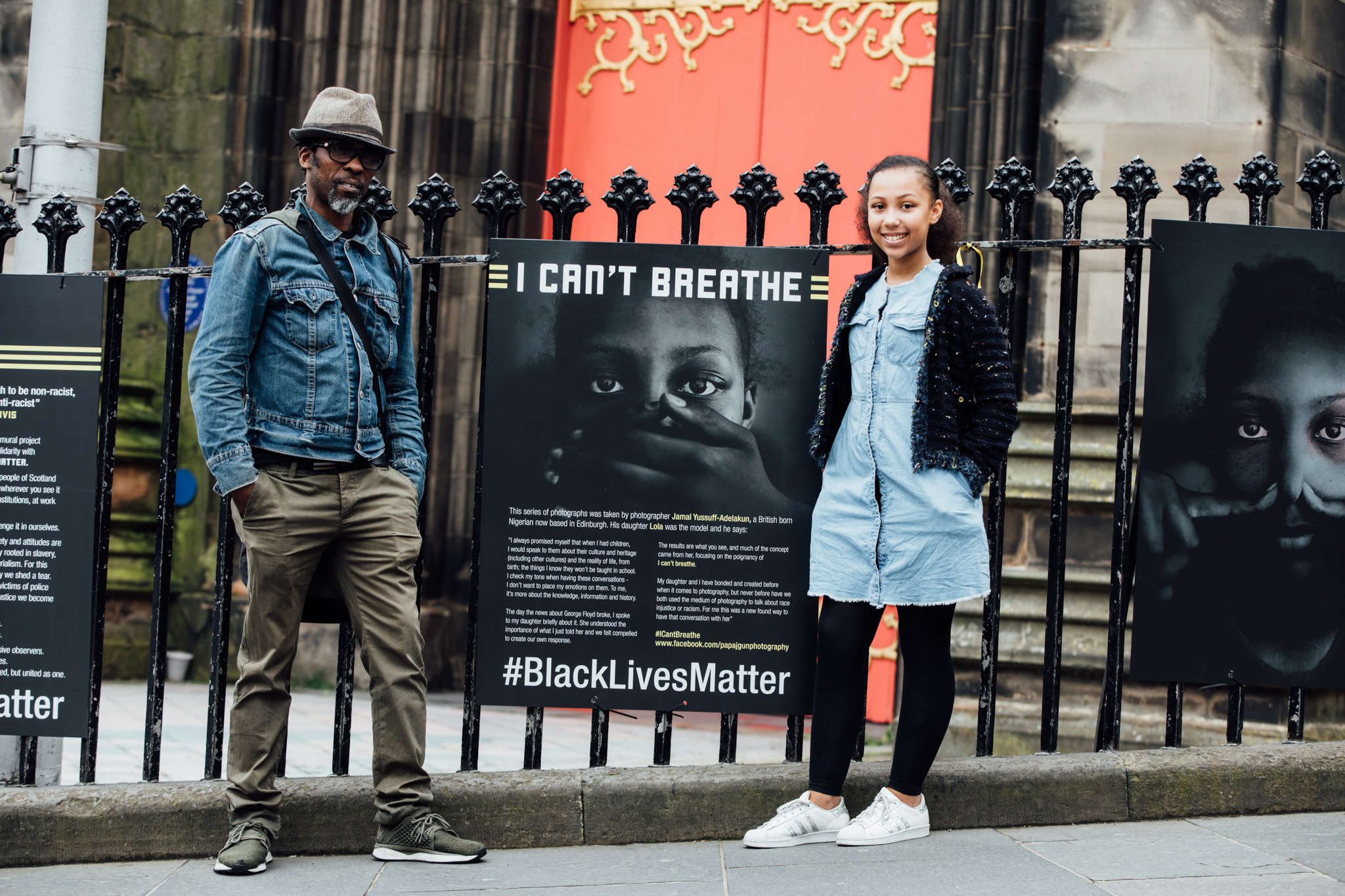 Scotland’s BAME artists have stepped up, supported by leading arts organisations to produce a mural trail in the capital and across Scotland.

The artworks forming the Black Lives Matter Mural Trail have begun popping up with displays on a dozen arts venues and sites in Edinburgh, Glasgow and Inverness, with many more to follow.

Art is powerful and at a time when all Scotland’s venues are closed for the foreseeable future, they can still have a voice by offering their walls and doors to be used for this dramatic, vital statement of support for Black Lives Matter.

The artworks – colourful, challenging, moving, powerful and diverse – inspired by the themes of I Can’t Breathe and Black Lives Matter, will be created by artists from Black, Asian and Minority Ethnic backgrounds, all living in Scotland.

Several will be supported by additional exhibitions with local relevance. They will be in a variety of media including paint, photography, video and digital art, in a wide range of styles, including fine art, street art, text, illustrative and abstract.

The artists come from a wide range of backgrounds (including Cape Verde, Nigeria, Zimbabwe, Papua New Guinea, Pakistan/Harris, USA), some trained, some self taught, combining youth and experience, individuals and artist collectives – all uniquely talented. All will be large scale and hard to miss!

The trail is the brainchild of Edinburgh based creative producer Wezi Mhura (Iron Oxide, Struileag (Commonwealth Games 2014), AfriFest, Edinburgh International Festival) a specialist in large scale events, who pulled the idea together in just over a week, with the support of venues and arts organisations including Edinburgh International Festival, Dance Base, Queen’s Hall Edinburgh, Eden Court Theatre, Glasgow’s King’s Theatre and Theatre Royal, and many more.

One of the first to go up is at The Hub Edinburgh, which will feature art based on an original photograph by British born Nigerian photographer Jamal Yussuff-Adelakun, which he created with his daughter Lola. There will also be a series of other photos from the same session.

Scotland’s society and attitudes are shaped by its history rooted in slavery, colonialism and imperialism. There are reminders of it in every major city, in statues and buildings which were built by profits from the slave trade. There is a wide debate opening up about how that should be represented. This Scottish Mural Trail shows a way that art can be at the forefront and stimulating the conversation, while also adding an exciting new dynamic to currently boarded up venues.

Wezi Mhura: “The Scottish Government says it recognises the strength in its aspirations to a more equal and more diverse society going forward, and we hope this Mural Trail will help to start the conversations that need to be happening now. It’s been amazing to connect in with so many talented artists (with roots in so many different places) who have been so enthusiastic about getting behind this project”.

Jamal Yussuff-Adelakun: “My daughter and I have bonded and created before when it comes to photography, but never before have we both used the medium of photography to talk about race injustice or racism. For me this was a new found way to have that conversation with her.”

British born Nigerian; Grew up in London till the age of 4, then Lagos then back to London from 17/18 yrs. Music lover, now based in Edinburgh. His daughter Lola (model) is Nigerian Scottish, 12years old, student, sister, passionate dancer (Tap, Modern, Hiphop, Ballet), keyboardist

Born in the Cape Verde islands now living and working in Edinburgh, UK.

Rudy, who goes by the name “The Neon Requiem” is a graphic artist of Cape Verdean and Portuguese origin. Having moved to Scotland at age 12 from his hometown of Lisbon, he began, as a teenager, to teach himself graphic art. His work has been continually inspired by the LGBT community of which he is proudly part of as well as by his parents