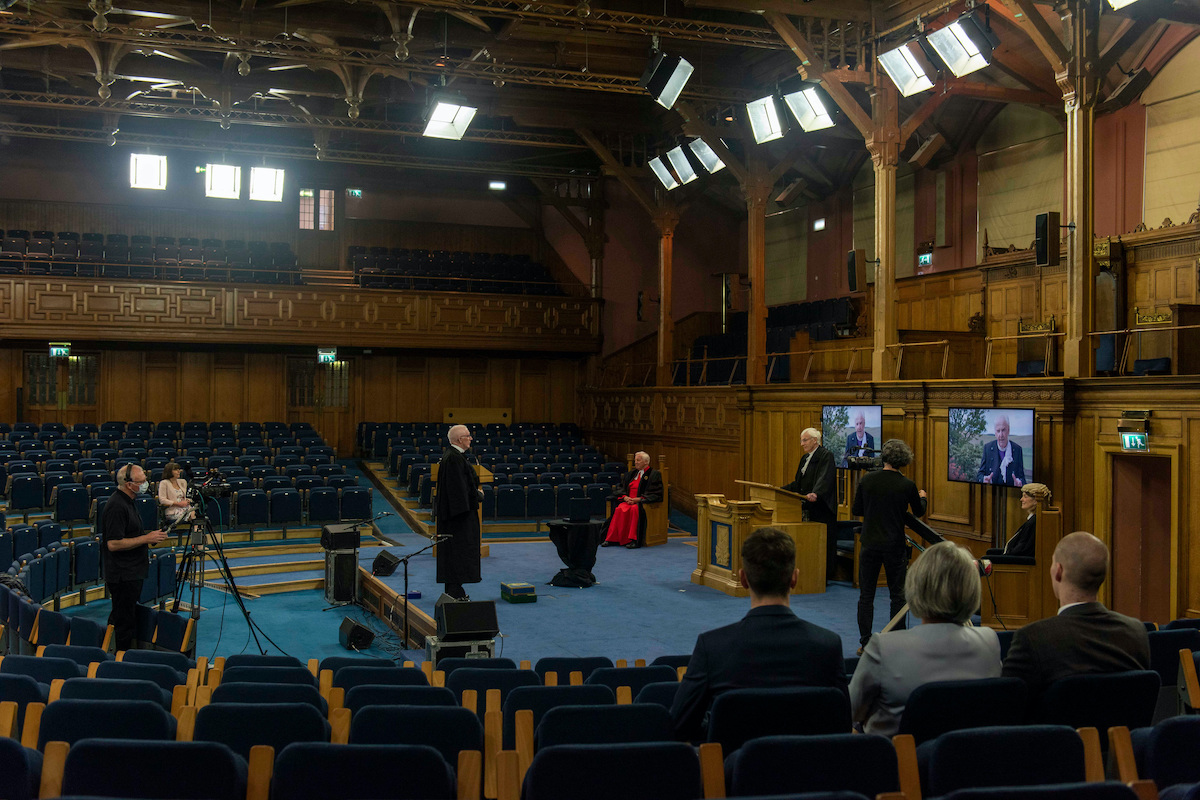 Rt Rev Dr Martin Fair, a minister from Tayside, was officially installed as the new Moderator of the General Assembly of the Church of Scotland.

He will represent the Kirk at home and abroad for the next 12 months, and described the role as an “enormous honour”.

A special ceremony was held at the General Assembly Hall in Edinburgh this morning and streamed live online to enable people across Scotland and beyond to share in the occasion. You can watch the whole service here on the Church of Scotland Facebook page.

Today the annual gathering should have opened in Edinburgh, but it was cancelled for the first time in 330 years due to the Covid-19 pandemic.

Dr Fair, 56, will continue to serve as the minister of St Andrew’s Parish Church in Arbroath and undertake Moderatorial duties when required until further notice.

He said: “I’m not sure I’ve ever felt a greater weight of responsibility but neither have I ever felt more supported, practically and by the prayers of God’s people.”

Dr Fair succeeded Very Rev Colin Sinclair and was inaugurated before a small group of people including his wife, Elaine.

The minister, who grew up in Thornliebank on the southside of Glasgow, said he recognised that many people were suffering due to the pandemic and every life lost speaks of struggle and tragedy.

“Let me assure the nation that the Church of Scotland, with our partner churches, will continue to pray for and support those who are most acutely affected,” he added.

“And the same commitment I make to those who, 75 years after VE Day, find themselves on this new frontline – we value you deeply.”

The service was opened by Mr Sinclair and included  hymns, prayers, readings, a Benediction and followed strict social distancing guidelines to prevent the potential spread of Covid-19.

It was broadcast live on the Church of Scotland website and Facebook page and included a video message from the First Minister of Scotland, Nicola Sturgeon MSP and former Moderator, Very Rev Jimmy Simpson.

Ms Sturgeon said: “I want to sincerely thank Very Rev Colin Sinclair for his work over the past year and particularly the last few difficult months caused by the restrictions in place due to the coronavirus pandemic.

“His continued efforts to support the community, even as we stay apart, are hugely appreciated.

“I also want to send my very best wishes to the Right Rev Dr Martin Fair on his appointment as Moderator.

“At this challenging time, the Church continues to provide support and guidance to people across our country – through virtual services, pastoral duties, and charitable work in our communities.

“I’m hugely grateful to everyone involved and I look forward to working with the new Moderator, in tackling the challenges, and also seizing the opportunities, that lie ahead.”

Dr Fair received a letter expressing best wishes from the Duke of Cambridge, known as the Earl of Strathearn in Scotland, who was meant to be Lord High Commissioner at the General Assembly, his grandmother’s representative.

Dr Fair, who has served St Andrew’s Parish Church since 1992 and will wear the Moderator’s ring and chain of office during official duties, said the pandemic had forced the Kirk to re-evaluate because church buildings were closed and ministers across the country were spreading the Gospel message online.

“We find ourselves in uncharted territory, having to re-imagine church,” he added.

“We may not have a blueprint but this calling has always been about a willingness to venture beyond the familiar and comfortable.

“Jesus didn’t give much away when he called those four fishermen.

“He called them and sent them with no terms and conditions, no detailed plan, radical or otherwise.

“And from love flows peace.

“‘The storms of life may come and go but the peace of God you will know.’”

Dr Fair said circumstances change but he was called to serve the “same as always God”.

The video introducing the service, which will be available to watch on the Church’s YouTube channel, was narrated by Susan Pym, Vice-Convener of the Assembly Business Committee, and the British Sign Language interpreter was Rev Rosie Addis.

Dr Fair is the first Moderator from Arbroath and is serving during the 700th anniversary year of the Declaration of Arbroath.

A special celebration of the life of the Church of Scotland in all its richness and fullness is being streamed online tomorrow, Sunday.

The digital version of Heart and Soul, which will run for just over two hours from 2pm via the Church website and Facebook page, features an eclectic mix of worship, music, stories and good conversation with a host of guests.