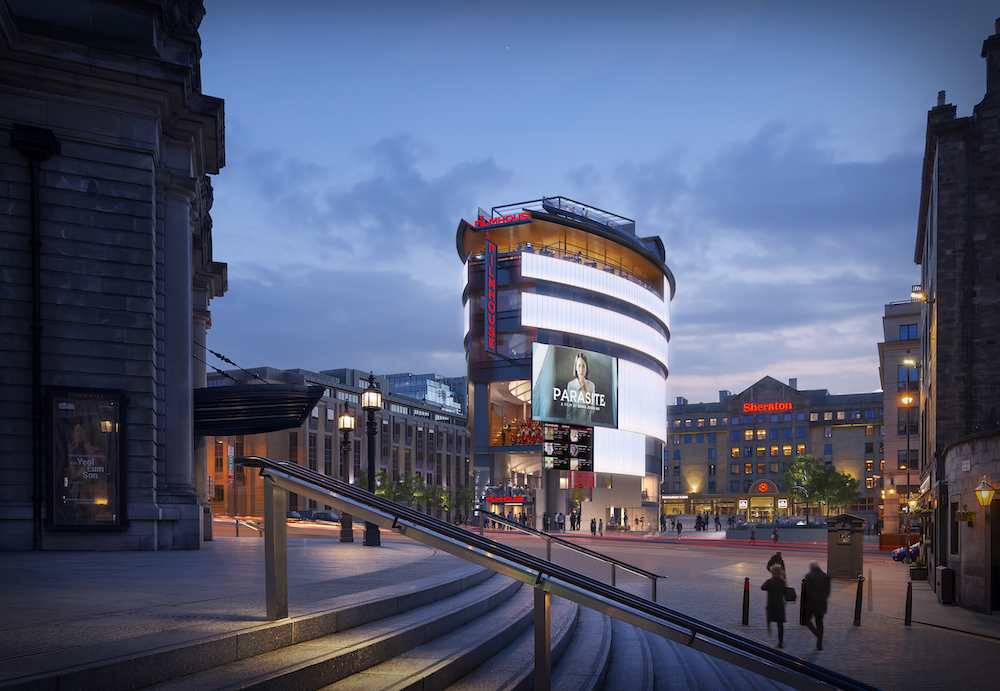 For almost three decades there has been talk about the possibility of a new home for Edinburgh Filmhouse. Now, the possibility will take a step nearer reality when the planning process begins.

From today anyone can have their say about the proposal to put up an eye shaped building in Festival Square on Lothian Road. From the artist’s impressions, the building will take up the full footprint of the square with landscaped areas outside it. The glass structure will rise up perhaps two storeys above the Sheraton Grand with three levels below ground.

The number of cinemas will increase from three to six and seating capacity will be doubled from 450 to 900. All cinemas will be on level minus three, and one will have fully retractable seating to make it as flexible an area as possible.

On the rooftop space, events will be held under cover or out in the fresh air, depending on the weather, and there will be a restaurant on the level below that, all with views to Edinburgh Castle.

This is an ambitious project which hopes to tick many boxes at once.

The first difficulty to overcome with the Filmhouse as it stands is that it was built as a Georgian church. There are problems with accessibility and modernisation, as well as leaks from the uneven roofs above.

Ken Hay, CEO of Centre for the Moving Image (inc Filmhouse and Edinburgh International Film Festival) said: “There are major challenges with the existing building, but audiences love it and they love the café and its great food. Simple things like access into the building, getting through the building and into and out of the cinemas is a huge constraint. The seats were put in at a time when cinema seats were the size they are in Cinema 1, but that is 35 years ago. Cinema seats now are much more spacious, and if we tried to provide that now we would reduce capacity by about 30%.

“The building is not able to do what we need it to for ourselves or for our customers. As we looked at what we need for a new space, we’ve asked our customers what they are looking for. We have also spoken to our programme partners and they have fed in all the different elements they would want to be fed into a new building.

“So we have gone through a long shopping list and have worked out how to deliver that. The Edinburgh International Film Festival has been running for 73 years and has had its base in Filmhouse since 1978, but a lot of what the EIFF does has to be delivered in other spaces because we don’t have the requisite facilities here.”

The proposal is that there will be a new £50 million building in Festival Square. Filmhouse have looked at a number of different sites over the years, but a key piece of feedback from their audiences was not to move from Lothian Road.

Listen to our chat with Ken Hay here.

The shape of the proposed building has been devised by Richard Murphy Architects as an eye, clearly a nod to film and the visual arts. There will be a spacious entrance and lots of glass above ground to show off what is going on inside the building which will be a space for the 21st century.

The new Filmhouse will use the full footprint of the council-owned land in the square which is surrounded by two office blocks and the back wall of the Sheraton Grand. It will be a carbon neutral building, fully accessible to both customers and staff. There will be educational learning spaces as well as loads of toilets – another important request from customers.

There will be outdoor landscaping and Hay hopes this will become a new lively, exciting public space. The argument is that the square has been a dead space ever since it was created 35 years ago. Different attempts have been made to animate it but these, Hay says, have been short-lived and unsuccessful. Anyone remember the BBC Big Screen?

The new space could have plug and play opportunities for street performers, and on one level up from the ground floor there will be a new Festival Centre to provide a venue for EIFF and other year-round events. Several food and drink spaces will be served from two kitchens in the basement by way of four dumb waiters and a service lift in the middle of the building. Two passenger lifts as well as stairs will take you to the roof.

All of this is a long way off. It may take as long as five years to get planning permission, raise the funding and then undertake the build. But today is an important step towards that.

Now is the chance for you to have your say. Should the council allow a new building on this square?

We asked the council for any financial details but there are none agreed as yet. The first step for Filmhouse is to get planning permission and then it will be a matter for the council of the day to either sell or rent the land for such a development.

We understand that there have been positive discussions so far between Filmhouse and the council on which any future arrangement will be based.

There would be capital which could be released from the sale of the existing Filmhouse. No matter how unsuitable it has become as a cinema, it would be a prime development opportunity. Whether or not that capital flows into the council’s coffers depends on future agreement, once planning permission for any new building is in place.

Due to the significance of this project to Filmhouse and to Edinburgh, the project team are consulting as widely as possible on this proposal.

The consultation stage will officially run for 12 weeks from today 11 March to 3rd June 2020.

Filmhouse wants to engage with customers, partners, stakeholders including programming partners, creative learning partners and the Scottish film sector, community councils and councillors, and residents of Edinburgh to gauge support for the plans and further develop the designs before submitting a formal planning application to The City of Edinburgh Council during the summer.

Information on the proposed development including architect drawings and visualisations, the background to the development and FAQs will be available on the Filmhouse’s website.

There will also be information and images on display at the Filmhouse including a scale model. People will be able to give feedback through a simple online survey through the Filmhouse and EIFF websites, through comment cards in the Filmhouse, and formally and informally at events, meetings and discussions with Filmhouse staff.

Three all-day (10am – 7pm) public consultation events will take place in Filmhouse on Sunday 29 March, Wednesday 1 April and Tuesday 28 April where members of the Filmhouse team, Richard Murphy Architects and Montagu Evans will be present to answer questions and collect feedback.

There will be two Filmhouse Members’ Events for its more than 5,500 members on Sunday 29 March and Monday 6 April with opportunities for this key group of stakeholders to hear more and ask questions.

An annual Programme Partners’ event in March gives the Filmhouse’s festival and cultural partners an opportunity to focus on this consultation and how they can engage with the proposed development.