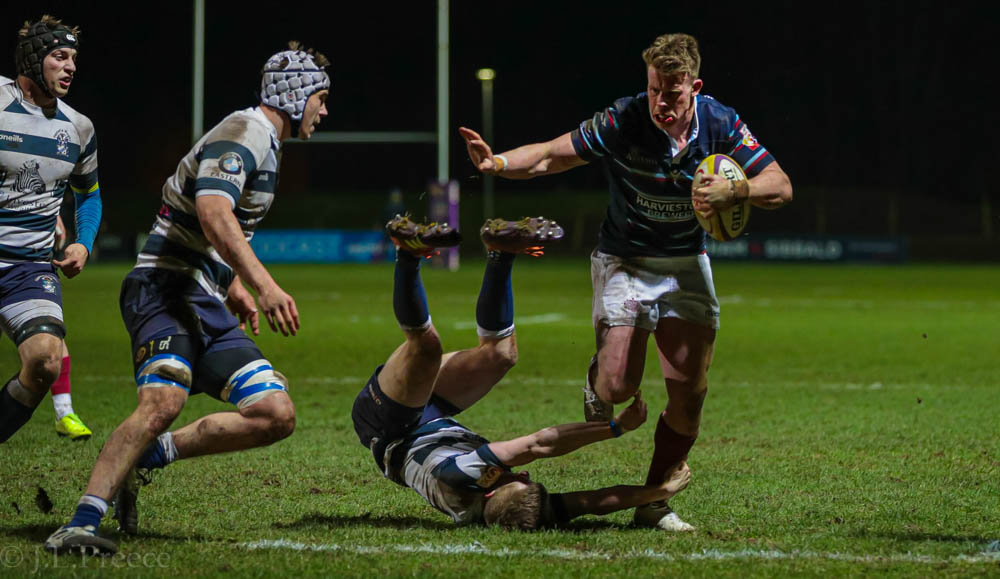 Heriots Rugby made the trip up to Myreside on Friday night for a FOSROC Super6 top-of-the-table local derby against Watsonians. With the teams lying second and first, respectively – seperated only by match points difference – it was, effectively, winner takes all. At least, for this week…

The stiff breeze may have been the cause of the home side failing to find the line from the, ‘traditional’, kick off return, but fail they did. Heriots collected and returned from around half way, recycling quickly and keeping the ball moving.

Then, just two minutes in, an offload from Heriots’ 7, Jack McLean put Edinburgh Rugby’s, Chris Dean – on the return from injury – into a gap and the centre powered through and over the line for the opening try and 0-5. Full back, Ross Jones then converted for 0-7.

Following the restart, the home side made ground once they had the ball back, but were gradually pushed back and eventally turned over and the ball cleared.

They returned to the attack with a combination of passing and running, making some territorial gains and then an offload over the top of his tacklers from flanker, Michael Badenhorst, put their 4, Brian Leitch through just over half way.

He carried well into the 22 before releasing an inside pass, which, unfortunately, failed to find friendly hands and the visitors sorted themselves out and cleared again.

Once again, off their lineout, Watsonians pressurised the Heriots’ defence and drove deep into their 22, winning a penalty in front of the posts. Stand off, Lee Miller, then had the relatively simple task of slotting home the kick for 3-7 after 11 minutes.

Two minutes later, Heriots extended their lead with their second try. Winning the restart-return line out, they move the ball quickly through the hands to Jones. He then drew in the defence leaving space down the outside for wing, James Couper. He stepped inside his opposite number and sprinted in for try number two. Jones then converted for 3-14 after 14 minutes.

At this point, Heriots were looking the dominant side as, despite Watsonians’ period of, dangerous looking, attacking play, they had only shipped three points and had, fairly easily, scored their second try.

Their domination of play continued for the next 15 minutes, or so, with Couper almost netting his second try early on and general play being, very much, confined to Watsonians territory.

The breakthrough came in the 28th minute from a rolling maul. Setting up from their lineout win near the five metre line, they drove the opposing pack back to the line. At this point, the maul was pulled down, leaving referee, Mike Adamson, no option but to award a penalty try to Heriots, and a yellow card to Watsonians’ Morgan Innes.

So, with just over 10 minutes until the break, it was 3-21 to the visitors, who were now looking even better for the win than they had earlier.

However, with half time approaching, the home side got their act together and exerted pressure on the away 22. Keeping the ball moving through a combination of their forwards and backs, centre Lewis Berg, received the ball just inside the 22 and fired through a gap in the line, crashing through scrum half, Andrew Simmers, on the way.

Just as he crossed the five metre line, the defence arrived, but his momentum carried him on and he grounded the ball for ‘Sonians’ first try and 8-21. Miller then converted for 10-21 and that remained the score until the half time siren.

The second half stared with a bang for the home side. They quickly had the opposition on the retreat and were pushing up into their 22.

Setting up a rolling maul from a close-in lineout, the home side drove forward, but, in a mirror image of earlier, they were pulled down while advancing and the referee went down the penalty try/yellow card route again – Heriot’s Jack McLean being ‘awarded’ 10 minutes rest – and the score was now a healthier looking, for Watsonians, 17-22 after 46 minutes.

This point then seemed to open up the floodgates of open, running play. However, despite Heriots’ best efforts, most of the open-ness and running was directed at their defence and on 65 minutes, Watsonians manufactured an overlap down the right wing.

With ball in hand, full back, James Forbes, attacked the line and ignoring his outside player, cut back inside and dived over for the try. Miller then converted for 24-21.

This was the turning point of the match as the visitors desperately tried to regain the upper hand, but the home side kept them well contained, mostly in their own half.

Watsonians then encamped on the Heriots’ try line for a time, but failed to cross as a superlative defence from the visitors kept them at bay and managing ‘held up’ from dangerous looking rolling mauls three times in as many minutes.

However, it was Watsonians’ match and, despite a rally from the opposition late on, their line was never threatened and they ran out 24-21 winners, maintaining their top spot in the FOSROC Super6 table and securing a home play-off in their quest for the title.