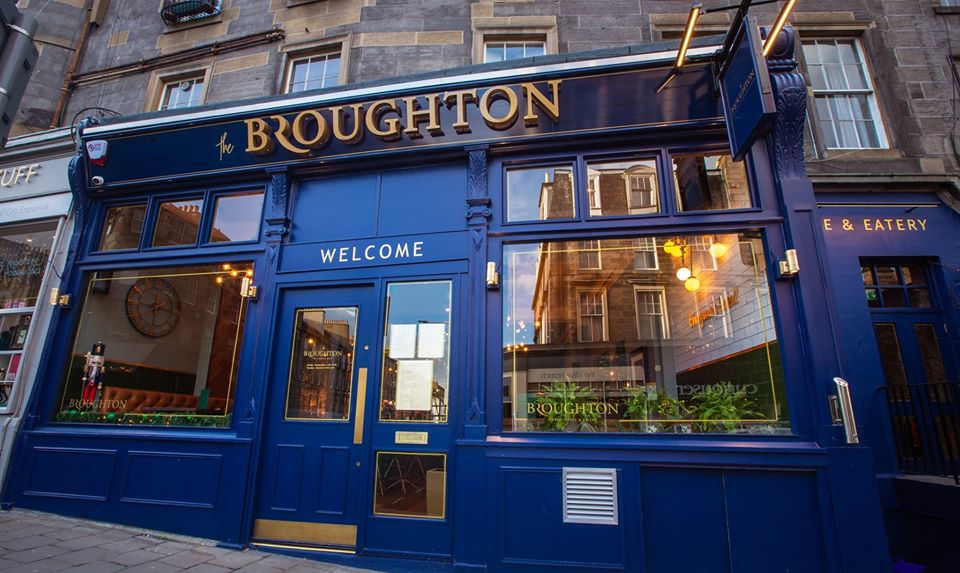 When the Phoenix on Broughton Street closed its doors for the final time the locals were incandescent: “What a tragedy!” they cried. “An injustice!” they wailed.

If everyone who lamented the closure of The Phoenix had actually patronised the establishment the owners would have been doing cartwheels down Broughton Street having just booked their third holiday of the year to the Bahamas. Yet ‘The Phoenix’ would be a good metaphor for my conversation today, as the woman in question rose from the ashes many, many times…

My dining companion was Kevin Geddes, author of Keep Calm And Fanny
On, a detailed and entertaining biography of the legendary chef,
author and all round mistress of reinvention, Fanny Cradock: “Before
Madonna had even thought of it,” Kevin wryly remarks. Having had a
prolific and varied career, Fanny was also something of a survivor and
a lunch theme of bringing the fancy to the drab felt very apt.

I wanted to detest a traditional boozer had ‘transed’ to a restaurant
and bar, so I was willing to hate the ex Phoenix, now The Broughton.
Yet upon entering the comfortably designed space I had to weep a
silent tear: it’s rotten being wrong. The restaurant area is
delightfully cosy, something lacking in one of the coldest parts of
the country, and the service from the outset was incredibly friendly.
As the owner is also the proprietor of The West Room and the Seafood
Restaurant in St Andrews this shouldn’t have taken me aback.

Edinburgh Fanny-fan Kevin Geddes has spent many hours recreating Fanny
Cradock’s most legendary and bonkers dishes on his blog
keepcalmandfannyon.blogspot.com and has now brought out a rollicking
biography of the most flamboyant of TV chefs. Having studied Fanny’s
work and culinary legacy for his Queen Margaret University Gastronomy
Master’s dissertation, Kevin takes us through Fanny’s mysterious early
life through to her prolific career as an author of both adult and
children’s novels to her break in television and enduring career.

Kevin was having an amusing time blogging, cooking and writing
articles, yet when he embarked on his course at QMU he realised, “A
lot of what we were learning was about food history and how that was
communicated. Before I was just interested in Fanny for fun but then
thought she was more significant in food, legacy and television.”

As every biographer knows an archive is an essential contribution and
Kevin found it in, of all places, Auchtermuchty. “It was just sitting
around, and the owner Chris Duffy from the Auchtermuchty Food Museum
wanted someone to use it. Friends had her bits and pieces in it, both
professional and personal, and he bought it after nobody wanted it at
auction. if I’d been around I would’ve snapped it up! It brought her
story to life.”

Kevin tells me his first interest in cooking was sparked with recipes
from the Be-Ro cookbook, baking with his mother, granny and auntie.
Fascinated by how a new ingredient could be turned into something
magnificent it felt monumental at the time. His subsequent interest in
Fanny Cradock began by recreating her recipes.

“I was aware of her growing up but more on chat and game shows, yet
after she died it became fashionable to talk her down as a bully who
couldn’t cook and bluffed her way through life. But it didn’t match
that she’d cooked on TV for over 20 years, so I found her books in
charity shops and thought I’d see for myself.”

As you’ll see from Kevin’s blog it was fun recreating some of her colourful food: “Her
stuff works. It looked unusual for for the time: in the 1950s food
wasn’t colourful but she wanted to do something different.”

Sitting in The Broughton, we’re enjoying a relaxed atmosphere. The
restaurant area has a slightly Mediterranean feel, partly due to an
‘olive tree’. Fake I presume, but effective none the less. Fanny may
have approved. One of the many interesting passages in Kevin’s book is
the travel articles Fanny and Johnnie wrote before their screen fame.

“They embraced the whole spirit of their destination and it was
aspirational for the time, and still reads like modern travel
articles, all about what you can expect but mainly about what you
could eat and what you could bring back home, they were interested in
the whole story. Those were hard times in the UK but she offered
escapism.”

Nice work if you can get it. “She certainly was a smart business woman,” Kevin laughs, “If someone was going to pay you to travel she was going to grab that opportunity.”

To begin Kevin chose the Roquefort Fritter, Pickled and Candied
Walnuts and Pear, which he deemed ‘most tasty’, while I opted for the
Duck Liver Pate, Fig, Hazelnut and Toasted Sourdough. It was sublime
with both fresh and confit fig, and a lovely tart dressing to offset
the smooth creaminess of the pate.

So far our meal seems more flamboyantly Fanny than the ‘chuck it in’
genre of modern TV cooking, yet Fanny never actually aspired to be on
television until it was suggested to her: “She created opportunities
but if someone dropped her one she ran with it.” Surprisingly Fanny
was more focussed on radio and cooking for housewives, but a chance
meeting with a producer, who thought she might work better on tv,
ended up giving her national fame: “She embraced it and learned a new
craft. It was the same with cookbooks, she was big on getting feedback
and learning and improving; making the best job of it.”

Indeed Fanny was good at taking direction, practising for hours
cracking an egg with one hand and mixing a dish with the other so it
looked like it was the most natural thing in the world to do. “Shows
had to be quick and cheap so she came along fully formed but yet she’s
not the sort of character you’d imagine that from.”

For main course Kevin told me his Salt Baked Carrot, Quinoa, Smoked Ricotta
and Hazelnut Spice was perfectly cooked and full of flavour. Being a
vegetarian he says he finds choosing dishes slightly less hassle. What
a chap! My decision was harder as there were so many choices, all
sounding sublime. In the end I opted for the Natural Smoked Haddock,
Olive Oil Crushed Potato, Poached Hens Egg and Grain Mustard. There’s
never a bit of smoked fish a poached egg can’t put a crown on and this
one was of the best quality and unctuous.

From talking to Kevin and reading his book, one striking aspect of
Fanny’s life was the vast amount of work she produced. “That was her
personality,” Kevin tells me, “And according to close friends I
interviewed she never stopped working. She had a difficult upbringing:
parents in precarious jobs, father a playwright, mother an actress.
People are less aware of her career as children’s writer and author.”

Fanny had some fortune with her Castle Rising series of novels,
basically Downton Abbey before that might have been thought about.
“They were some of the most borrowed books from the library at the
time and the first four make good reading but it does descend into the
Barbara Castle from Little Britain territory after that, but there’s
no doubt they were a success.”

Romeo and Juliet, Tristan and Isolde, Andrew and Fergie, amazing
couples, all of them. Yet none can hold a lit blowtorch to the love
story of Fanny and Johnnie.

“They were an amazing couple but there was a public and private side.
Working colleagues would say they spent a lot of time bickering and
fighting but people who knew them behind the scenes thought it was
more the other way. Johnny left his wife and four children to be with
Fanny and there were some colourful episodes, particularly 40 years of
pretending to be married, but they were very committed to one another.
In fact her letters in the archive to Johnnie were quite tender.”

Of course there are sad parts of Fanny’s story. Burning bridges as
much as brûlées seemed top be her forte, particularly with her two
sons, born from different fathers before Johnny came on the scene.
Reunited with them in their adulthood she cast them out after
discovering their relationships with lovely young women who,
ironically, she was a good friend and mentor to. Surprisingly Kevin
believes Fanny was happiest helping people.

“Whether it was campaigning for housewives to have better rations
after the war, to mentoring young cooks, she was kind behind the
scenes.”

The anecdotes in Kevin’s book are often jaw dropping: double bigamy,
some light insurance fraud, theatrical food poisoning and an alleged
flirtation with David Attenborough; there was rarely a dull moment in
Fannyworld.

Dessert was Pineapple Pavlova, Passion Fruit, Mint and Rum Syrup. It
looked and tasted a triumph. “Fanny would have loved this!” Kevin
declared. As did I. Light, with the perfect level of rich sweetness
and zing, it was perfect.

Whilst Fanny could be self destructive (particularly in relation to
her two sons) and downright rude (to just about everyone else), Kevin
tells her story with honesty, generosity and affection. This would be
a great read for retro food geeks or anyone who loves a great yarn.

Whilst sipping our coffees on the darn comfy seats of The Broughton,
Kevin tells me he’s soon to be off to The Black Isle with his partner.
“Open log fires!”

Kevin plans to continue with his management consultancy, where he
works with charities and third sector organisations, further develop
his writing and complete a part time PHD at Napier University, where
he will study the impact of retro television cooking; Keith Floyd
being a particular favourite: “Hopefully broadcasters will realise
these shows are appealing to a younger audience. They’re so
interesting.”

What a delicious and scandalously tasty lunch and chat we had. I’ll
definitely return to The Broughton, possibly for more conversations
about Fanny Craddock, although there wasn’t a doughnut in sight.
Sadly, despite many of Fanny’s TV archives being deleted (as the BBC
was won’t to do in those days), it’s alleged Johnnie never actually
said those flamboyantly iconic words. Devastating! However, Kevin
tells me that Fanny was well known for her crackless swiss roll
recipe. One must take one’s innuendoes where one finds them.

Keep Calm And Fanny On and Kevin’s other book, Its All In The Booklet,
Festive Fun With Fanny Craddock are both available at
fantompublishing.co.uk