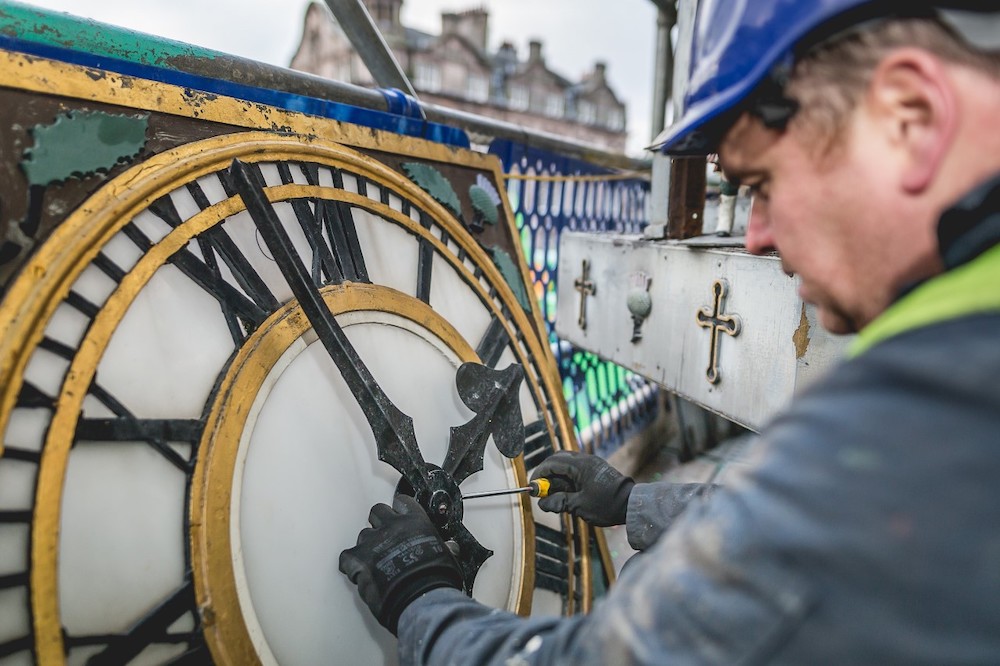 Soon the most famous clock in Edinburgh will be working again after some years of disrepair.

This is one of the most important parts of the Diageo makeover of the West End building formerly known as Binns and latterly as Frasers. The clock was the most popular meeting point for young romantics in the days before mobile phones made last minute changes to arrangements possible.

The clock features hand painted highland figures which march out of the clock to strike the hour and half hour. The mechanical procession of pipers will be brought back to life again.

Work is now underway to create the Johnnie Walker Princes Street visitor experience in the building which will be the latest attraction in the city centre.

The Cumbria Clock Company has dismantled the cantilever clock and taken it to its workshop to restore it.

Ewan Andrew, Diageo President of Global Supply and Procurement, said: “We are really excited to be working with the skilled craftspeople from Cumbria Clock Company to carefully restore the clock and bring it back into use. It is such an important part of the cityscape and is so fondly regarded by Edinburgh locals that it will be great to reinstate it as it used to be.

“With the restoration we want the Johnnie Walker Princes Street clock to once more become an iconic meeting place for the people of Edinburgh.”

Mark Crangel, the clockmaker from Cumbria Clock Company who is overseeing the restoration, said: “We repair, maintain and conserve public clocks all over the world, from the largest clocks in the UK to local church clocks – but every clock has its own story.

“It’s great to be working on this clock because it is such a well-known landmark in Edinburgh. It’s not worked for a while now and with a lot of moving parts, so it will be a demanding job but it will be incredibly satisfying to see the clock working again as it did when it was first installed 60 years ago.”

Whisky from Diageo’s distilleries all over Scotland contribute to Johnnie Walker, but four distilleries – Glenkinchie, Cardhu, Caol Ila and Clynelish – will be linked directly to the Johnnie Walker venue in Edinburgh, representing the ‘four corners of Scotland’ and the regional flavour variations crucial to the art of whisky-making.  Together these sites will create a unique Johnnie Walker tour of Scotland, encouraging visitors to the capital city to also travel to the country’s extraordinary rural communities.