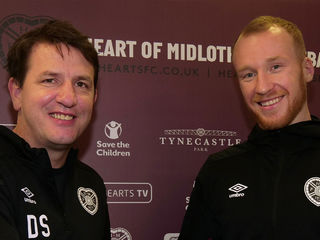 Hearts have confirmed the signing of striker Liam Boyce and defender Toby Sibbick as manager Daniel Stendel looks to shape his team for their fight against relegation.

Northern Ireland internationalist Boyce is well known to Hearts fans having spent some time at Ross County where he helped the Dingwall club win the League Cup in 2016 and become the Premiership’s top scorer with 23 goals.

He moved to English football and Burton Albion and has been a regular scorer in the first team with 14 goals this season for the League One side. Boyce, whose contract was due to expire this summer, had other offers, including one thought to be from Aberdeen, but the 28-year-old has opted for Tynecastle and is a major boost to Hearts bid to beat the drop.

Boyce said he was ‘buzzing’ to be in Gorgie. He told BBC Sport Scotland:

“This is an absolutely massive club, There’s potential here and having met the manager I’ve got a good idea of what he’s like. Hopefully we can build something special here.

“This is a move that could have happened a couple of times before, but I obviously ended up in England.

“When the opportunity presented itself again I couldn’t see myself going anywhere else and I’m buzzing to be here.”

Also arriving in Gorgie is defender Toby Sibbick who has signed a loan deal from English Championship side Barnsley. He has been a regular in the Barnsley team this season and is well known to former Barnsley manager Stendel.

Both players are in line to make their Hearts debuts against Rangers in the Ladbrokes Premiership at Tynecastle on Sunday.