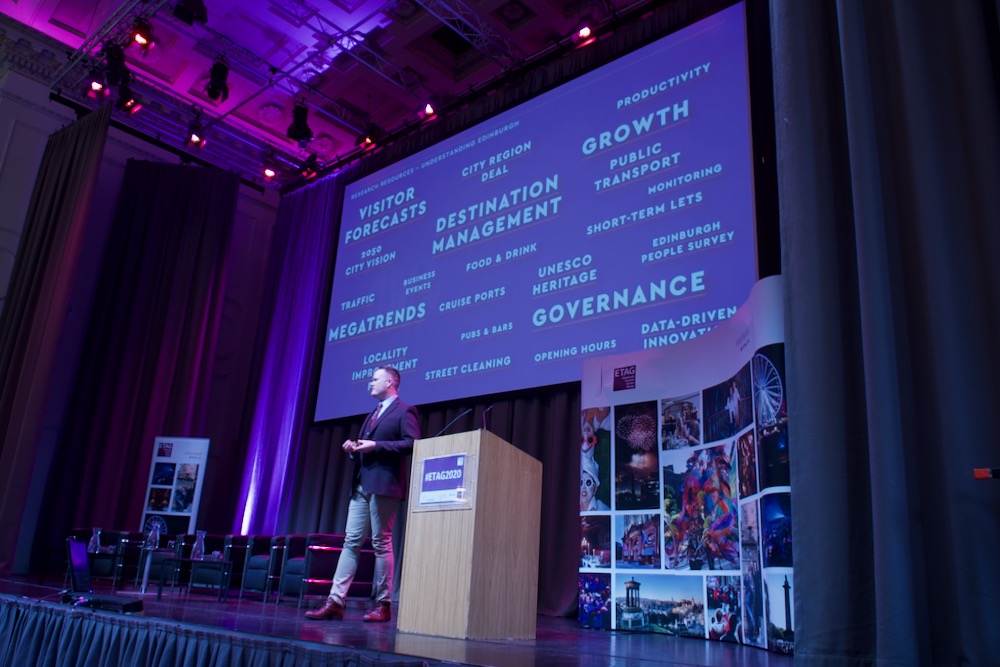 There was quite a lot of back slapping and claims about Edinburgh’s success as a tourist city at today’s Edinburgh Tourism Action Group’s conference. You would expect that – these are the people who run tourism related businesses from hotels to bars – and castles too, all gathered at Assembly Rooms for the afternoon.

But we would be doing the 200 or so people who attended the gathering a disservice if we stopped there. They were all there to talk about Edinburgh of course, but were prepared to learn as well from other cities which have both suffered and benefitted from tourism. They heard about schemes in both Barcelona and Amsterdam which have worked to involve residents in the story.

It is telling that the delegates had created their own word cloud ahead of the event by choosing the biggest opportunities for Edinburgh’s as tourism, technology, China and partnership. It is clear that all of these are at the forefront of many minds of tourism professionals.

Robin Worsnop is the outgoing Chair of Edinburgh Tourism Action Group (ETAG), giving way to new boss Donald Emslie. He cast a backward glance over the decade just ended during which an additional 10,000 jobs were created in tourism. He said that tourism has played an important role here in Edinburgh, and that he was proud of the small part he has played in its success. He also said that international visitors put Edinburgh on the international map, and help support all parts of the local economy too.

Mr Worsnop runs Rabbie’s the bus tour company which uses small 16 seater buses both in the capital and all over Scotland. He explained that the company have always worked to promote sustainability and the environment.

And it is the climate crisis and the effect of tourism on the city and its people which was referred to again in a later speech by the Council Leader, Adam McVey.

Mr Worsnop concluded : “Our story is one of incredible growth which we should be proud of.” He also said that his thoughts are with the people of Wuhan in the wake of a Coronavirus outbreak.

Toposophy had partnered with ETAG to frame the city’s 2030 tourism strategy which was recently approved by the City of Edinburgh Council and Peter Jordan from the company addressed delegates. The council claims the new strategy will put people at the heart of decisions made about tourism in the capital.

Mr Jordan said that they had looked no further than the city’s own economy strategy to pick out the key aims for the new strategy.

He said : “The city’s goals are our goals. The economy strategy includes achieving low carbon, acquiring skills to meet future needs, to be the data capital for Europe and to be the most entrepreneurial city.

He suggested that residents and visitors alike should be encouraged to respect and care for the city but also recognised that tourism can impinge negatively on people’s lives.

He said : “We must get creative and work together on dealing with those. We will nurture and develop our environment, take a wide ranging approach to reduce its environmental impact and encourage visitors to enjoy Edinburgh’s outstanding natural geography.

Mr Jordan said it is everybody’s responsibility to do this, and one of the best ways forward is by forming partnerships with nearby neighbours, although he admitted that spending is highly concentrated in Edinburgh.

But Mr Jordan said that the city’s reputation should be both defined and defended. He said : “The eyes of the world are on Edinburgh – what is it like to be a resident or a visitor? ETAG has to get out with a positive message and a commitment to quality. It must also challenge what I call ‘misperceptions’.”

So Edinburgh has the opportunity to work with neighbours and with other cities globally to learn lessons from them. Mr Jordan said this is a chance to ‘Be Bold’. He said : “This is an opportunity to lead – no other place in the UK has a strategy that looks like this. Edinburgh’s tourism sector has a role to play in making the city realise that it can be better for places.”

Council Leader Adam McVey began his slot by highlighting the 2030 Tourism Strategy which he said is an acknowledgement of Edinburgh’s success. He also said that Edinburgh is all about culture and arts, and reminded us that 7/10 Scottish attractions are right here in Edinburgh.

“No other city can boast such a rich tapestry.” He reminded the delegates that there is huge economic growth in the city – which at 15%+ or £2 billion per year, is twice the rate enjoyed in Glasgow. But despite that the Council Leader said that the city’s funding from Holyrood has only gone up by £42million which just pays for the salary increases to staff and not much more.

McVey said : “While we try our best to invest in local services the increase in our revenue budget is a discrepancy when you consider our economic growth.

“It is important to articulate the disconnect and close that loop.”

He said : “Everyone is welcome in Edinburgh and as a city we must continue to listen and talk in order to understand all views. We are a collective with genuine warmth. Let’s nurture that.”

He was speaking to the converted when he explained that this is where the biggest arts festival in the world takes place. He continued : “The world comes to Edinburgh and they are part of our identity.”

“We have to continue to invest in new venues like Leith Theatre and offer opportunities like the £15million PLACE programme.

He then admitted that there are some who think that our character is not being showcased all year round. He said : “It has caused ugliness to seep out, particularly on social media. I have been accused of being a working class boy from Paisley who would not understand the built heritage in Edinburgh – our senior council officers have been attacked for being English and Liz McAreavey of the Edinburgh Chamber of Commerce has been singled out for being Welsh.

“We have to look and listen to the concerns and to respond to them. I think it is doable and my challenge to you is this : ‘Keep speaking, keep your voice in the debate and get the truth half way round the world on social media rather than lies.’ The warmth of the welcome is most important.”

“We have spectacular landscapes and skylines. We are an enormous success story. One of the main drivers behind AirBnB is the authentic experience which would result from enjoying a stay as a local.

“It is easy to understand why short term lets have become explosive – apart from price. We have no problem in people letting out their spare room or letting out at festival time but when residential properties are bought in their tens of thousands and become Short Term Lets that is a problem. Edinburgh now has powers and the city plan will set out ways of controlling this.

“My expectation is that the city will ask for stringent regulations.”

McVey explained that the authenticity which attracts visitor to use Airbnb depends upon there being other people actually living in the stair. They could then welcome those visitors and make the experience a real local one, rather than the majority of a tenement stair being given over to AirBnB.

He said : “We are dealing with an enormous amount of success in Edinburgh – the best problem to have. I will not bemoan that as a problem, but we need to ensure that our economic success is felt by everyone.”

In relation to fair work, McVey explained that the city council had put more money into the social care budget last year to pay people more. This both increased the workforce and the retention of workers. He commends using what he called the Edinburgh Standard. “We must find ways of creating and sustaining opportunities and support people into those. We must make this the norm for everyone. In-work poverty is a reality and it is a collective responsibility of everyone in the city.”

He also explained that Brexit will create difficulties in finding the skills and the workforce which have become crucial to every sector of our economy, even though the government has reduced the financial requirements for immigration.

On the matter of the environment, as you might expect the Council Leader said that Edinburgh must lead from the front, and “in Edinburgh, tourism must align with our goal of being a net zero carbon city by 2030. It is only one part of the story. We have to work closely to find solutions to ensure that the goal is met.

“We have ten years to transform how we do business and look at how we produce goods and services.”

“Edinburgh is the front door for visitors to Scotland, and we can deal with the issues people are raising and build on our continued success.

Cllr McVey said : “I hope we still have to deal with growth and success in ten years’ time. This is one of the most vibrant and exciting cities in the world to live in.”