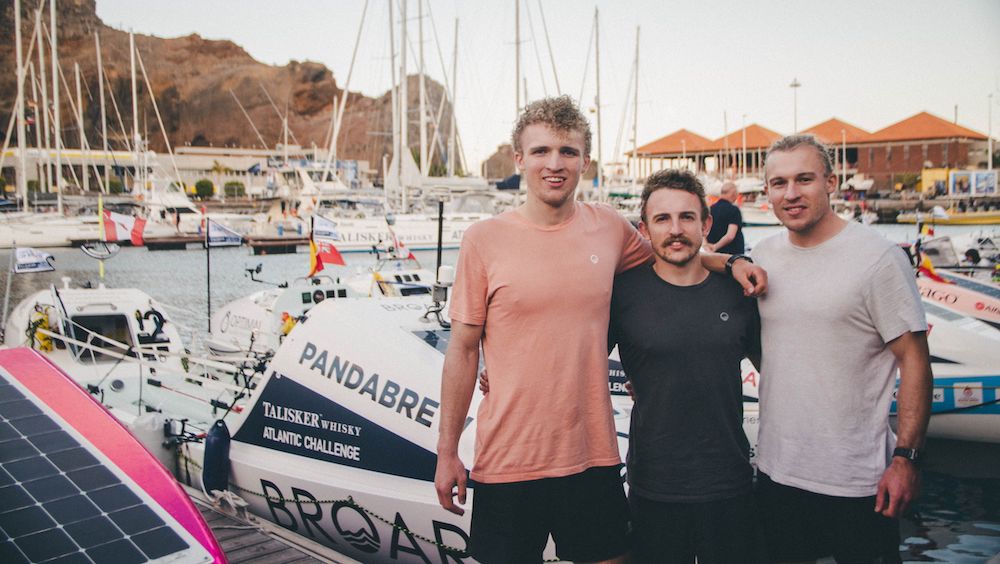 At lunchtime today the three MacLean brothers known as team Broar will begin the Talisker Whisky Atlantic Challenge to row for 40 to 60 days across the Atlantic.

They are bidding to become the fastest trio to row the Atlantic and will row more than 1.5 million strokes, consuming up to 12,000 calories each day to fuel up.

This is the world’s toughest row and one of the most demanding endurance events in the world. There will be 35 teams competing in the event beginning at La Gomera in the Canary Islands today heading for Nelson’s Dockyard English Harbour in Antigua and Barbuda.

Ewan, a 27-year-old design engineer based in Bristol has taken a three-month sabbatical from Dyson to take part in the row, while Glasgow School of Art architecture student Jamie (26) and University of Glasgow student Lachlan (21) will complete their studies upon their return.  The MacLeans, the first three brothers to row any ocean together, will spend Christmas and New Year on the boat, armed only with their instruments, a mouth organ, ukulele and bagpipes, for entertainment.

The seeds for this ambitious row were sown in Nedd, Wester Ross, where the boys spent much of their childhood and developed a love for the outdoors. That’s why the brothers have decided to take on this challenge to raise money for two children’s charities, Children 1st and Feedback Madagascar.

Youngest brother Lachlan said: “We realised if we didn’t do this now, we would never do it. It’s a once in a lifetime opportunity and I wouldn’t be able to do it without my two big brothers alongside me.

“We’ll go to some dark places, but we’ll learn so much about ourselves and each other.  We know it will be a challenge – most other crews have military or navy experience. We’re two students and an engineer whose rowing experience prior to signing up for this was in the gym. But I’ve always believed everyone is capable of amazing things and no matter how painful it is, it will be amazing to look back on when we’re old and grey.

“The main reason we’re doing this is to raise money for two charities which mean a lot to us, so hopefully everyone will dig deep.”

Their father Charles MacLean the whisky expert is creating a special limited edition blend MacLean’s pillage which will be auctioned by Royal Mile Whiskies in early 2020 to raise money for the Madagascar charity.