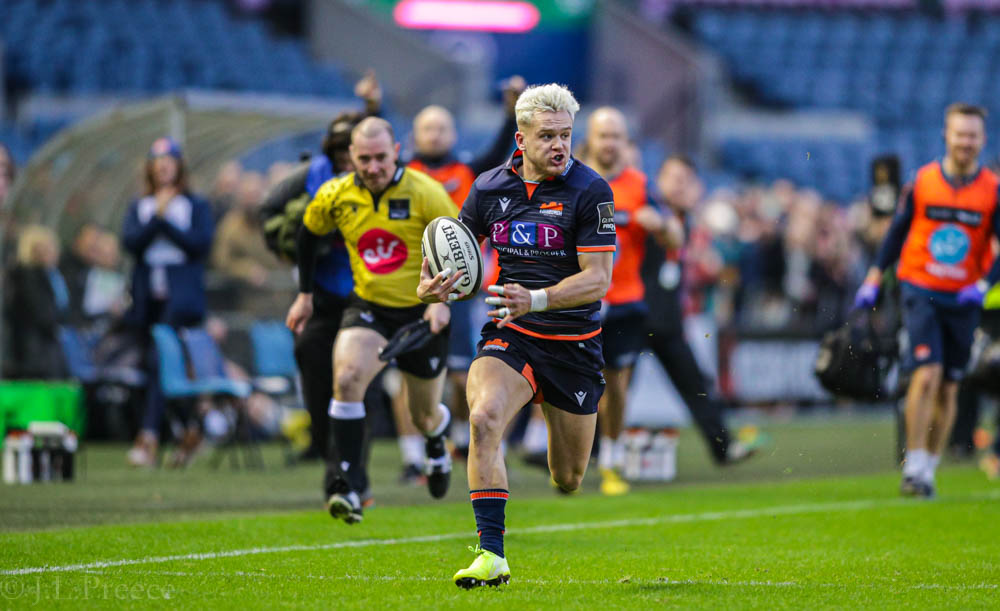 Edinburgh Rugby entered ‘Round 2’ of the 1872 Cup series, four points down on their derby-match opponents, Glasgow Warriors. With PRO14 points at stake, never mind Cup bragging rights, would the home side be able to claw back their deficit and leave the final outcome bubbling away until the decider in May?

The first five, or so, minutes of the game were very much end-to-end, with Edinburgh pushing the visitors back, the visitors clearing and play then returning to the visitors’ end.

However, having weathered the initial storm, Glasgow had first dibs at points through the boot of Adam Hastings with a sixth-minute shot at goal. He missed the kick with an uncharacteristically poor attempt, but the visitors had shown their teeth.

Glasgow then turned the match around for a period and put the hosts under increasing pressure in their own half. Edinburgh, for their part, managed to keep play outside their 22 with a strong, defensive performance.

A second Glasgow penalty, around the 12 minute mark, was kicked to touch but they could make nothing from the possession and Edinburgh cleared.

The first try of the match followed another Glasgow attack, but a collision between two of their players released the ball into the hands of Duhan van der Merwe and the big winger needed no further invitation to launch himself up field.

Crashing through a couple of tackles, he was eventually brought to ground, but the follow up play left the ball with Bill Mata and Edinburgh’s No. 8 then found Darcy Graham with an offload which left the wing with a clear run in for the opening try.

Simon Hickey then added the extras for 7-0 with as the match entered the second quarter.

Just over five minutes later, it was all-square.

Glasgow turned up the pressure from the restart and pressed the home side deep into their 22, keeping the ball moving and pulling the Edinburgh defence around the pitch.

This strategy eventually came to fruition when a 2-on-1 was opened up on the tight flank and Huw Jones, being one of the two, neatly side-stepped his way over the line to touch down under the posts. Hasting then slotted the kick home to draw the side level at 7-7 with just under 15 minutes left to the break.

The remainder of the half was fairly evenly matched with neither side able to make much in the way of progress, so 7-7 it was at half time.

The second half continued where the first had left off, but Edinburgh pulled ahead through a successful Hickey penalty on 48 minutes for 10-7.

Glasgow then came roaring back into the match with a well-worked push right up to the Edinburgh try line. A home-side penalty decision was overturned following a TMO consultation regarding a ‘no arms’ tackle and the visitors kicked to the line.

Once again, Glasgow pulled the Edinburgh defence from side to side, and, in the process, opened up enough of a hole for Scott Cummings to break through and crash over for the try. Hastings followed up with the conversion and the visitors were ahead 10-14 after 54 minutes.

With the match now in the balance, Edinburgh were looking on slightly shakey ground until, near the hour mark, Matt Scott made a break through the centre and looked to be in for a try.

He was dragged down a few metres out by three defenders, but his momentum kept the ball travelling forward and he appeared to have grounded against the foot of the post. More bodies then piled in and dragged player and ball over the line and, essentially, out of sight.

Another TMO decision was called for and, again, it went against Edinburgh, but as the ball was buried, there was no other decision that could be made. So… ‘Held up’ it was. ‘Scrum five’ the decision.

Having been on top all match – except when ‘done’ for early pushes – the home-side pack won the ball and Mata picked up from the base. He was stopped short, but Henry Pyrgos – on for Nic Groom – grabbed the ball and dived over for the try. Hickey then converted for 17-14 with just over 15 minutes left to play.

With 14 minutes left to play, Glasgow’s George Horne re-took the lead for the away side. Following in on a series of rucks from the pack, the scrum half mirrored Pyrgos’ try of a few minute previous, picking up from the rear of the ruck and going over in the corner. The kick was missed, but Glasgow were back in the lead at 17-19.

A couple of minutes later and it was back to the other end of the pitch. Kicking for the line from a penalty, Jaco van der Walt put the hosts right on the five-metre line for their line out.

Ball won, maul set up and moving, Glasgow then managed to contrive an illegal pull down right on the line which gave the referee no option, but to award a penalty try – and seven points – to Edinburgh and award a yellow card to Glasgow’s Jonny Gray.

With around 10 minutes left on the clock and the score at 24-19, Edinburgh were now looking to take advantage of the extra man and score a bonus-point try.

This they did with two minutes left to play.

Glasgow didn’t remotely lie down and they made it difficult for the hosts, but, as they were approaching the home 22, Nico Matawala lost possession, the ball was then gathered by van der Walt and whipped through the hands of, first, Mata, then Scott, to Mark Bennett.

The centre made metres through the defence, but, as he was closed down, Graham was lurking on his outside. A well-timed pass left Graham in the clear, just over half way, and he had ‘nothing else to do’ other than sprint the rest of the way into to corner for the fourth, and bonus-point, try.

The kick went awry, but it was 29-19 to Edinburgh to make it a six-point aggregate lead in the 1872 Cup, but, more crucially, five match points towards securing their place in the PRO14 play-offs at the end of the season. Job not even nearly done….