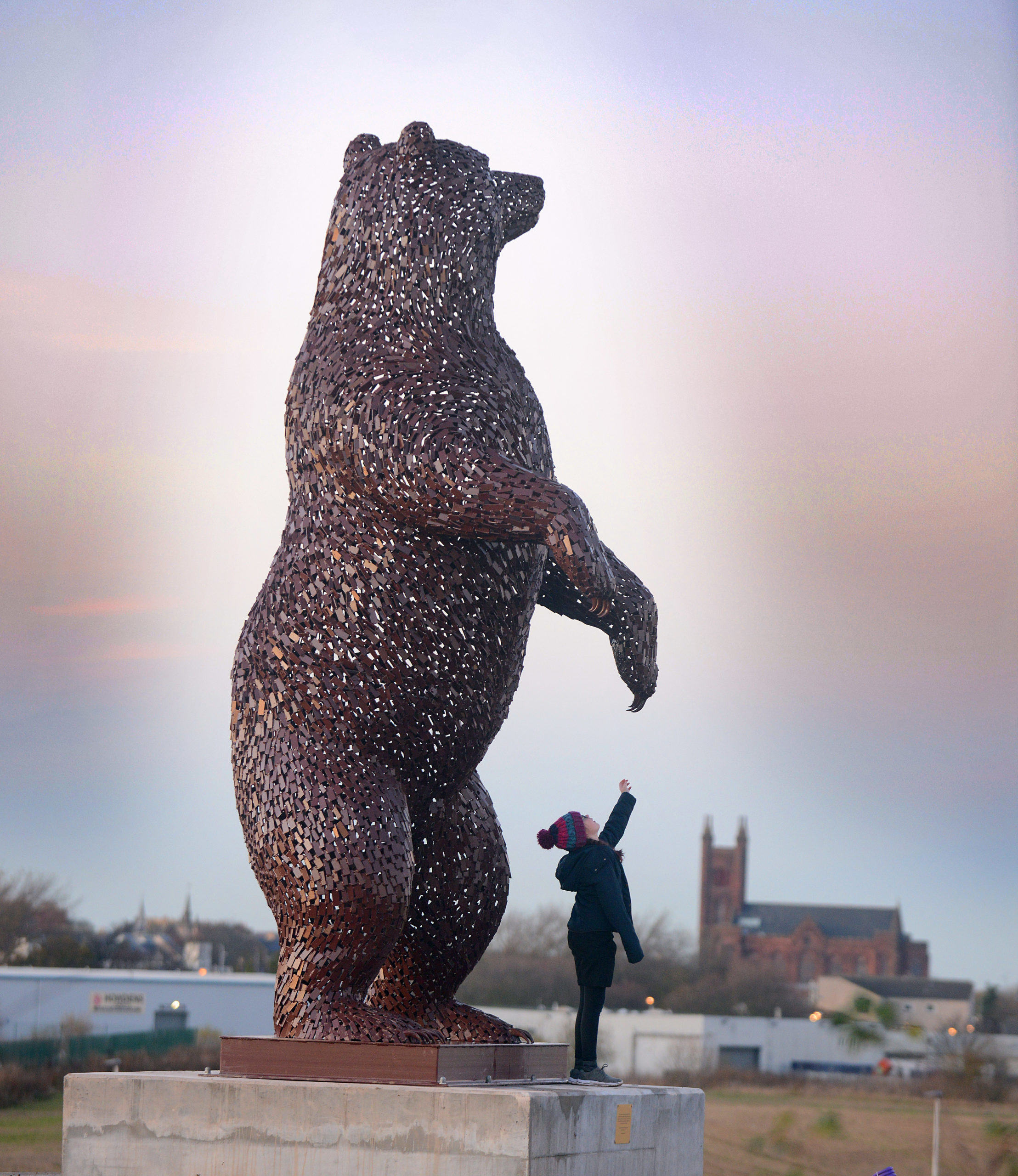 The sculpture, fixed to a base erected on a mound planted with wild flowers at the Spott roundabout near Dunbar, was unveiled this week. It will be illuminated by lighting produced with renewable energy.

John Muir, born in Dunbar in 1838, played a key role in the development of America’s national parks. He emigrated from Scotland in 1849 and petitioned the U.S. Congress for the National Park bill, establishing Yosemite National Park. The bear is symbolic of John Muir’s travels through the far-off wilderness of America’s west, in the Rockies and his advocacy for National Parks.

The event was marked by a reception comprising local dignitaries and school children from Dunbar Primary at the site, with Mrs Brenda McNeil from Hallhill Developments unveiling a plaque on the sculpture to mark the event.

A competition will now be undertaken with local schools to give the bear a name.

Situated at the eastern gateway to Dunbar, the location has been selected as it forms the primary gateway into the town and is visible from the east coast railway line and A1.

The sculpture is made of welded steel and is fabricated from steel plates of various thicknesses, heavy at the bottom and lighter towards the top, giving the structure an inherent strength. Visitors can access it via a walkway.

Andy Scott, a graduate of Glasgow School of Art, has completed over 70 projects across the UK and internationally. His distinctive hand-crafted figurative sculptures combine traditional skill with contemporary fabrication techniques.

He said:“It is fantastic to see this sculpture finally being erected as part of the Hallhill development, especially in memory of such an influential character as John Muir, which is particularly apt given today’s focus on the environment.

“This bear sculpture will provide an opportunity to enlighten people about the man and his work. It is a symbol of the wilderness John Muir was such a passionate advocate of and is testament to his incredible desire to protect the natural environment.”

Angela Leitch, Chief Executive of East Lothian Council, said:“We’re absolutely delighted that Andy Scott’s latest eye-catching sculpture has been unveiled here in East Lothian. It’s a highly appropriate way of paying tribute to John Muir, one of the county’s most famous sons, who played such an influential role in the development of America’s national parks.

“It complements fantastic attractions such as John Muir’s Birthplace in Dunbar and the John Muir Way, which continues to be a popular trail with visitors and locals alike. At five metres high, we’re sure the sculpture will become a real talking point, helping to draw even more visitors to the area.”

Ken Ross from Hallhill Developments commented: “The Hallhill development, which this bear sculpture forms an integral part of, has brought tremendous benefits to the area, including almost 600 jobs together with new much-needed homes, commercial and retail opportunities.

“The sculpture reflects the ethos of this sustainable development, which is part of the Dunbar community, where families can work, live and play. It is located next to good schools, public transport links, amenities and facilities, in the sunniest place in Scotland.

“Acting as a welcoming landmark to the town, it will not only contribute to the emerging identity of Dunbar’s new gateway but has the potential to draw people into the area to find out more about John Muir.” 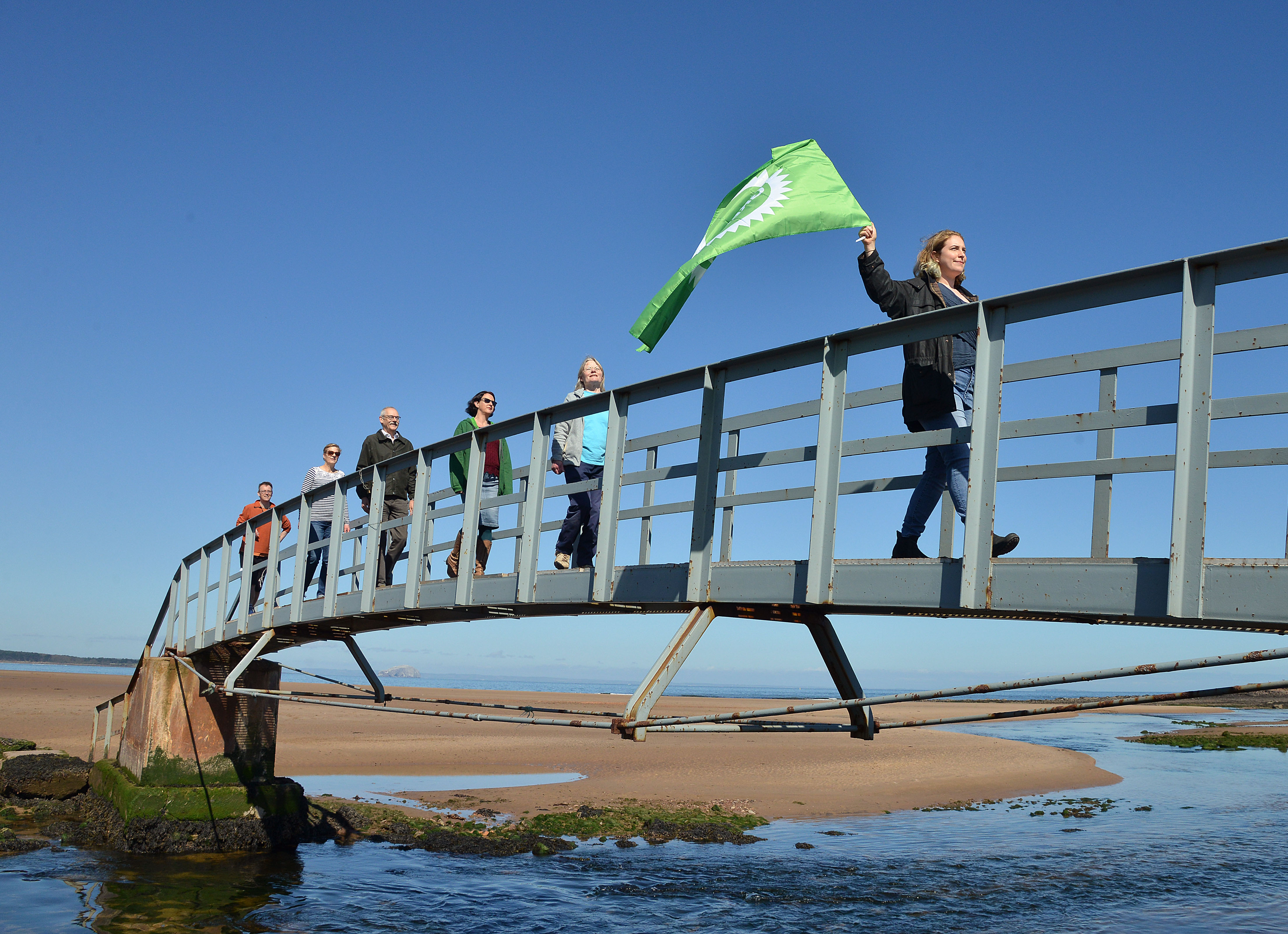