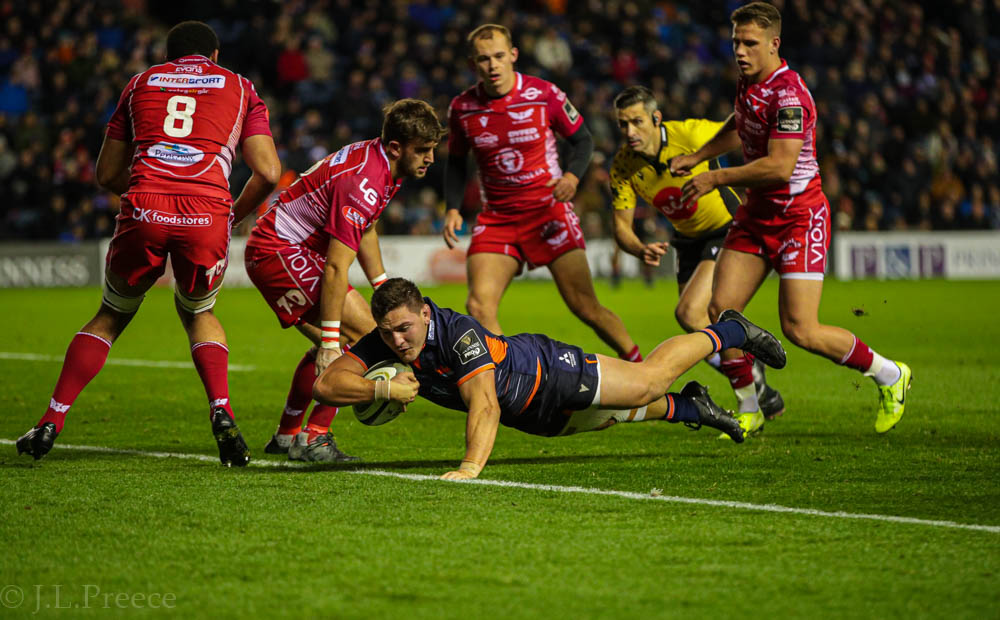 Scarlets Rugby made the trip up to BT Murrayfield for the fourth round clash in this season’s Guinness PRO14 with Edinburgh. Coming off the back of a heavy defeat away to Leinster in the previous round, the home side were looking to get back to winning ways.

And they started well, following the, now ‘standard’, kick-off/ kick-return/line out scenario. The ball was run back at the opposing defence, then was passed out to Duhan van der Merwe who made many metres before being tackled into touch (and precipitating a ‘life flashing before my eyes moment’ as it was pretty close – JLP).

Following another clearing kick, Edinburgh were, once again back on the charge through the centre.

First Matt Scott, then Ally Miller crashed through, with the final pass being offloaded to van der Merwe from Miller, allowing the winger to trot over for the opener in the seventh minute. The kick was missed, but it was 7-0 after 5 minutes.

Once again, Nick Haining, then Scott crashed though the defence to take play deep into the Welsh side’s 22, then a pop-pass off the floor allowed Mark Bennett to sling the ball out to van der Merwe for another trot in for the South African. Simon Hickey successfully kicked this conversion and the score was 12-0 after 10 minutes.

The Scarlets then had a few minutes of possession, and produced the first bit off meaningful defence from Edinburgh, but could make little, or anything of it, eventually kicking the ball away and puting the hosts back on the offensive.

As the end of the first quarter approached, Edinburgh were, once again, on the move.

Winning line out ball a few metres from the Scarlets’ line, Mike Willemse, playing in his debut match, peeled around the back of the line out maul and dived over for his first try in an Edinburgh shirt (title image).

Hickey then slotted home the conversion for 19-0

Scarlets saw a lot of the ball – and Edinburgh’s half – over the next 10 minutes or so, but still had to put in a few decent stops to prevent another break-out from the home side.

Just reward appeared to have come in the 34th minute when a tidy passing move down the right saw Keiran Hardy over in the corner, but the play was called back once the TMO had confirmed the the final pass had been forward.

That got Edinburgh’s juices in full flow once again and, just two minutes later, Mark Bennett broke through to score near the posts for 24-0 and the try bonus-point. Hickey, again, kicked the conversion and it was 26-0 with less than five minutes to play in the half.

It wasn’t all good, however, as a couple of minutes from the whistle, Fraser McKenzie was shown yellow for dangerously clearing out a Scarlets’ player from a ruck near the home line.

However, having survived the yellow card period, Edinburgh had to wait until the 52nd minute to add to their points tally via the boot of Hickey with a penalty to take the score to 29-0.

The second half started slightly less frantically, but no less concerning for the visitors as they came under pressure from the off.

The Welsh side then enjoyed another period of attacking possession. Bouyed by their half time substitutes, they made progress against the Edinburgh defence, driving deep into the home 22.

One of those subs, Keiron Fonotia, proved to be a particular handful and he marshalled the move that saw another sub, Marc Jones, fire over the line from the back of a ruck for a try. With the conversion converted, the score was now 29-7 to Edinburgh after 60 minutes.

The final 20 minutes belonged to the hosts as they ran in a further three tries – only one conversion, though – with a second for Willemse, a third – and hat-trick – for Man-of-the-Match van der Merwe and a 79th minute debut-match try for the other wing, Eroni Sau to take the final score out to 46-7.