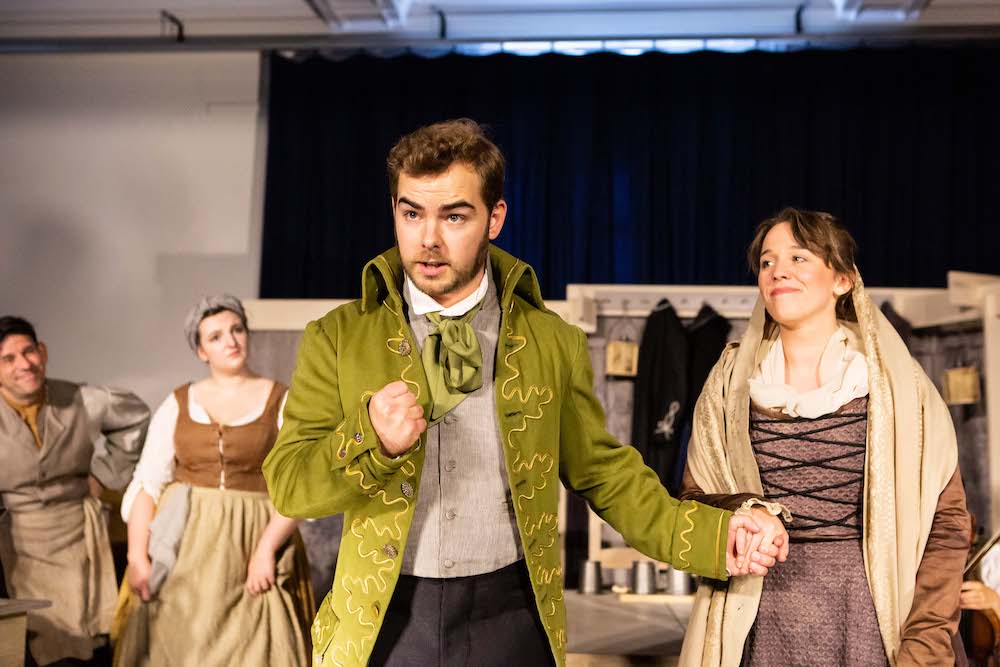 At first glance, one could hardly think of two more different artists than Robert Burns and Wolfgang Mozart, despite the fact that they are almost direct contemporaries. In the popular mindset Burns is the progenitor of Scottish romanticism and nostalgia, while Mozart represents the epitome of the enlightenment: graceful, refined, and maybe occasionally facile.

With their production Amadeus & The Bard: 18th Century Cosmic Brothers Scottish Opera are quick to acknowledge the difference between Mozart’s life as a prodigious celebrity touring the cities of Europe and Burns’ humble origins as the son of a farmer in rural Scotland, but also to draw compelling parallels in their shared precociousness, irreverent sense of humour, ambition and most importantly passion. Through the vessel of Burns’ and Mozart’s personal lives, interspersed with excerpts from their artistic work, the audience is offered an endearing insight into two pivotal figures of 18th-century culture in a performance that is part-biography and part-showcase.

Overall the show was skilfully crafted in taking a slightly obscure premise and structuring a narrative around it. The show’s creator Mary McCluskey takes the audience to Poosie Nansie’s tavern (a haunt of Burns) with the cast and instrumentalists as its patrons, who either narrate the lives of Rabbie and Amadeus or act them out by symbolically donning a different coat. This means that not only do the performers get to share out the roles of Burns and Mozart, but the audience feels deeply involved – being ‘told’ a story rather than merely ‘shown’.

The structure itself mirrors that of an opera, with the narrative moving quickly between musical items that allow the characters to voice their emotions, and as such the pace of the performance remains dynamic throughout. Such a setting inevitably seems to favour Burns’ story and occasionally one feels like the sections about Mozart’s life are ‘tagged-on’ as an afterthought, but the bulk of the musical material is Mozart’s and the analogues between the two men’s lives mean neither truly hogs the limelight.

The music itself was a mix of opera numbers by Mozart and songs or poems accompanied by folk tunes by Burns, and the musical standard in general was formidable. The performers seamlessly transitioned between Mozartian opera and Burnsian folk, including an ingenious quodlibet of Mozart and Burns tunes as the finale of the show – certainly the first time I’ve heard the Queen of the Night’s Aria and Auld Lang Syne sung together! Solo soprano Stephanie Stanway sang with an astonishing level of control, and solo baritone Arthur Bruce charmed the audience with stylish musicality, captivating stage-presence and a ‘cheeky’ personality ever shining through.

The ensemble was made up of four members of the Scottish Opera Young Company, although in reality they shared enough of the singing that they practically deserved equal billing with the soloists. As an ensemble they were homogenous and responsive, but truly blossomed as soloists. Soprano Cara Blaikie had a sincere voice, perhaps a touch underpowered in an unforgiving acoustic, and made a delightful Papagena for the duet from the Magic Flute. Baritone Ross Fettes showed a satisfyingly resonant sound with true hints of ‘bassiness’ in the lower register – no mere light-baritone’s growl – while tenor James MacIntyre displayed a flair for acting, although his diction occasionally obscured the sung text. Soprano Erin Spence had a sparkling yet romantic voice showing some truly great potential. Her sections from Don Giovanni were exquisite, as was her rapport with Bruce as the Don.

Violinist Shannon Stevenson played Scots tunes both before and during the performance, being not merely an accompaniment but an additional character in the scene, as was musical director Karen MacIver on piano and accordion. Yet perhaps the star of the show was multi-talented storyteller Andy Clark, who truly beguiled the audience with impeccable comedic timing, astonishing musical sensitivity whilst reciting poetry to music, and even occasional stints on the guitar or singing himself.

The climax of the performance was a presentation of two ‘demonic’ scenes – first a recitation of Burns’ Tam o’ Shanter, then the concluding scene of Mozart’s Don Giovanni as the Don is dragged into the pits of Hell. The former was unquestionably the high-point of the show, as the scenes of witchcraft in the poem were chillingly brought to life with the ensemble singing sections from Mozart’s Requiem pertaining to wrath and hell-fire.

It was at this point that the two ‘heroes’ of the show seemed their most alike – Burns’ morbidity and sorrow, the embodiment of a wounded 18th-century Scotland, and Mozart’s brooding, tempestuous character, seldom seen in his concert music but bursting through to the surface in his more ‘personal’ compositions such as the Requiem or the Masonic Funeral Music. Perhaps for both men this stemmed from a combination of unrelenting ambition and frustration at their impoverished circumstances and ill health. Neither made it past their thirties and, as noted at the show’s conclusion, both left a legacy far greater than the recognition they were given during their lives.

Amadeus & The Bard does a sterling job of weaving together the lives of Burns and Mozart into a thoroughly entertaining introduction to their lives and works. Its dynamism and self-aware sense of comedy means there is something in it for anyone regardless of age, musical taste or familiarity with either artist, while the narrative is just detailed and touching enough to spark the audience’s imagination and leave them wanting more. If I were to be starry-eyed idealist I’d suggest the ‘moral’ hinted at here is that great artists, despite their individual circumstances – be that economic or geographical – are fundamentally alike, and entirely human.