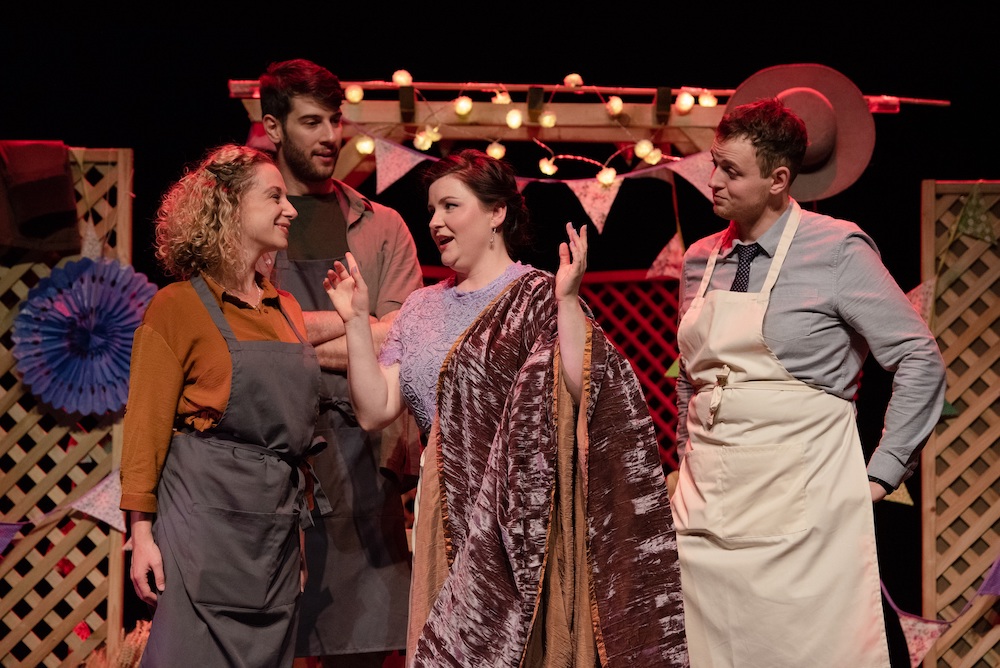 Any musician will tell you one of the trickiest tasks when putting on a varied performance is forming the programme itself. Finding pieces that complement each other musically can be straightforward, as can finding a narrative theme, but marrying the two can be an almost impossible task.

Yet Opera Highlights attempts, and delivers upon, the impossible. Through crafting an overarching plot just complex enough to captivate the audience, but simple enough to not feel intrusive in what is essentially a ‘staged’ concert, Scottish Opera presents a performance that feels as much a showcase of composers as it is the performers. Something that really made the programme special was the inclusion of a number of pieces that might not otherwise get an ‘airing’, including most notably music from the recently rediscovered Ethelinda by Victorian female composer Mildred Jessup.

The premise chosen for Opera Highlights was a garden party to which four guests (and, as the brochure states, the whole audience) have been invited. Clearly the intention of this was to make the audience feel part of the narrative and as such there were a couple of moments of ‘breaking the fourth wall’ where the characters actively addressed the audience – these, however, were too few and far between be truly believable and if anything actually undermined the story as presented on stage.

Perhaps this would have been more successful if committed to throughout the performance. With items from various operas nevertheless performed as if part of one narrative there was an inevitable element of absurdity, which was wholeheartedly embraced using overblown and often astonishingly naïve characters and a plot so convoluted it could only be seen as a parody of the opera genre itself. The overall effect of this was hilarious and surprisingly endearing.

Act one introduces the four characters: Jason (Mark Nathan, Baritone), Molly (Martha Jones, Mezzo-Soprano), Sophie (Charlie Drummond, Soprano) and Andrew (Alex Bevan, Tenor). Sophie and Andrew are a loving but slightly dysfunctional couple and, after an awkward encounter between Jason and her, Molly confides in her close friend Sophie how she has been infatuated with Jason since they were young. The group, having greeted each other with a quartet from Mozart’s La finta giardiniera, tries to discover who and where the host of the party is, to no avail, instead finding a list of tasks to be completed before the party commences.

The next section of plot is shaped by several baroque and classical duets and arias. When Jason shows affection for Sophie, Molly hatches a plan to force herself and Jason together, by posing as Sophie for an evening rendez-vous, which Sophie reluctantly agrees to.

Andrew spots Sophie and Jason arranging their meeting and wrongly assumes Sophie to be unfaithful. Jason meets Molly (now disguised as Sophie) and, with jocular implausibility, the two enjoy flirting until Jason eventually realises who she truly is and storms off stage. By now Andrew has realised Sophie’s flirting with Jason was a ruse, and the two have a night-time rendezvous of their own.

Molly sings a lament following Jason’s scorning of her, but is instead placated by Sophie – represented by ‘Give him this orchid’ from Britten’s The Rape of Lucretia and the ever-popular Flower Duet from Deliebes’ Lakmé.

At the end of the act Andrew still seems shaken by Sophie’s feigned attraction to Jason. Jason meanwhile laments his situation, believing no woman will ever love him, but Sophie persuades him that he really does have feelings for Molly. This last ‘scene’ is realised musically as the Papageno/Papagena duet with preceding aria from The Magic Flute, curiously with Molly ‘acting’ Papagena but Sophie ‘singing’ her – a bizarre effect, but one which successfully conveyed the idea of Sophie setting up the couple.

Act two is far less plot heavy, but perhaps more interesting musically. The party guests, following the list’s instructions, provide entertainment for the soirée in the form of a number of ensemble and solo items, beginning with a new commission for the entire ensemble from Scottish Opera’s resident composer Samuel Bordoli.

Once the entertainments are over it becomes apparent that Andrew is planning to propose to Sophie but is reticent. Similarly it is revealed that Sophie is in fact pregnant, but has been trying and failing to tell him. Sophie struggles with an uncertain future, but eventually plucks up the courage to tell Andrew, who likewise offers marriage.

Most of the ‘entertainment’ music was from Savoy opera: two items by Arthur Sullivan (from Ruddigore and The Gondoliers) and an additional two by Sullivan’s acolytes Edward German and Alfred Cellier, showing how the vine of Savoy opera was just as fruitful without Sullivan’s input.

Yet the true gems of this second act were the folk-styled pieces reflecting the tension and resolution between Sophie and Andrew – the quintessentially English duet ‘Blue larkspur in a garden’ from Vaughan Williams’ The Poisoned Kiss and the haunting aria from Carlisle Floyd’s Susannah, ‘The trees in the mountains’. Taken out of their respective operas I was struck by the remarkable affinity between these composers.

Finally the host of the party is revealed – pianist and MD Ian Shaw, who accompanied the show with great sensitivity and smoothness – and the show concludes with the full ensemble singing ‘The promise of living’ from Copland’s The Tender Land. It is an earnest exhortation to love and cooperation (a perfect artefact of Copland’s gentle socialist beliefs), with a simplicity that feels almost sacred in character.

The standard of performance was formidable from all four singers, but the one who really shone through from my perspective was the tenor, Bevan. In Lully’s ‘Bois épais’ from Amadis he demonstrated astonishing emotional and musical sensitivity as well as some very stylish ornaments, and his versatility throughout the performance was admirable, shifting effortlessly between styles while never failing to engage the audience.

Soprano Drummond had great vocal control, with real ‘bite’ in her voice at louder dynamics (although causing a touch of shrillness in the higher register). Her sorrowful sincerity in the Floyd aria was heartbreaking and while some would criticise the choice to sing it in a ‘British’ accent and style I felt this added a new perspective to the piece and avoided any uncomfortable ‘imposter’ moments.

Mezzo Jones really came into her own with the Britten, a devastatingly powerful performance making me wish I could hear the entirety of Lucretia with her at the fore. If anything I felt it a shame her rich lower register wasn’t showcased more.

Baritone Nathan has a clear penchant for comedic roles, apparent both in the scenes from Magic Flute and the Gilbert and Sullivan numbers later in the show, and a healthy resonance in the middle and upper registers however his lower register seemed a touch uncontrolled, with a shuddering vibrato that obscured the intended pitch. A general criticism would be that the acting was far more convincing when the performers were singing, feeling a touch stilted when they were simply speaking, yet there were many instances of priceless comedic timing.

All in all the garden party premise really suited the show, allowing for a variety of musical moods and styles by winding a sometimes farcical plot around the singing – the love triangle (or rather love parallelogram!) subplot was particularly amusing. There were, however, a few moments where the premise felt somewhat jarring.

The aria from The Rape of Lucretia, which might have otherwise been the highlight of the performance, was trivialised when presented in the context of a puerile garden party romance, and the new commission from Bordoli – a text from the Ovid rendered in refreshing counterpoint reminiscent of 16th-century madrigals – didn’t seem to bear any relation to the narrative at all; Bordoli’s masterful music surely deserved better treatment than this.

What is for certain is that Opera Highlights took the genre of the showcase concert and breathed into it fresh new life. It impeccably struck the balance between favourites of the operatic canon and more obscure works, with the audience always on its toes as to what would be next.

Despite a seemingly daunting runtime of over two hours it wasn’t for a moment tedious; rather thoroughly dynamic and engaging. But most meaningful was the overwhelming sense of joy cast by the performers, the music and the narrative; I couldn’t help but leave with a smile on my face.

Opera Highlights, devised by Derek Clark and the company and directed by Roxana Haines, has concluded its 2019 run.

You can find details of Scottish Opera’s other upcoming performances here.