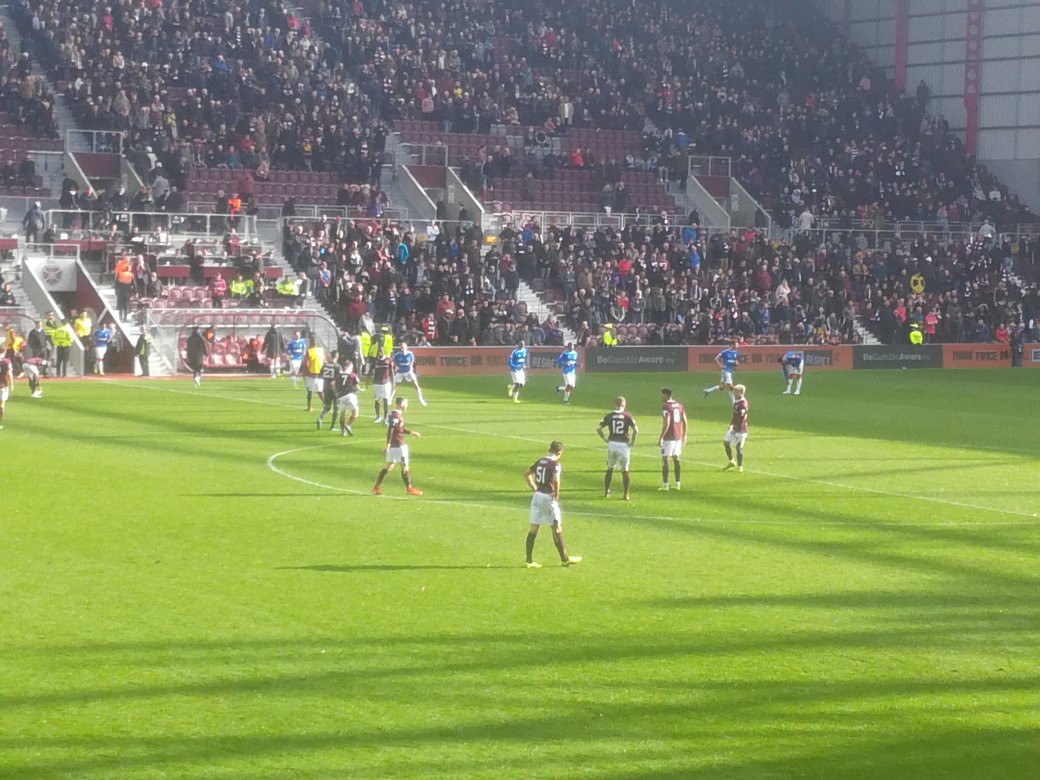 Hearts earned a point from league leaders Rangers after a scrappy Ladbrokes Premiership encounter at Tynecastle on Sunday. Ryotaro Meshino gave the hosts an early lead before Morelos equalised for Rangers just before half-time.

Having not won a league game at Tynecastle since March, Hearts have been criticised for recent displays, particularly in Gorgie. Manager Craig Levein has borne the brunt of the fans dissatisfaction and some fans are even turning on owner Ann Budge. Indeed, there was a banner in the new main stand proclaiming ‘Budge and Levein Have Stolen Our Club’ a clear indication of the unhappiness of some of the home support.

As is customary, Levein made three changes from the team that lost to Kilmarnock in the last game a fortnight ago before the international break. Striker Uche Ikpeazu returned and there were surprise inclusions for Oliver Bozanic and Aidy White. The injured Loic Damour missed out while Andy Irving and Clevid Dikamona moved to the substitute’s’ bench. Dikamona will feel particularly hard done by as he impressed against Killie and it was difficult to fathom why he had been left out against Rangers.

Tynecastle was packed for the Sunday lunchtime kick-off and the Maroon Army didn’t have long to wait to rise to their feet. Just a couple of minutes in, Sean Clare crossed from the right, Uche Ikpeazu rose above everyone to head his cross goalward and the ball smacked off the crossbar.

That set the tone for a tumultuous start from the home side and in the sixth minute they took the lead.  A mistake from Tavernier allowed Jake Mulraney to take advantage and while his shot on goal was saved by keeper McGregor the ball fell to Ryotaro Meshino who dinked the ball over the Rangers goalie and into the net.

It was the perfect if somewhat unexpected start for Hearts but it’s fair to say the game was hampered thereafter by some meaty challenges from both sides and an over officious referee who gave some bizarre decisions for both sides. Then again, Kevin Clancy has history in this respect.

Just after half an hour Rangers nearly equalised when a diving header from Davis went just wide and one began to get the feeling this might finally be Hearts day. However, that feeling was diluted seven minutes before half-time when Rangers equalised. Aaron Hickey gave away a needless corner and from the cross Morelos was given far too much space to ram the ball home to make it 1-1. The Columbian striker then needlessly ran towards the Hearts fans in the Gorgie Stand. Hearts are investigating alleged racist abuse towards the player and have said they will ban any fan who is found guilty of racist behaviour.

The second half was an end-to-end affair, but it has to be said the quality of football on display was poor. Crunching tackles and curious referring decisions didn’t help. Hearts injury jinx was lurking, however, and Aidy White departed the scene just four minutes into the second half, being replaced by Jamie Brandon. With ten minutes left Jake Mulraney hobbled off with what looked like a knee injury. The former Inverness Caledonian Thistle player was replaced by Andy Irving and Hearts await the result of this latest injury.

In injury time, Hearts had a chance to take all three points when Oliver Bozanic’s long throw into the Rangers penalty box  found the head of captain Christophe Berra but the skipper’s header was too direct towards Rangers keeper McGregor.

In the end a point apiece was about the right result and means Hearts move above Hibernian in the Ladbrokes Premiership table.

After the game Craig Levein had mixed emotions. He told the official Hearts website:

“I’m pleased but a little bit irritated about the way we lost the goal – at a set piece. But, the commitment, the effort, the competitive edge was there, and it was very apparent, which we needed,” said the Hearts boss.

“The test for us now is to find that every single week. There’s no point in doing that today, then next week not doing ourselves justice.”

“I feel that it was important today that we showed our supporters that we’re fighting and desperate to do well just as they are.”

Top man: Michael Smith – a couple of misplaced passes aside, the Northern Irishman was immense yet again today.