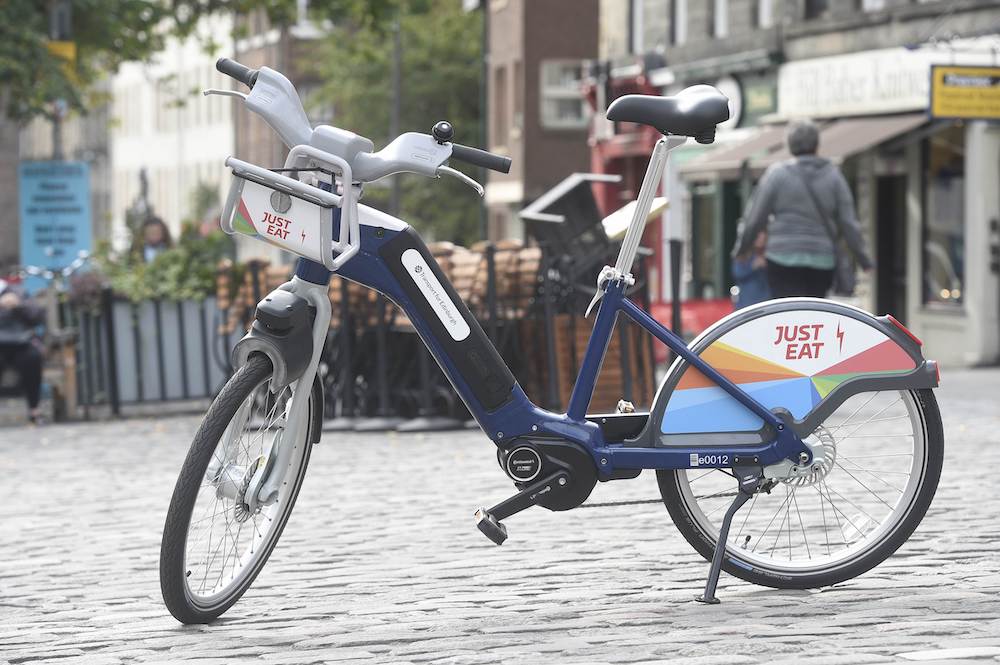 The first batch of 30 e-bikes will be tested out in the coming months before 168 electric bicycles are put out for public use in the spring.

They will have a maximum speed of 15mph with a constant electric assist, enabling you to whizz up The Mound or any of the other steep slopes in Edinburgh which make your cycle route too daunting. You will be able to use the same app to unlock the e-bikes and they will be located across the 75 existing hire points with the other 500 bikes.

They will have a slightly different frame and colour scheme, but otherwise they will be made by Pashley as the existing bikes are.The slim battery pack and motor is designed by German automotive manufacturer Continental.

The first time you will be able to get your hands on one is at the Open Streets event on 6 October 2019.

Charles Graham of Serco, General Manager of Just Eat Cycles said: “It’s exciting to see the first e-bikes arrive in the city. In the spring the people of Edinburgh will have access to a fleet of e-bikes, which will provide an alternative mode of transport which is sustainable and cost effective. The e-bikes will help re-introduce cycling to harder to reach groups, including older users and those who may not have ridden a bike for many years.

“Edinburgh’s hills can be intimidating for some, but with a constant electrical boost, getting up some of Edinburgh’s steepest braes will be considerably easier using our e-bikes. There are clear patterns of use which show many people riding pedal bikes downhill to areas in Leith and the New Town. It is our hope that e-bikes will be the incentive for people to try the return leg of the journey by e-bike.”

George Lowder, Chief Executive of Transport for Edinburgh, said: “I’m delighted to see the first e-bikes arrive in the capital. This is an important step as we look to continue providing residents with a range of carbon friendly transport options to choose from. E-bikes are a fantastic example of how city-wide cycling can be made as accessible as possible. It’s our hope that the continued success of Edinburgh’s cycle hire scheme encourages more people to consider cycling as a low cost and convenient travel option.”

Transport and Environment Convener Councillor Lesley Macinnes said: “I’m really looking forward to the introduction of e-bikes to Edinburgh’s cycle hire scheme, which will let even more people experience the Capital on bike. The cycle hire scheme has been an extremely welcome addition since its launch last year, offering a sustainable, healthy and enjoyable transport alternative for people living in or visiting the city. As an e-bike user myself I know how much easier they make navigating Edinburgh’s hilly terrain, so I’m pleased that this roll-out will help cyclists of all abilities benefit from the scheme.”