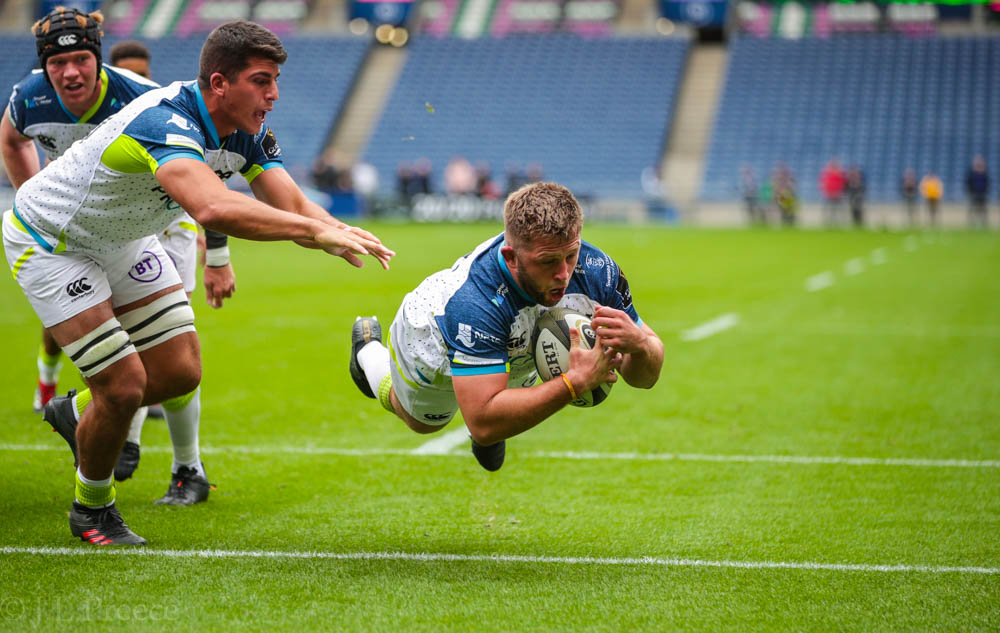 On paper, Saturday’s match against Ospreys looked to be the more taxing of Edinburgh’s two pre-season friendlies, played to get the side ‘going’ before the season proper starts in two weeks. In reality, the paper was, more than likely, correct…

Both sides were shorne of Internationals, but Edinburgh, probably, fielded more ‘well kent faces’ than the visitors, but very few Ospreys’ sides over the years have lacked depth in ability come match day.

From the off, the team from Wales showed the hosts that names aren’t everything as they proceeded to dominate the match for the first 10 minutes, or so.

Edinburgh, for their part, held up strong in defence, but were coming under increasing pressure in their own territory. A break up the line from Osprey’s Hanno Dirksen took the ball close to Edinburgh’s line, but they secured possession and cleared upfield.

Only for a couple of minutes, though, as the visitors won a penalty and, from the resultant lineout, set up a rolling maul, propelling hooker, Sam Parry, over for the opening score. With the kick missed, Ospreys were 0-5 ahead after 12 minutes.

Edinburgh kicked deep from the restart and were then up quickly to force a, less than ideal, clearance. A superb block from Pierre Schoeman on a Harri Morgan box-kick then put further pressure on the Welsh defence.

Another clearing kick was gathered cleanly and set up the period of pressure that lead to Edinburgh’s opening score.

Hooker, Dave Cherry, collected the ball off the top of a lineout with a wrap-round move and immediately passed to centre Matt Scott about 10 metres out. The No. 12, then crashed through the first tackle, spun round and charged over the line for the try. Jaco van der Walt then slotted the conversion through for 7-5 after 23 minutes.

Five minutes later, they were over the line again.

Scott started the move, driving Osprey’s Luke Price back about 10 metres in a tackle, then the visitors were pushed back on the defensive and forced to kick.

The ball was gathered in by Edinburgh and sent wide, through the hands, out to Jamie Farndale on the right wing. The former 7’s player then had the, relatively, easy task of galloping in the remaining 30 metres to touch behind under the posts. Van der Walt then converted to take the score out to 14-5 with just over 10 minutes left in the half.

The home side now had their tails up and almost scored a third through van der Walt, but the sides went into the break with Edinburgh retaining their 14-5 lead.

Immediate pressure from the Welsh side after the restart, lead quickly to the opening score of the second half.

They moved the match into Edinburgh territory, then, on in place of Dirksen, Luke Morgan gained possession of the ball and blasted through from deep to go over for the try. Price then converted to make it a 14-12 scoreline with five minutes of the half played.

Just after 50 minutes, Edinburgh almost capitalised on pressure near the visitors’ line with a third try, but a closer look revealed that scrum half, Nic Groom had the ball dislodged before touching down, so it was a scrum restart on the five-metre line.

Following the usual ‘friendly match’ raft of substitutes, the game went in to long period of stagnation, mostly played between the 22’s. Both sides showed some enterprise, but neither managed to break through to take advantage.

Until 15 minutes before the end, at least. Back on to replace his own replacement, Chris Dean, Matt Scott started the move deep in Edinburgh’s 22, breaking clear and getting his pass away to sub, Ally Miller, putting the flanker in the clear.

He charged up the pitch with Scott and James Johnstone in close support, Scott being on hand to receive Miller’s offload, which he then passed on to Johnstone to get his fellow centre through.

Johnstone almost made it all the way to the line, but was dragged down by the last defender. However, Scott was still up with play and he collected the ball to score Edinburgh’s third – converted by Simon Hickey – try for 21-12 with about 14 minutes left to play.

Less than five minutes later, Ospreys were on the scoreboard again. Following on from a couple of penalties, the decisive lineout was set a few metres out from the hosts’ line.

With possession secured, the resultant maul crabbed a few metres infield before No.16, Scott Otten, broke away to dive over. Another sub, Cai Evans then converted for a 21-19 score.

With five minutes left to play, Edinburgh were now hanging on, but a couple of moments of indiscipline won the match for Ospreys. A penalty to touch for a ruck infringement was quickly followed up by another for the same. This, second, one was within kicking distance, though…

Evans stepped up and slotted home the, not so easy, kick to take the lead 21-22 for the visitors, a lead they held onto with a superb display of ruck possession for the final few minutes and the win.

Friendly matches never really show the hand of either side in the run up to the competitive season, but Richard Cockerill might have gone away from this one mulling over how he was going to change the ‘habit’ his side seem to have in losing matches in the final few minutes.