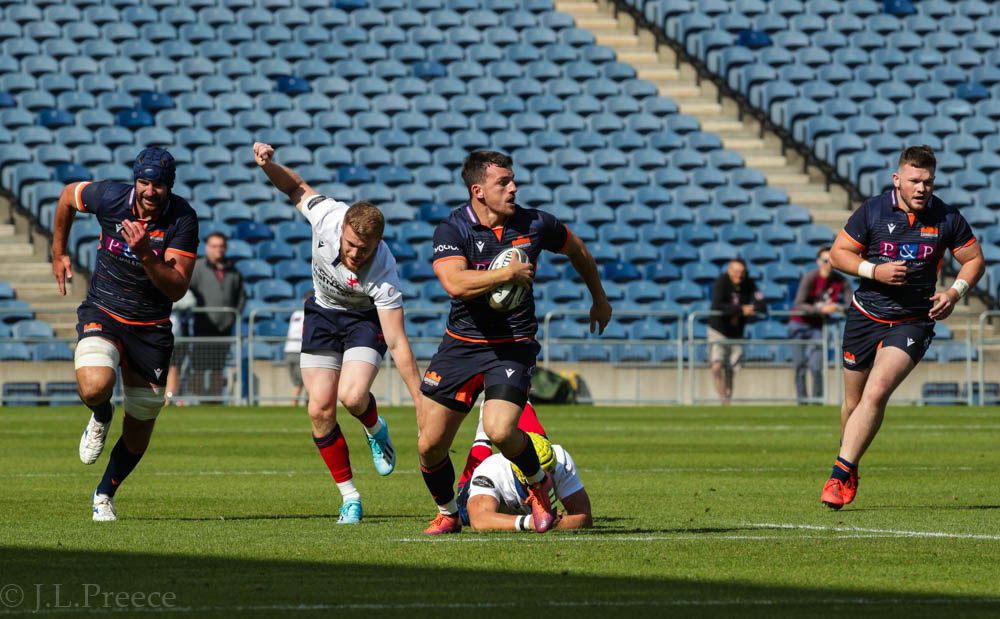 What purpose does the pre-season friendly serve? In many a football equivalent, the match serves as an indication that players have no wish to be injured before the start of the season proper, so it’s a bit ‘tentative’ to say the least. With a full-contact sport like rugby, ‘tentative’ tends to mean ‘injury’.

So, with that in mind, what was the match like. Or about….

Both sides had named a raft of subs, who may, or may not, have been fielded, but it gave the coaches of both sides the chance to convert training scenarios into a competitive encounter.

And it was clear, with some big tackles from the off, that neither side was going to back down. Possession and territory were fairly evenly shared for the first ten minutes or so, but Edinburgh gradually started to exert some sort of dominance and pushed London Scottish back to their own goal line.

That move ended in a Scottish scrum and clearance, but a pitch-wide passing move a few minutes later saw Jamie Farndale over in the right corner for the opening score. Jaco van der Walt then continued from where he had left off last season and converted for 7-0 after 14 minutes.

Seven minutes later, the home side scored their second. Regaining possession soon after the restart, Edinburgh pinned the visitors back in their own 22, before winning a scrum on the right of the posts. The ball ended up with new signing, Nick Haining, and the No. 8 crashed over in the same corner for the second, but unconverted, try and 12-0.

While the home side were busy patting themselves on the back, London Scottish got on with the job in hand and, two minutes later, wing, Rob Stevenson, ghosted through a big hole in the defence and under the posts for 12-5. That was then 12-7 following Harry Sheppard’s conversion.

Another 10 minutes, or so, of to-and-fro rugby then ensued, but the home side were beginning to dominate proceedings, especially through the pack. A long series of pick-and-goes on the Scottish line pulled in more defenders so that, when the ball was finally released, Dougie Fife had a relatively unopposed trot in for try number three.

van der Walt then converted from fairly wide, so, with five minutes remaining in the half, it was 19-7.

Two minutes later, it was 26-7 when team captain, Chris Dean, crashed over near the posts for the fourth try, which van der Walt converted to go into the break 19 points to the good.

With Edinburgh looking increasingly on top, it took only four minutes of the second half for the fifth try to be scored. Following a penalty line-out, another new face, Ewan Ashman, smashed his way over to take the score out to 31-7.

And so it went on. Further tries from another debutant, Nic Groom – scored at the end of a handling nightmare, with the ball being batted about in the air – Damien Hoyland and Jack Blain saw the score up to 50 by the 65th minute mark.

London Scottish, for their part, scored their second try of the day off the back of a repeat of Edinburgh’s pick-and-go play in the first half. This time, however, the backs never saw the ball as lock, Luke Frost, piled over from the back of a ruck to score under the posts. Dan Barnes then converted to bring their tally to 14.

A few minutes after the hosts brought up their 50, Barnes scored a try of his own with a battling effort through a sea of defenders to touch down for 50-19, Charlie Gowling converting for 50-21.

The final, and ninth Edinburgh, try was scored by Tom Brown and converted by Simon Hickey to bring the final score up to 57-21.

What was it all about, though? Who knows really, but it would have given back-room staff a chance to look at their new signings in a competitive situation and see if they blended well with the ‘established’ players. And they would also get an idea of whether the work done in the ‘off-season’ could be carried through to the ‘on-season’. Only time, of course, will tell.

The new faces brought in over the summer certainly held their own in the Edinburgh set-up, but you get the feeling that – without taking anything away from the London Scottish performance – the second warm-up match in a fortnight against Wales’ Ospreys might prove to be a touch warmer than yesterday’s.

Images from the match will appear here over the next few days. (It’s just a black – well, dark grey, hole at the moment…)