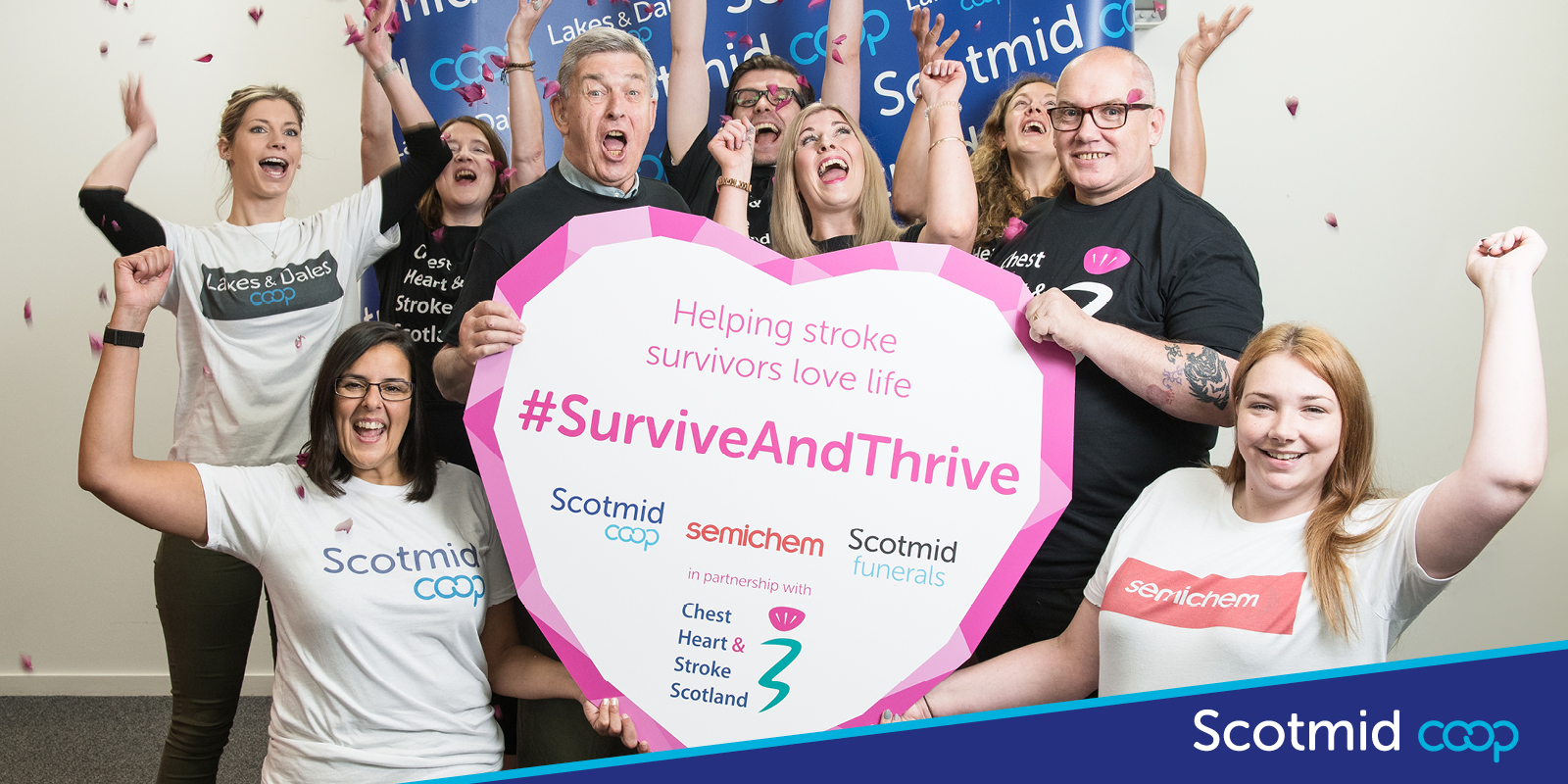 Scotmid Co-operative has announced Chest Heart & Stroke Scotland as its 2019/20 Charity of the Year – aiming to raise £300,000 to support stroke survivors to rebuild their lives and thrive.

The year-long partnership between the charities – including Northern Ireland Chest Heart & Stroke (NICHS) and England’s Different Strokes – and Scotmid aims to not only raise a substantial amount of funding but also to increase awareness of the vital work the charity carries out in helping people, who have suffered a stroke.

In the communities served by Scotmid, one in five people are affected by chest, heart or stroke conditions. 100,000 strokes take place in the UK every year and more people are surviving. Leaving hospital is only the start of their rehabilitation journey. Without support, survivors can be left feeling anxious and frustrated, which can lead to social isolation and depression.

The rehabilitation support workers and volunteers help people, who have survived a stroke, to achieve the things that are important to them, so that while their life will never be the same again, it will still be worth living.

Jane-Claire Judson, Chief Executive at Chest Heart & Stroke Scotland, said: “We’re absolutely delighted to have been chosen as Scotmid’s Charity of the Year! The new partnership will help thousands of stroke survivors and their families in Scotland rebuild their lives.

“Throughout the year Scotmid will be raising money to fund our vital Rehabilitation Support Services. Our services support people after a stroke to regain their confidence, achieve their personal goals and get back to doing the things they love. We are really looking forward to working together to help ensure there is no life half lived in Scotland!”

John Brodie, Chief Executive of Scotmid Cooperative, said: “We are really excited to announce our new Charity of the Year partnership with Chest Heart & Stroke Scotland. The target of this year’s partnership will be to raise money to fund the charity’s vital Rehabilitation Support Services.

“This is a cause that strongly resonates with our staff, members and customers because one in five people in the communities we serve will be affected by chest, heart or stroke conditions.

“Our core purpose is to serve our communities and to improve people’s everyday lives, so the partnership is an excellent fit. Our aim during this charity partnership will be to raise the funding to help people, who have suffered from a stroke, to both survive and thrive.

“There are a lot of plans in the pipeline already for fundraising, so we look forward to talking to staff, members and customers about how they can help us to raise as much money as possible for Chest Heart & Stroke Scotland.”

Paula Leask had a stroke when she was 29 years old. It happened when she was ceilidh dancing with her husband at a friend’s wedding in 2016, when she suddenly started to feel dizzy and collapsed.

Paula said: “I was in such a dark place after my stroke but I managed to get through it because of the love and support of amazing people around me.

“I’m now helping stroke survivors and their families at Chest Heart & Stroke Scotland and it feels like an incredible place to be. I want to take this difficult time in my life, un-box it and do something positive for others going through the same experience as I did. I want to give people hope for the future and help them move forward with their lives.

“I’m so pleased that Scotmid has chosen Chest Heart & Stroke Scotland and I know that it’s going to be a truly special year of fundraising. Together we can double the energy and the support for so many people and families all across Scotland and really change lives!”