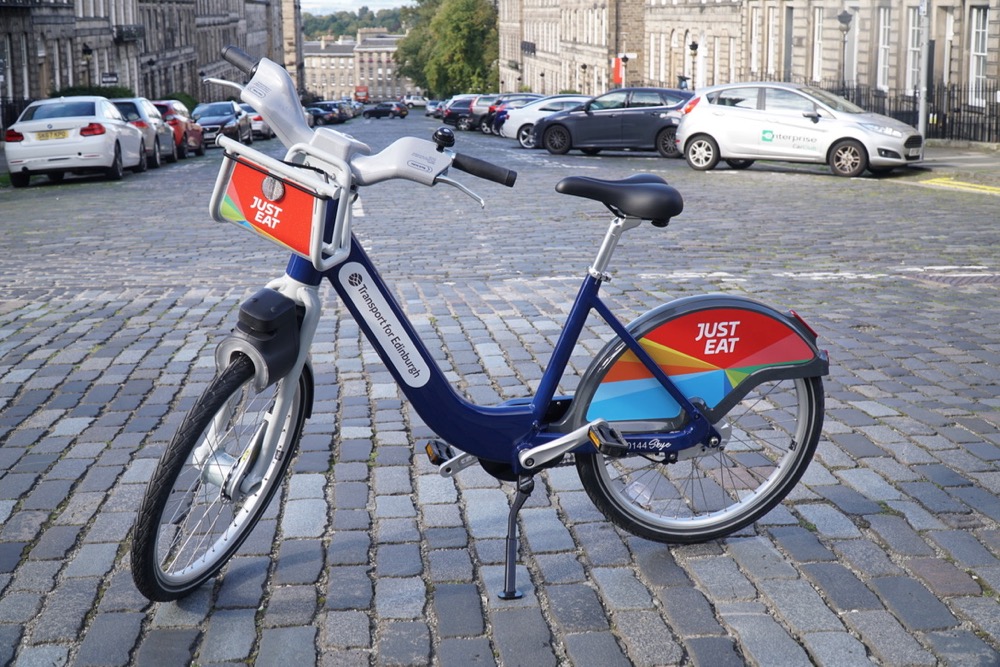 Edinburgh’s own cycle hire scheme sponsored by Just Eat is celebrating its first anniversary this month with almost 100,000 bike rides in the last year.

Since the scheme was launched on 17 September 2018 a total of 98,176 unique trips have been made. The bike hire scheme is run by Serco on behalf of Transport for Edinburgh.

There are now 75 hire points around the city, and around 500 pedal bikes across the fleet although electric bikes have been promised.

Perhaps due to some good weather and the festivals, August was the busiest month with approximately 565 trips a day. 17,529 rides were made during August 2019.

Throughout the year the average length of a trip has been around 3km or 23 minutes – although the longest trip made on the bikes is a whopping 65km. The scheme is at its busiest during rush hour, with hires spiking between 5.00pm and 6.00pm, and also around lunchtime. Some of the keenest users have used the bikes to take almost 500 trips each.

Just Eat Cycles has recently engaged with the student population of Edinburgh, installing a hire point at the Queen Margaret University campus. Bristo Square, near the University of Edinburgh, continues to be the most popular bike hire point for tourists and students alike.

Charles Graham of Serco, General Manager of Just Eat Cycles said: “People cycling around the streets on our bikes is now a common sight in Edinburgh, and we’ve become part of the transport landscape. In the last year we’ve learnt so much about what people want from their city bike scheme and how they want to engage with cycling in the city.

“Encouragingly, we have seen significant growth over the last six months as well as particular spike in usage between May and August, which leads us to believe we’ll far surpass 100,000 trips in year two.  We’re excited for what the next year holds and to get even more people on our bikes.”

A One Hour Pass is available from £1.50, and a Day Pass is £3, and an annual pass costs £90. The Just Eat Cycles app is available to download from the App store and Google Play.