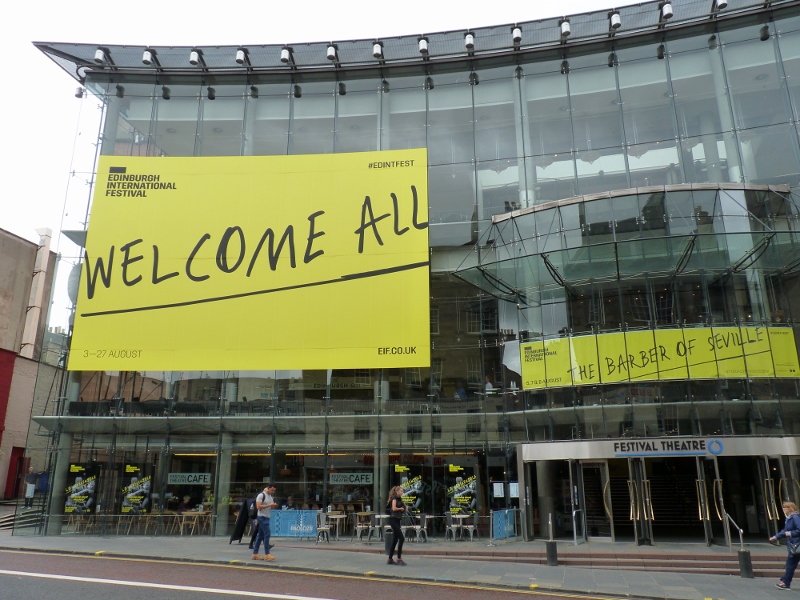 The musical, On Your Feet! is the story of Emilio and Gloria Estefan and it is
coming to Edinburgh’s Festival Theatre (pictured) from October 7 to 12.

It charts the couple from the back streets of Cuba to international stardom and the Daily Mail told readers that this was a ‘glorious night out with Gloria’. It is thoroughly enjoyable.

Based on a book by Alexander Dinelaris, it features music produced and recorded by Emilio and Gloria and the Miami Sound Machine.

The musical, which comes to Britain direct from Broadway, closes at London’s glorious Coliseum on August 31 before going on tour and, judging on the reception in London, audiences will be on their feet at the finale. Almost all of the audience were on the night we saw it.

It’s exhilarating, entertaining and the enthusiasm of the cast oozes from the huge stage. What’s more, there is a story to be told.

Behind the scenes, and without giving away too much, it was not all jet-setting, chart-topping and headline-making for Gloria.

There were gut-wrenching moments and massive hurdles to cross as they tried to establish their Latin music to a non-Latin audience.

Despite everything, they finally made it to world stardom before an accident on a snowy night in America turned her world upside-down.

However, if you like the music – remember smash hits including Rhythm Is Gonna Get You, Conga, Get On Your Feet, Don’t Want To Lose You Now, Dr.Beat and 1-2-3 – then you are in for a treat.

The London version starred energetic Christie Prades, formerly featured on In the Heights and West Side Story, as Gloria, and I lost count of the times she changed costumes.

Emilio was played by George Ioannides, who has appeared in Annie and Mamma Mia! plus An Officer and a Gentleman, as Emilio Estefan, and Madalena Alberto formerly with Evita, Cats and Les Misérables, as Gloria’s moody and sometimes bitter mother.

There is humour and the set switching is slick, but the show does drag on occasions, however the orchestra, under the direction of Clay Ostwald, inject real energy and vibrancy to the show. Take a bow.