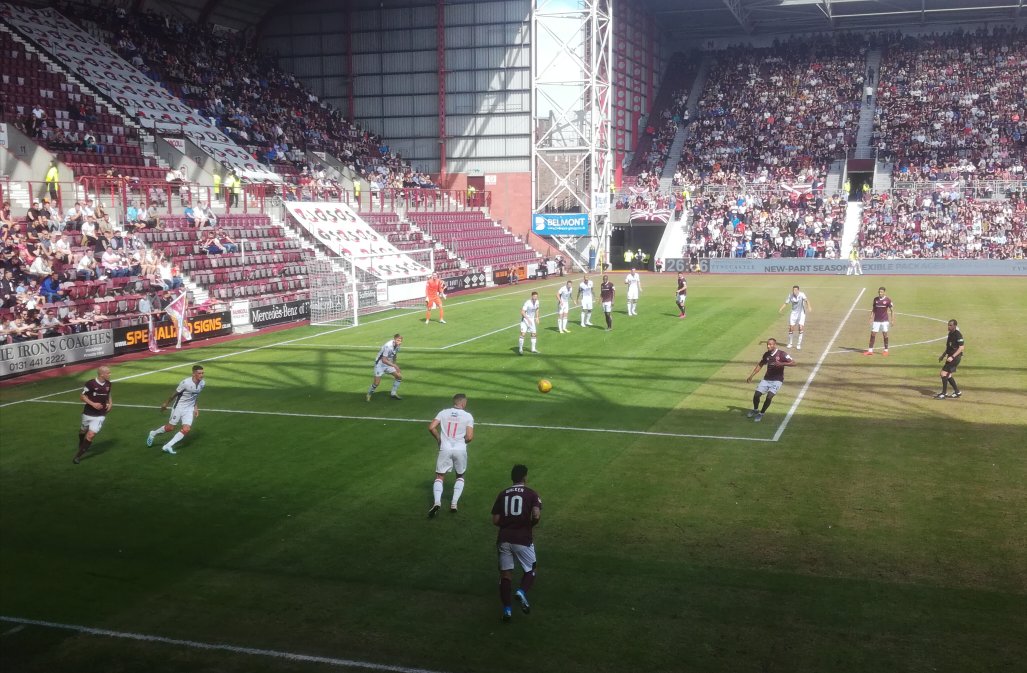 The biggest arts festival in the world is in full flow in Edinburgh in August and the performance at Tynecastle Park on Saturday, certainly from the home side’s stance, was classified as a comedy of errors.

Hearts huffed and puffed and never looked like breaking down a determined Ross County side who, in all honesty, should have headed back to Dingwall with all three points. The Staggies created the better scoring opportunities, none better than the late penalty miss by Graham which struck the post.

The weather forecast was gloomy for the latter part of Saturday, but the sun shone on the Tynecastle pitch, half of which was looking threadbare following last Friday’s Festival concert which was staged on the £1m hybrid playing surface.

However, there was little to get excited about for the home fans in the ensuing 90 minutes.

Conor Washington brought out a save from County keeper Laidlaw before the visitors almost opened the scoring when a stinging volley from Vigurs was brilliantly saved by Hearts keeper Bobby Zlamal.

Mullin then fired over for the Highlanders as the home support grew increasingly impatient at the lack of any coherent play from those in maroon.

Washington had another half chance just before the interval, but his effort was blocked before Stewart really should have given County the lead, but he pulled his header wide.

The second half followed the same dismal pattern as the first – Hearts utterly lacking in ideas while Ross County looked dangerous on the counterattack. Gardyne hit the crossbar at the start of the second half before Stewart’s low effort was saved not all together convincingly by Zlamal.

Stewart then missed a glorious chance for County with 20 minutes left when he latched on to a through ball which flat-footed the Hearts defence, but he blazed his shot on goal into the Roseburn Stand and the chance was gone.

The visitors missed an even better chance eight minutes from time when Aidan White tripped Fraser inside the penalty box. Graham took the resultant penalty kick but struck Zlamal’s right hand post and the best chance of the game had been spurned.

The game ended goalless and the chorus of boos from the home support – not only at the end of the game but during it – told its own story. The Hearts players have no idea what to do in the final third of the pitch. Their play is one dimensional and there is no Plan B for when things need changing. The more bitter of the Hearts support may suggest there isn’t even a Plan A.

At least Craig Levein gave an honest assessment at the end of the game. He told the official Hearts website:

“It was hard work today. We didn’t really get going at all. Ross County did very well and the longer we went on without dominating, the more we just played safe and it resulted in us continually playing it long.

“I understand it, if you’re not confident then the ball goes forward quicker, but it doesn’t help us.”

On Steven Naismith’s latest injury, the manager said, “Steven was feeling his hamstring, he came off before there was any damage, so I don’t know if he’ll be fine for next week, but it was precautionary.”

Hearts struggle when Naismith isn’t on the field. Today they struggled even with his presence. The state of the pitch, the state of the team and the state of Craig Levein’s predictable tactics all contributed to the angst clearly demonstrated by the Hearts support.

Owner Ann Budge must surely be aware of the levels of unhappiness among the Maroon Army. As I’ve written on this website before it’s surely time for a change of manager at Tynecastle. If not, the Queen of Hearts may find some of the supporters turning against her as well as the manager.