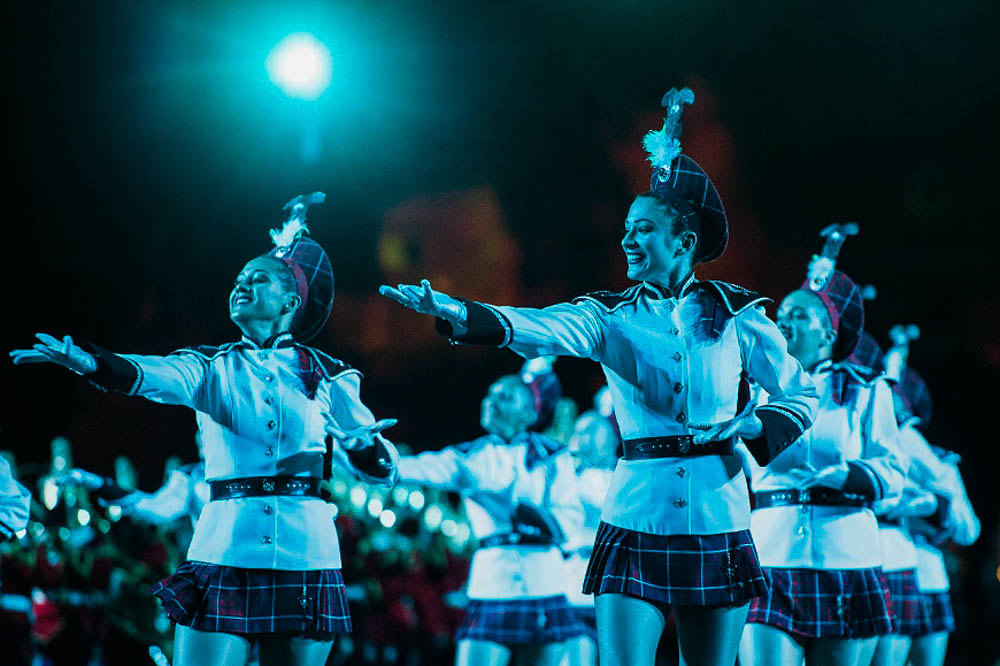 With ten days until Opening Night, The Royal Edinburgh Military Tattoo has confirmed the New Zealand Army Band, The Lochiel Marching Drill Team and The Pipes and Drums of Christchurch City will be in Edinburgh representing New Zealand this August.

Coming together with other international military and cultural contingents for the 2 – 24 August run, the New Zealand Army Band, based at Burnham Military Camp in the South Island of New Zealand, will return to Edinburgh for a sixth season.

In scarlet uniforms with distinctive black ‘lemon-squeezer’ hats and with the Drum Major handling a ‘tewhatewha’ – a long-handled Māori mace – they will draw on everything that is special from their beautiful country. The Band will lend a special flavour to the Tattoo performance with its unique cultural heritage, great music, impeccable choreography, humour and intricate drill manoeuvres not usually associated with military musicians.

The Band was formed in 1964 as a traditional brass band for state and ceremonial occasions but has evolved into one of the world’s most exciting and diverse musical groups. In 1970, the Band incorporated a rhythm and vocals section to broaden its repertoire to include swing, jazz, pop and rock.

The experienced Kiwi performers not only perform around the world and were also a crowd-pleaser when they joined the Tattoo at hugely successful shows in New Zealand and Australia in 2000, 2005, 2010 and 2016.

The legendary Lochiel Marching Drill Team also makes a glorious return to Edinburgh Castle’s Esplanade for an eighth season – they first appeared in 1978. This remarkable team of young women are renowned for their exceptional talent in precision marching. Each movement is mathematically calculated to the standard marching beat (of 116 beats per minute).

This year, the troupe will pay a special tribute to their late coach, Colleen Pobar, who passed away at the beginning of the year after leading them for more than 50 years. Under her leadership, the group has become New Zealand’s number one marching drill team.

Joining these acts are the magnificent Pipes and Drums of Christchurch City. From New Zealand’s third most populous city and the principal centre for the South Island, The Band will join the 250-strong Massed Pipes and Drums. The Band, formed in 2009 and while proudly wearing the McKenzie tartan, will be led by Pipe Major Robin Loomes and Drum Major Brian Coutts.

This year, The Royal Edinburgh Military Tattoo is celebrating the Kaleidoscope – the Scottish optical instrument first patented by Sir David Brewster in 1817. The show will explore the glorious symmetries and colours of the Armed Forces. The cast will include nearly 1200 international performers.

Brigadier David Allfrey MBE, Chief Executive and Producer at the Tattoo, said: “We are thrilled to be joined by three stunning acts from New Zealand. Each is remarkable in their own way and it is a rare treat to have all of them in Edinburgh at the same time.

“The New Zealand Army Band have cut a unique path for themselves in bringing together their pride in New Zealand’s Māori heritage, great music and military ethos.”

“The Lochiel Marching Drill Team have been part of our international family for many years and this will be a challenging time for them, appearing in Edinburgh for the first time without their long-time coach and mentor, Colleen Pobar.

“We have written a special piece of music for them. We are so pleased they are with us this year. And finally, the icing on our cake, The Pipes and Drums from Christchurch City.”

“These friendships with our faraway cousins are ever more important and whenever we come together it serves to remind us that while we have developed very distinctly, we also have so much in common.”

The Royal Edinburgh Military Tattoo celebrates its 69th show this year, after launching in 1950. Tickets for the event are on sale with the full programme of performers to be revealed in due course.