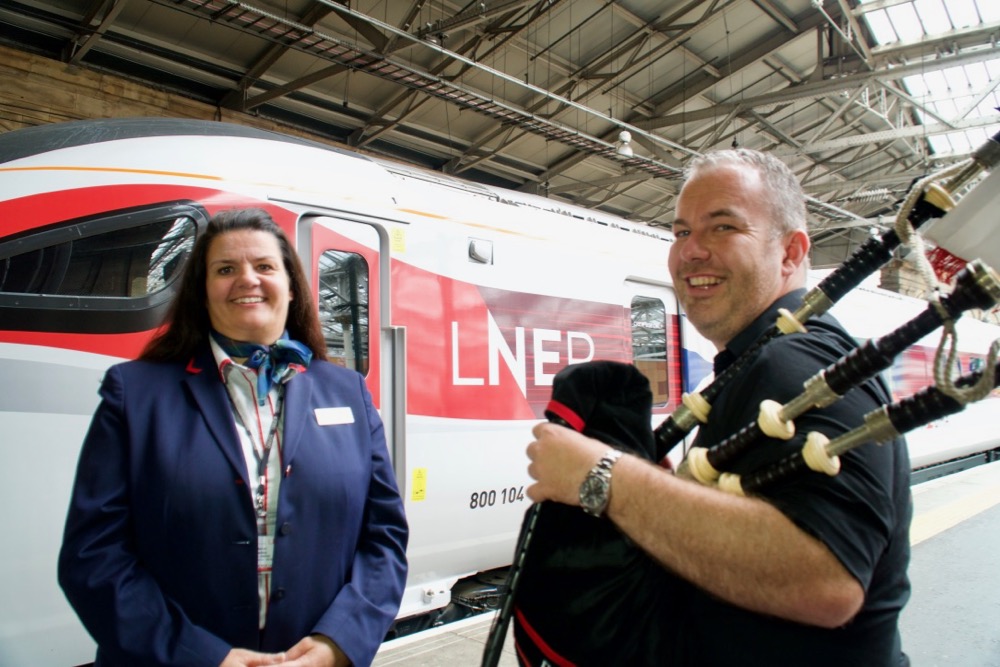 LNER introduced us all to the new Azuma train this morning at Waverley with a tune or two from the Red Hot Chilli Pipers and the unveiling of a new tartan.

From tomorrow, 1 August 2019, this new look service will bring rail travel on the east coast into the 21st century. The inaugural LNER Azuma service will depart Edinburgh Waverley on 1 August 2019 at 05:40 and marks the first time new trains have been introduced along the 336-mile route connecting the Scottish and English capital cities in more than 30 years.

The original Flying Scotsman train entered passenger service in 1862 when the locomotive was introduced between Edinburgh and London. Throughout its 157-year history the service has endured as a symbol of speed and excellence on the East Coast route.

The idea is to replace the existing fleet with 65 new Azuma trains built by Hitachi in the North East of England, cutting journey times by 20 minutes to just four hours from Edinburgh to London. The promise of a new timetable from 2021 means that journey times should be even more reliable.

The interior in First Class is kitted out in maroon and pale grey with more single seats with bigger tables than they had before. In Standard the seats are a nice red and look roomy enough too. They have been designed to ‘maximise comfort and support posture’. The menu for those in First Class will include a complimentary two-course meal freshly prepared in the onboard kitchen. And elsewhere there is a café and a trolley service. And at each seat there is an electric plug as well as USB sockets (although we are not sure that is the same arrangement in Standard Class) and window blinds to make it a more pleasurable work environment when using a computer.

For those passengers who require some assistance there are priority seats and universal access toilets.

The signage on the outside and inside of the train is clearer with information scfreens and audio announcements that you can actually hear.

My own experience was that this train seemed quieter, and took no time at all to get to Berwick and back again with driver Sharon at the controls. The acceleration is designed to be quicker on the diesel electric hybrid. Sharon is originally from Chesser and has been driving trains for LNER for about six years.

The new tartan has been designed by Ken MacDonald from Paisley and reflects the regions it serves with the colours chosen.

David Horne LNER Managing Director said : “This week marks the beginning in a new age of rail travel in Britain with our Azuma trains being launched on our Edinburgh route. Azuma trains by LNER offer more seats better WiFi more reliability and will ultimately offer faster journey times between the two cities. The Azuma experience is the proud tradition of LNER setting new standards in rail travel. From extra legroom improved accessibility and more environmentally friendly our new trains are truly transformational.”

I met some local politicians enjoying the trip:

I spoke to Mr Horne just as the train was pulling back into Waverley after a quick journey to Berwick during which we sampled some of the delights from the kitchen.

Nice wee trip to Berwick and back on the @LNER new train which will be in use from tomorrow and spoke to @DavidHorne just as we pulled back in to Waverley! #Azuma pic.twitter.com/7qPCfWnhEJ

The new Azuma trains are part of the Government’s £5.7billion Intercity Express Programme which will modernise LNER services on the key intercity route used by more than 22 million people each year.