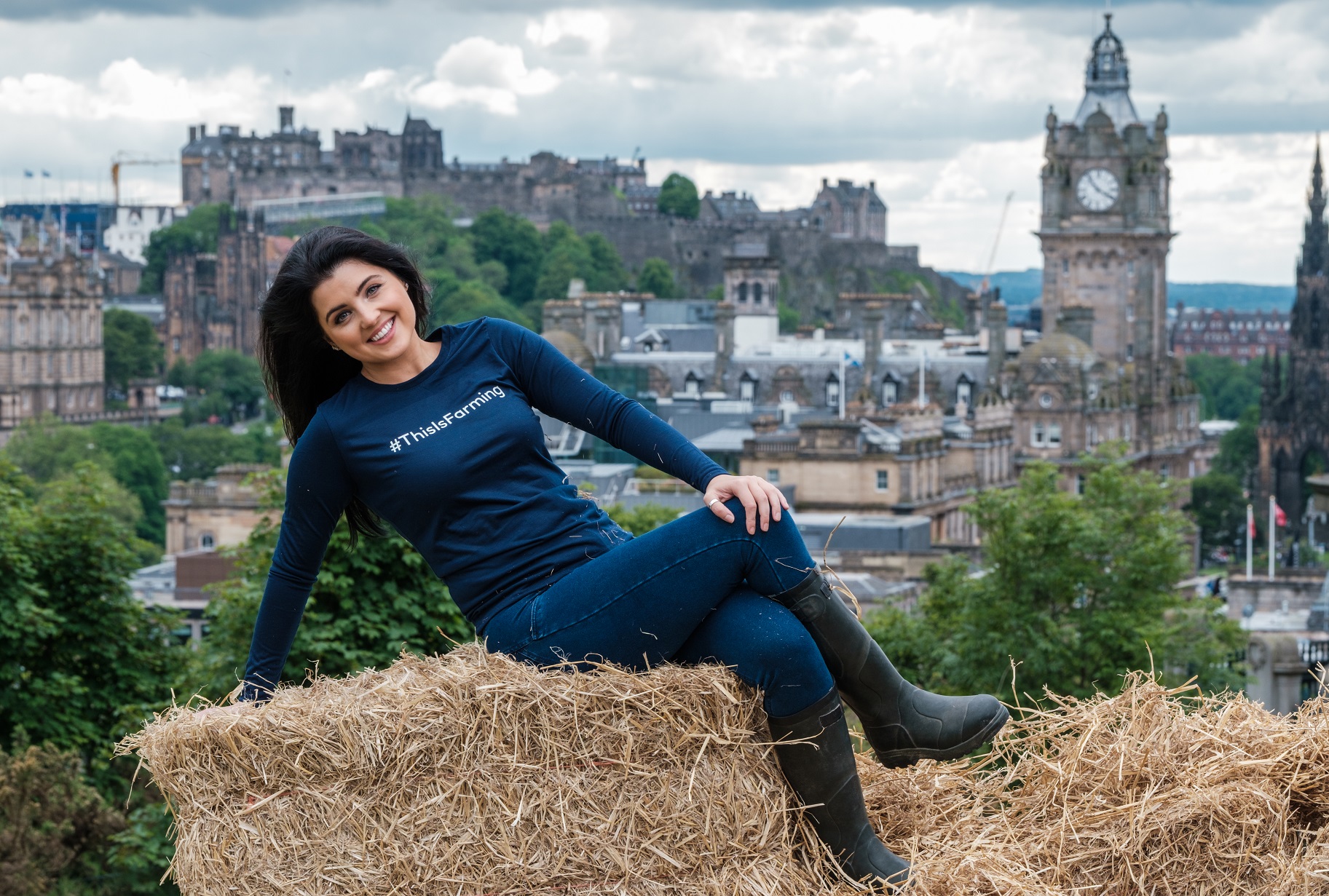 The Royal Highland Show returns to Edinburgh on Thursday and Scottish TV presenter and farming ambassador Storm Huntley scaled the Capital’s Calton Hill to flag the impact women make to the industry.

The annual event, which has been supported by Royal Bank of Scotland since 1981, is one of the focal points of the Scottish farming industry calendar, showcasing the best the sector has to offer. On the eve of this year’s show, Storm offered her support to the bank’s aim of making entry to agriculture easier for new entrants and to tackle gender stereotypes surrounding farming in Scotland.

Figures published by Scottish Government commissioned research to establish a baseline on women in farming and the agricultural sector demonstrate that women are vastly under-represented and face significant barriers to entry and progression within the farming and agriculture sector in Scotland.

Key findings from the research include:

·
1 in 3 Scottish farm operators are women

The research also highlights that ‘lack of time’ (71.8%) is a major barrier to women obtaining more senior roles within farming alongside a lack of access to training and the need to prioritise children (53.9%). The research also suggests that women in family businesses outside of agriculture face far fewer barriers to business involvement and leadership.

This weekend’s Royal Highland Show represents the final show before the Women in Agriculture Taskforce is set to publish its final report in Autumn 2019.

As a reminder of women’s impact to the sector, Storm took banners flagging some of the original findings to one of Edinburgh’s most iconic locations.

Ahead of this year’s Royal Highland Show, Royal Bank of Scotland has launched #ThisIsFarming, a campaign to raise awareness of the challenges faced by women in agriculture and the support available from the Royal Bank.

Commenting, Storm Huntley, TV presenter and women in agriculture ambassador said: “Improving the opportunities for women in all industries is really important to
me. Through presenting ‘Down on the Farm’ for the BBC I met many
fantastic female farmers but it was clear that overall this industry was still
very male dominated. It would be great to break down the stereotypes that still
exist in agriculture and encourage the next generation of farmers to grow,
develop and flourish.”

Royal Bank of Scotland is a key supporter of Scottish farming. The partner of the SAYFC’s Young Farmer of the Year programme, the bank is also involved in the Women in Agriculture Scotland Group, offering mentors and specialist support to help equip women with the tools they need to build a successful career. The Royal Bank Women in Business programme has 400 accredited Women in Business specialists providing support for women working across all industries with an understanding of the unique issues and pressures female-led firms often face.

Joyce Campbell, co-chair of the Women in Agriculture Taskforce said: “It is vital that women in agriculture are given access to the same development opportunities as men in order to create a more highly skilled workforce and unlock talent which drives the industry forward.

“Increasing the number of women in senior roles in the industry is another core area we must focus on as we look to create positive role models in the industry for future generations to aspire towards”.

Backing the campaign for equality in agriculture, Penny Montgomerie, CEO at SAYFC said: “Modern farming has moved on to a point where the traditional stereotypes are no longer applicable to the industry. It is important that we continue to strive for equality in the agricultural industry and create an environment in which the next generation of farmers can flourish.

“Agriculture is a key component of the Scottish economy and it is important to attract the best talent possible into the sector. Increasing access to training, finance, support networks and business advice is key to achieving this”.

Roddy McLean, Head of Agriculture at Royal Bank of Scotland said: “We’re proud of
our longstanding commitment to agriculture in Scotland. Over the course of our
near 40-year sponsorship of the Royal Highland Show we have tackled a range of issues faced by the agricultural community and our latest campaign continues this
tradition.

“Women are vastly under-represented in agricultural sector, but we hope that by utilising our dedicated women in business and agriculture resources, we can contribute towards encouraging more women into farming as well as helping those already within the industry to advance their roles.”

Support for the agricultural industry offered by the bank includes:

Agriculture Relationship Managers: Royal Bank has 27 qualified advisers working as agricultural relationship managers able to understand the unique needs of land-based businesses. One third of these are women.

Women in Agriculture: Since 2017, Royal Bank of Scotland has been heavily involved in the Women in Agriculture group, providing mentors and specialist support to help equip women with the tools they need to counter the barriers they face in their careers.

Boost and Business Growth Enablers: Boost is Royal Bank’s commitment to help customers beyond just finance. Delivered through our locally based Business Growth Enablers (BGE’s) who offer one-on-one support and guidance, run business-related events on topics like social media, recruitment, cashflow management and help small businesses to create connections and partnerships in their local area. RBS is the only bank to offer BGE’s.