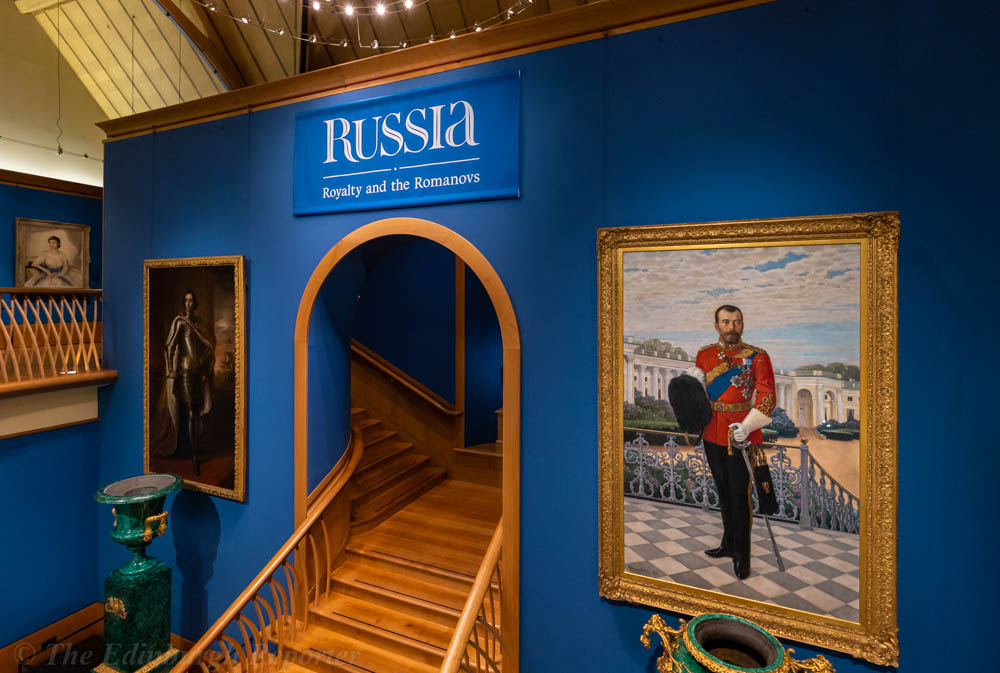 ‘…how deeply we all feel with you the terrible loss you have sustained. My thoughts are much with you and dear Aunt Alice…she was remarkably kind and touching towards me since the first time I ever saw her, when I came to England for George’s and Mary’s wedding.’

Nicholas went on to express the fervent hope that relations between the two countries could continue to flourish (he’d conveniently forgotten about the Crimean War.)  It is the letter of a nephew to his uncle, but it is also the letter of one head of state to another. The connection between the royal families of Russia and Great Britain had begun over 200 years earlier, when Peter the Great made a Grand Embassy, or fact-finding mission, to Europe; the familial and diplomatic links begun then continue to this day. At The Queen’s Gallery, Palace of Holyroodhouse, a new exhibition, Russia, Royalty and the Romanovs, brings together portraits, gifts and mementos exchanged between the two dynasties; some are political statements but many are touching personal tokens.

In 1698, Tsar Peter I had been the first Russian monarch to visit Britain, and he had come largely to find out more about navies and cities. He wanted Russia to have the best of both, just as he wanted the Russian nobility to be improved by fresh blood.  A silver seal box (1749) contains the imperial court’s wax seal used to create new titles for this very purpose. As a parting gift, Peter gave William III a portrait of himself painted by Sir Godfrey Kneller; he’s all dressed up in a coat of armour and a golden cloak, with his crown on a cushion behind him. Through the window can be seen the ships he has come to study.

Many of the portraits in this exhibition send similar messages; Vigilius Eriksen’s Catherine II (1729-96) Empress of Russia – a present to George III – is almost 3m high, and although Catherine is said to have been quite short, her cloak and voluminous dress make her look enormous. Another painter, Elisabeth Vigee Le Brun, said ‘on the days when she made her public appearances, with her head held high, her eagle-like stare and a countenance accustomed to command, all this gave her such an air of majesty that to me she might have been Queen of the World’. Eriksen has captured this confidence; Catherine looks well pleased with life.

Other paintings are less formal and more interesting; in 1863 Prince Albert (later Edward VII) married Princess Alexandra of Denmark, and in 1866, Alexandra’s sister married the son of Emperor Alexandra II; the three royal houses were now inseparably linked. Laurits Regner Tuxen’s The Family of King Christian IX and Queen Louise of Denmark (1885) depicts members of the British, Russian, Greek and Danish royal families meeting to celebrate Queen Louise’s 65th birthday. It’s a lovely, informal scene; a toddler crawls on the carpet, two small children lounge on a sofa, the Duchess of Cumberland holds a baby on her hip – even Albert has his two dogs at his feet. Queen Victoria liked the picture so much she commissioned Tuxen to do one of her own family to commemorate her Golden Jubilee in 1887; it’s another beautifully relaxed affair, full of children (Princess Alice is especially cherubic and smiley in her sweet blue dress and pink sash), dogs and gorgeous frocks.

Nicholas Chevalier’s painting of The Marriage of Prince Alfred, Duke of Edinburgh 23 January 1874 is another huge piece dominated by the magnificent cupola of the Cathedral of the Winter Palace at St Petersburg; the couple hold candles as they stand before the Archbishop, but the real illumination comes from the sun, shining on the snow falling outside the window. More charming is the little watercolour Chevalier made to explain the Greek Orthodox ceremony to Alfred’s mother, Queen Victoria; he has attached little cut-outs marked ‘1st part of ceremony’ and ‘3rd part of ceremony’. In her diary, the Queen wrote ‘Affie…sent me 2 very clever little sketches …of the 2 marriages’ (the couple also had an Anglican service on the same day.)

The stars of this exhibition are, however, not paintings but objets d’art. From 1885 the Russian jeweller Fabergé made fabulous Easter eggs for Tsar Alexander III’s wife Maria Fyodorovna; his son Tsar Nicholas II asked Fabergé to continue to make them, both for his widowed mother and his own wife, Alexandra. The eggs all contained a surprise. The Mosaic Egg shown in this exhibition was purchased from a London shop by George V in 1933; he paid £250 for it. The ‘shell’ is encrusted with tiny precious stones to form a floral motif. This egg’s surprise is a particularly poignant one, a miniature frame containing relief profiles of Nicholas and Alexandra’s five children. The egg was made in 1914; four years later all of children were dead, asassinated with their parents at Yekaterinburg in the October Revolution.

The contents of another egg proved a surprise in more ways than one for Caroline de Guitaut, joint curator with Stephen Patterson of this exhibition. In 2015 Caroline found a tiny automaton elephant made of ivory in a cabinet in Buckingham Palace. The elephant was the missing surprise in Fabergé’s Diamond Trellis egg.  Although the egg itself is privately owned, the elephant had been ‘missing’ for many years; it had in fact been another of George V’s bargain buys. The Order of the Elephant is Denmark’s highest ranking order of chivalry, and this delightful surprise – Fabergé’s only known work in ivory – was made especially for Maria to remind her of her homeland.

Fabergé’s Moscow and St Petersburg workshops didn’t only make eggs: a fine set of crimson lead crystal decanters with silver dolphin spouts and handles (purchased by HRH The Queen’s late mother), brooches, fans, a translucent chalcedony water buffalo and an agate koala bear (the latter two again purchased by King George V, though this time from Fabergé’s London branch) are also displayed, together with a stunning dark blue enamelled gold cigarette case. This beautiful Art Deco piece is encircled by a diamond-set snake, a symbol of everlasting love. It was given to Edward VII by his mistress Mrs George Keppel, and given back to Mrs Keppel by Edward’s widow, Queen Alexandra. Mrs Keppel later gave it to Queen Mary.

An unusual green malachite paperweight by the Peterhof Lapidary Workshops and a finely detailed silver salt cellar by Karl Albrecht also impress, while a dessert dish is the product of the Francis Gardner factory. Gardner set up his porcelain works in a small village in the Dmitrov district of Moscow Province in 1766. The factory is still open and remains (as it was in the 18th century) Russia’s second largest producer of crockery. Gardner had come to St Petersburg with his father and brothers to trade in timber; by 1750 he was running a financial firm in Moscow. The Tsarina had already sent spies to Meissen to try to discover the highly prized secret of making porcelain, and although a Russian chemist had by now finally developed a recipe and started the Imperial Factory, Gardner knew a business opportunity when he saw one. Moscow needed china; he offered to start a new factory at his own expense ‘for the good of the Russian Empire.’  The factory was so successful that it was soon supplying Catherine the Great. It remained in the Gardner family until 1892; ultimately it ran out of money and was sold, then nationalised in 1917, but a consortium bought it back in 1991 and it is still in business today. The Gardner family never left Russia and its descendants remain in the area.

Peasant crafts were revived in Russia from the 1870s; an intricately decorated table, chair and mirror bearing the coat of arms of Alfred, Duke of Edinburgh and his wife Maria Alexandrovna are so rare that no similar example is known to exist in Russia. Made of wood and straw-veneered, the furniture’s polychrome decoration includes greens, blacks, reds and yellows and is quite unlike anything else in this exhibition.

Photographs also provide a fascinating glimpse of life in Russia. James Mack, a Corporal of the Royal Engineers, was chosen to document Queen Victoria’s special diplomatic mission to the coronation of Alexander II in 1856. The Queen was delighted with the 19 photos he brought back; those displayed in this exhibition include Mujiks (serfs) and a cityscape of Moscow showing the Kremlin. An Edinburgh-born photographer and Russian resident William Carrick (the son of another timber merchant) was one of the first to focus on pictures of the countryside and ordinary people; Itinerant musicians with bears, Finland (then part of Russia) is particularly interesting. Another English photographer, but this time one who stayed firmly in the Isle of Wight, took photos of various members of the British and Russian royal families in 1909, marking the very last visit of the Russian imperial family to Britain. Most remarkable about Arthur William Debenham’s portraits is the familial likeness between the two families; Emperor Nicholas II and the Prince of Wales, standing together, could be twins.

Edward VII’s daughter Princess Victoria compiled her own album of photos from a state visit to Reval (Tallinn) in 1908 (not all of the photos were her own, some having been taken by her mother and others by the Russian court photographer.) To save space she made them into a collage. Kings, Queens, Dukes, Duchesses, Counts, and of course Tsar Nicholas himself (King Edward’s nephew – not for nothing was Edward called ‘the Uncle of Europe’) all feature in this wonderful record of one of the last Edwardian summers.

The exhibition ends with two portraits by Savely Sorine; the first of the then Duchess of York (HRH the Queen’s mother), the second of the Queen herself when she was still Princess Elizabeth. The portraits are hung either side of an evocative work by Igor Grabar; A Winter’s Day (1941) is a deceptively simple painting of bare birch trees in a snow-covered field. This quintessentially Russian scene encapsulates the poignancy that permeates so much of this fascinating exhibition; a few months later German tanks entered Russia, and once again the world changed, and much was lost.

Russia, Royalty and the Romanovs is at The Queen’s Gallery. Palace of Holyroodhouse, Edinburgh until 3 November 2019. For opening times and ticket prices visit https://www.rct.uk/whatson/event/914183/Russia,-Royalty-&-the-Romanovs

With thanks to Caroline de Guitaut, Stephen Patterson and Katie Buckhalter, all Royal Collections Trust. All images (c) John Preece.