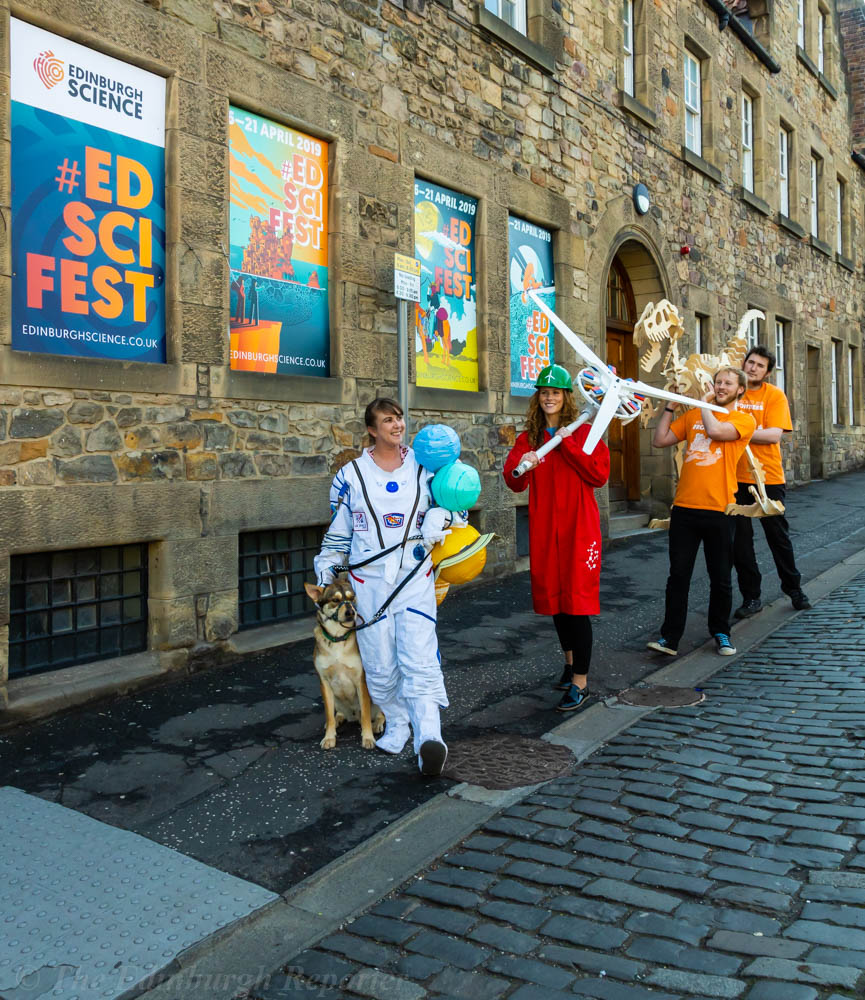 The world’s first, and Europe’s biggest, science festival, the Edinburgh Science Festival – powered by EDF Energy – kicks off its 31st edition on Saturday, 6 April! This year’s programme, inspired by the 50th anniversary of Moon landing, is themed around Frontiers as it explores the uncharted territories of our life on Earth and beyond.

The Festival lasts until 21 April and presents over 270 events across 31 venues in and around Edinburgh for people of all ages! Edinburgh University’s Pleasance becomes the new Festival Hub, hosting a variety of science shows, hands-on events, debates, discussions and workshops.

Amanda Tyndall, Creative and Festival Director at Edinburgh Science Festival said: “At the heart of all science lies an unquenchable curiosity; a deep urge to explore and explain the unknown and to push the Frontiers of our knowledge of ourselves, the world around us and our place in the Universe.

“This year’s Festival celebrate the spirit of adventure and enquiry that drives science, with a pioneering programme of events for all ages, exploring the Frontiers of everything from the depths of the ocean to the farthest reaches of space to the working of the brain.’’

Minister for Europe, Migration and International Development Ben Macpherson spoke at the launch event: “The Edinburgh Science Festival is hugely important for promoting interest in science and I am pleased to celebrate its ongoing success.

“I am delighted that this year’s programme has benefitted from the Scottish Government’s EXPO fund, with £80,000 going towards a theatrical production of Melody and Sam: Record Breakers – an excellent example of what can be achieved when creativity and science come together.

“I am also pleased to announce a further £130,000 EXPO award for Go Digital, a 2020 programme which will explore how the Science Festival can use existing and emerging digital and creative technologies to enhance and transform the experience of their audiences, young and old.”

Councillor Donald Wilson, Culture and Communities Convener said: “Every year the Edinburgh Science Festival transforms the city into a celebration of science and technology and this year we will all be able to explore new frontiers.

“The unique mix of art, design, photography and interactive exhibits included in the festival programme make science and the concepts being explored more accessible and entertaining. For the next two weeks, you’ll be able to find fascinating talks with Professors, pioneers and experiments to entertain and educate all ages. Taking place across the capital, there really is something for everyone, you can learn about ongoing work to tackle climate change or the latest developments in engineering, healthcare and digital worlds.

“Over the course of the Festival our City Art Centre will once again turn into a playground of family-friendly events with 5 floors of hands-on science for children as young as three. It’s a perfect day out for the family in the Easter Holidays with six new workshops around energy, colour, animals and space exploration.”

Festival highlights include A Human Touch, a major free open-air photography exhibition exploring human influence on Earth opened on 20 March in front of the Scottish Parliament. Science in the Spotlight returns with another world premiere theatre production: Melody and Sam: Record Breakers, a tender and hilarious story of friendship and breaking world records, developed with support from Creative Scotland through the Scottish Government’s Festivals Expo Fund.

Also in the children’s programme, five floors of hands-on science at City Art Centre is back with the favourites such as Blood Bar and ER Surgery alongside five new workshops and interactive activities. National Museum of Scotland’s Grand Gallery will host Build and Break inviting young visitors. to BUILD IT – build magical structures with super-sized construction blocks – and then head over to BREAK IT to be set loose on a huge pile of discarded electronics with a screw driver and a pair of pliers (under adult supervision!).

Experimentarium takes over The Pleasance with some weird, wonderful and cutting-edge science for children who will put the Moon under a microscope and learn about technologies aiding dogs with important jobs!

Some of the high-profile speakers at the Festival include Edinburgh Medal-awardee Christiana Figueres who was the driving force behind the Paris talk agreement, Prof Sir Ian Wilmut who led the team of scientists responsible for cloning Dolly the Sheep in 1996, explorer Benedict Allen and comedian Robin Icke.

Prof Dame Anne Glover and Prof Dame Jocelyn Bell Burnell will be talking about their personal experiences of being women in science, Astronomer Royal Lord Martin Rees exploring the themes of his recent book, On the Future: Prospects for Humanity, Prof Richard Wiseman in conversation with comedian and broadcaster Helen Keen investigates the powerful life lessons behind humanity’s greatest achievement, landing on the Moon.

And Prof Jim Al-Khalili shares an insight into his first foray into fiction with his recent book, Sunfall. Prof Gina Rippon discussed the topic of her latest book, The Gendered Brain as is Prof Angela Gallop who has just realised a book called When the Dogs Don’t Bark: Forensic Science at Work.

To browse all Edinburgh Science Festival events, visit the website on www.sciencefestival.co.uk.