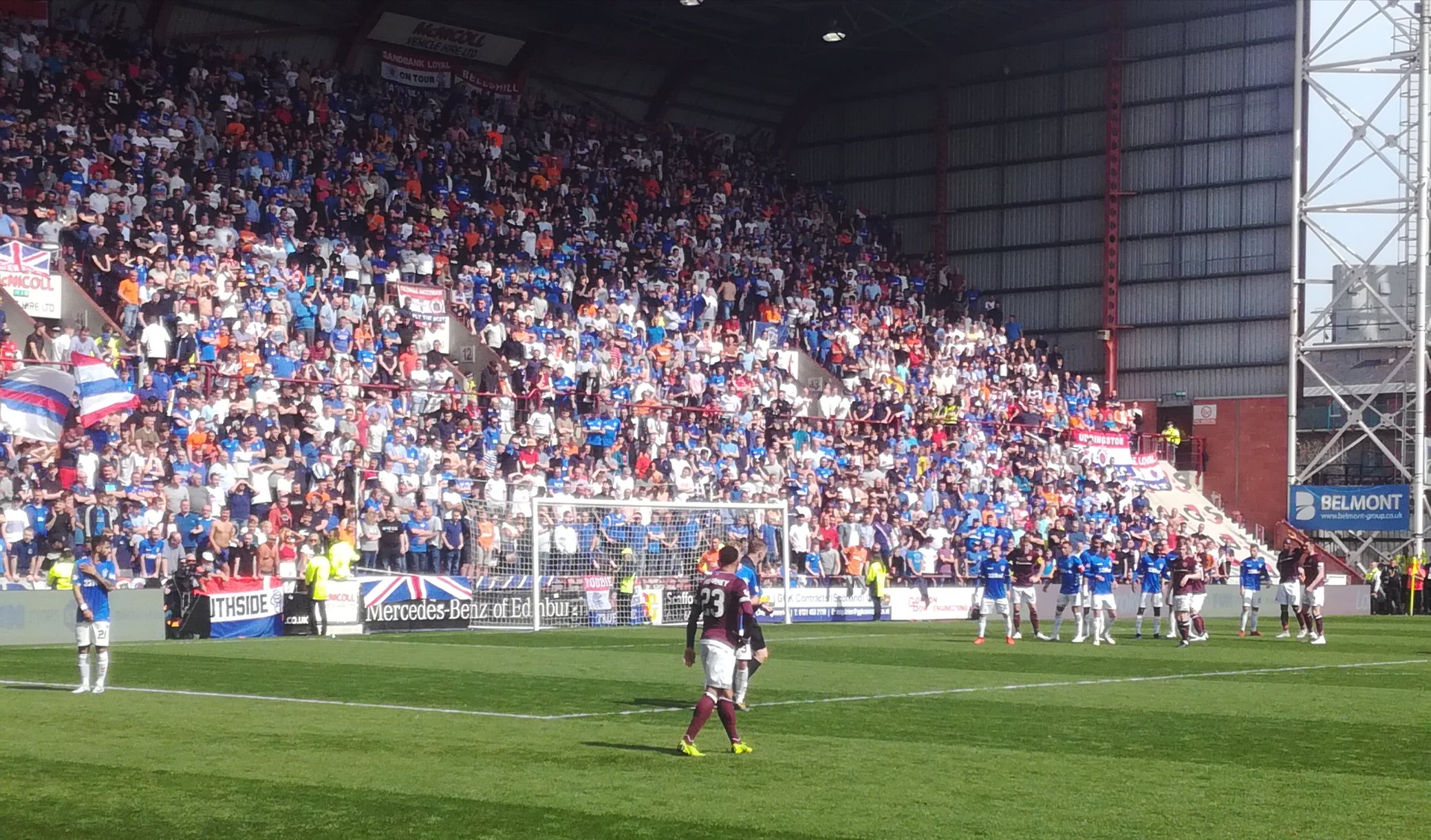 A week ago, Hearts fans were in buoyant mood after seeing their side reach the William Hill Scottish Cup final following a 3-0 semi-final win over Inverness Caledonian Thistle at Hampden. Those who felt that victory papered over some of the cracks of this present Hearts team were nodding ‘I told you so’ at Tynecastle seven days later as Hearts meekly surrendered to a Rangers team clinging on to the wreckage of hopes of a league title.

The game kicked off at high noon amid high temperatures as Gorgie, like the rest of the country, bathed in warm spring sunshine. It was shirt-sleeve weather for the Maroon Army but they were soon folding their arms in disgust after yet another uninspiring performance from their side.

This season has been a story of injury woe for Hearts. With Steven Naismith, Ben Garuccio and Demetri Mitchell still on the long-term injury list, there was further bad news for the maroons yesterday with the news that Callumn Morrison and Aidan Keena have also been ruled out for the rest of this season. Peter Haring was then ruled out for at least a fortnight due to another injury. As if this wasn’t enough, Hearts manager Craig Levein was forced into a last-minute change against Rangers when Sean Clare became unwell during the warm up and was unable to proceed. Craig Wighton took his place.

With part of the Wheatfield Stand closed due to misbehaviour by a section of the Hearts support this season, the atmosphere among the home crowd seemed muted. Their mood wasn’t helped as they watched Rangers take a stranglehold of the game straight from kick off. Candeias fired a shot wide from 20 yards out as the visitors threatened every time they broke forward.

Hearts captain Christophe Berra headed a free-kick over the bar but any hope this might spark the home side into action were dashed when Rangers deservedly took the lead in the 15th minute. Craig Wighton dallied in midfield allowing Kamara to feed Defoe and the experienced English international buried his shot past keeper Bobby Zlamal. There was an inevitability about the visitors going in front.

Uche Ikpeazu then had a chance inside the Rangers penalty box but ballooned his shot into the Roseburn Stand much to the delight of the visiting support housed there. On the plus side it put a temporary cessation to the customary sectarian songs emanating from the Rangers support. I await Ann Budge making a statement condemning this behaviour…

Craig Wighton then had a chance but he screwed his shot wide of the target. Again, there was an inevitability about the outcome of the former Dundee striker’s finish. As there was when Rangers doubled their lead in the 36th minute when Oliver Bozanic mimicked Wighton’s dithering in the middle of the field allowing Candeias to set up Jack who stroked the ball past Zlamal.

As at half-time at the national stadium last week, boos greeted the Hearts players as they trooped off the field at the end of a lacklustre forty-five minutes.

Those boos turned to anger three minutes into the second half when Rangers killed the game with a third goal. Tavernier crossed to the far post and the unmarked Katic slid in to score. Cue an exodus of many Hearts supporters who had seen enough.

Those who left missed Hearts consolation goal fifteen minutes from the end when substitute Steven MacLean headed home Jake Mulraney’s cross to provide an all too brief moment of cheer for the home support.

Rangers should have added a fourth goal in injury time when Arfield produced a fine save from Bobby Zlamal.

Like the disgruntled Hearts support, manager Craig Levein wasn’t a happy man after the game. He told the official Hearts website:

“We need to work on our pressing as a team. We set out today to press Rangers high up the field and didn’t get it right.

“It doesn’t help that we shot ourselves in the foot and gave away two silly goals, but the pressing was nowhere near good enough, and I’m not sure if the uncertainty is what caused the two boys to get caught in possession of the ball, but it didn’t work and we gave Rangers two goals.”

“We’ve had chances today and didn’t take them and it’s the same pattern as in previous matches against Rangers which is frustrating, and the press we want to do means you go all in and don’t worry about what’s behind you, and we were too safe and didn’t commit to it,” the gaffer added.

“I don’t think we’ll let the league campaign fizzle out. I know what caused the bad performance in the first half and that’s something we can work on and do something to fix.

“Obviously we gave Rangers chances in the second half, but the press was more effective, and we got more chances.”

These are words Hearts supporters have heard all too often this season. Season tickets are on sale for next season but unless there’s a drastic change in outlook from the Hearts manager – and Ann Budge – sales may well drop substantially.