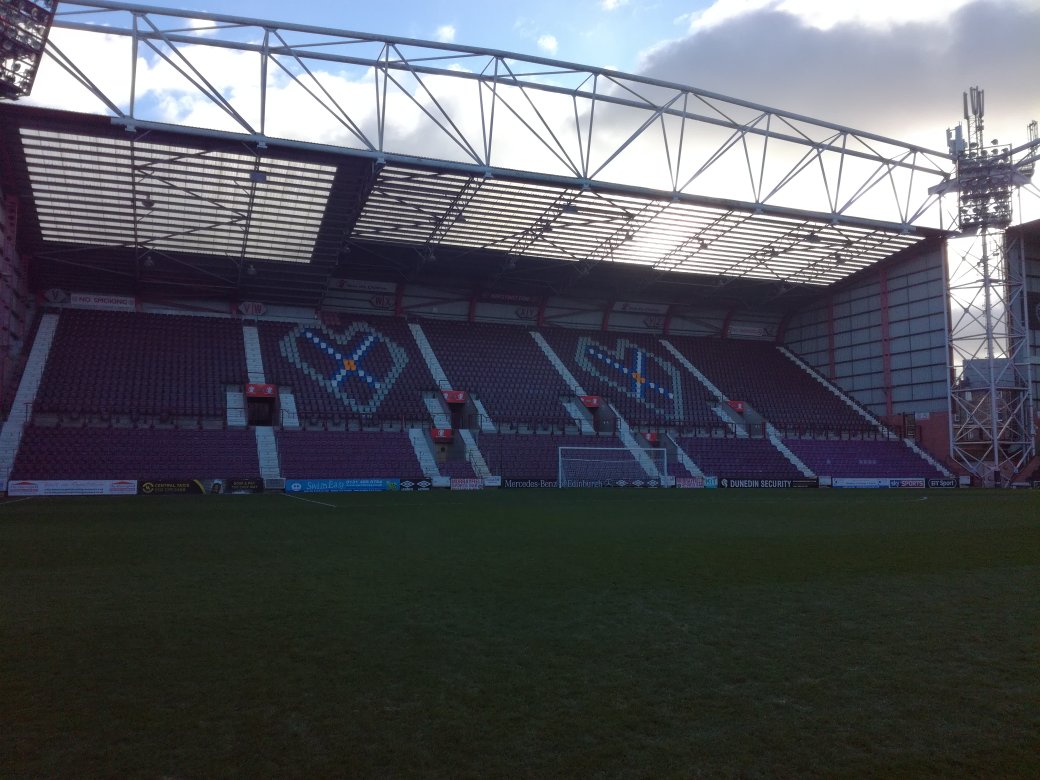 Paul Heckingbottom’s excellent start to his Hibs’ management career continued with a victory over Hearts at Tynecastle following a pulsating 90-minutes this afternoon, a result which sees his team leapfrog their city rivals into fifth place in the table.

Heckingbottom made one change to the starting XI that drew with Kilmarnock in midweek with Darren McGregor replacing Vykintas Slivka. Craig Levein made five changes to his side following the 3-0 defeat at Ibrox.

Despite and the clubs’ warnings, a maroon coloured smoke bomb was thrown from onto the pitch before a ball was kicked and as usual, the game started in frenetic fashion with no quarter asked or given.

The hosts dominated the opening period and Ollie Lee went close with a free-kick which struck the post whilst Jake Mulraney forced a good save from Ofir Marciano.

A goal looked inevitable and it came in the 25th minute when Peter Haring got the better of Mark Milligan to nod home Lee’s well struck corner.

The goal sparked yet another smoke bomb from the home fans but the mood changed three minutes later when Florian Kamberi nodded the ball into the path of Marc McNulty who skipped away from the Hearts’ defender before curling a superb cross into the path of Daryl Horgan who fired home from eight yards out.

Television replays showed that the Scotland striker was marginally offside in the build up but that didn’t upset the supporters and this time it was a green smoke bomb thrown from the Hibs end as the fans celebrated.

At some point a coconut was also thrown onto the pitch, suggesting that the police’s stop and search’ policy hadn’t been as effective as promised.

Just before the break Hearts had a penalty claim rejected after John Souttar nicked the ball off the toes of Stephane Omeonga who then kicked him whilst attempting to clear the ball. Referee Willie Collum had a close view however and waved play on.

As the players left the field, Hibs’ skipper David Gray lay prone on the pitch and required treatment after a clash of heads inside the penalty area.

He reappeared after the interval, to the delight of the travelling support but suffered yet another knock shortly after the restart. Gray kept insisting that he was OK and continued to play on.

Hibs took the lead in the 56th minute with a superb team goal. Kamberi and Stevie Mallan combined to set up Horgan and the Irishman fired the ball into the bottom corner of the net from 20 yards. From then Hibs created chance after chance. McNulty should have made it 3-1 but his header flew inches wide and Hearts’ keeper ‘Bobby’ Zlamal produced an acrobatic save to deny Mallan whose fantastic 40-yard free kick looked goal-bound.

Darren McGregor was shown a yellow card for a late challenge Haring and at the other end, Djoum should have equalised but blasted his shot well over the bar from close range.

In the dying minutes McNulty found himself clean through on goal but Zlamal produced a great save to deny the striker and Milligan set up Omeonga who fired over the bar from close range.

With seconds remaining Hearts won a corner and brought Zlamal up to contest it but the Hibs defence stood tall and the danger was cleared.

A section of the home support made their feeling toward manager Levein at the final whistle as the Hibs’ supporters celebrated the victory.

After the game a dejected Levein told BBC Scotland “We played reasonably well, created enough opportunities to win, but we didn’t. That’s the end of the story

“I rue our poor finishing, not our play – our play was good, our effort was good, our intent to go forward and score was good, but we just didn’t put the ball in the net.

“I think Marc McNulty was offside [for the Hibs equaliser] but I’m not going to stand here and blame other things. Sometimes I do when I feel that’s justified; today we shot ourselves in the foot by not finishing off chances we created and we can’t blame anybody else for that.”

A jubilant Heckingbottom said: One thing I had in my head was celebrating in front of the fans at the end and luckily we’ve been able to do it thanks to some real guts and determination from the players.

“We had to make a tactical change and then we were much better. Regardless, we knew they’d be a threat from set-plays, we knew when we went in front they’d just throw bodies in the box. In terms of height, they were far superior, so we had to win the game a different way.

“Daryl Horgan has worked so hard the time we’ve been here. It’s great he’s got the goals.”