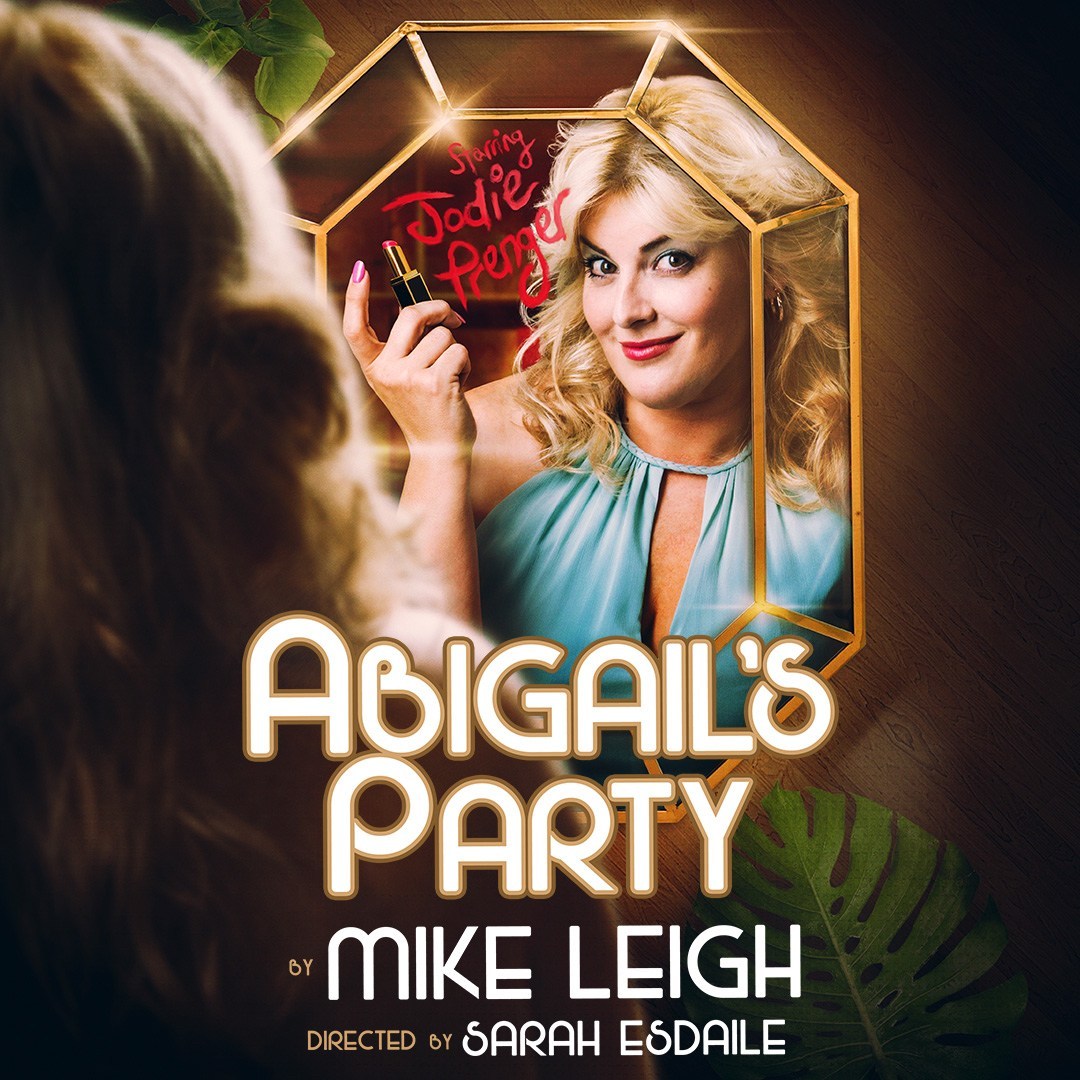 It’s 1977 and Abigail is having a party. She’s 15, into punk music, safety pins and boys. But despite the title of Mike Leigh’s iconic play, we’re not invited to Abigail’s party – in fact the nearest we get to it is the music coming through the wall. For we are next door, at neighbour Beverley’s drinks party. We are with the grown-ups. Or are we?

Beverley (Jodie Prenger) and Laurence (Daniel Casey) feel they have dragged themselves up in the world. They live in one of the larger houses in their suburban Essex street; Beverley – who used to work on a cosmetics counter – is now able to be a lady of leisure, while Laurence sells houses to other aspirational people.

The action takes place entirely in Beverley and Laurence’s living room, a masterpiece of 1970s furnishings; hats off to designer Janet Bird and Props Supervisor Lizzie Frankl, who have not only assembled a treasure trove of period pieces, but have also managed to pitch the style perfectly. I remember the smarter of my parents’ friends having furniture from Habitat, a string of plastic lemons in the kitchen, and a lot of Biba-esque purple. Beverley is not that smart; she has a room divider that doubles as a bar (‘Do you like Pomagne?’), a leatherette pouffe and some rubber plants. She serves cheese and pineapple on sticks. She has a phone, but it’s only a ‘party line’. But what Beverley may lack in style, she more than makes up for in personality; she is full-on, determined to bend everyone to her way of doing things, and utterly convinced that everything about her home is perfect.

Beverley’s guests are a younger couple, Tony (Calum Callaghan) and Angela (Vicky Binns), and Sue (Rose Keegan), mother of the rebellious, unseen Abigail. Tony and Ange have just arrived in the street; their house is one of the smaller ones and they have almost no furniture. Ange wants what the others already have (‘Is that a rotisserie Beverley?’ ‘Have you got fitted carpets Sue?’) The picture on the ‘For Sale’ sign of another local estate agent represents the peak of her aspirations; ‘ The house, the family, the car, the tree – I hoped we’d get a house like that.’

Sue, meanwhile, is a long-time resident and, unlike the others, she is distinctly middle-class with a girls’ private school voice to match. When Laurence asks her if she has seen changes in the neighbourhood, she replies that it has become ‘more cosmopolitan’, and that this is a good thing. Laurence, who is part of the working class insurgency, predictably doesn’t think ‘cosmopolitan’ is good at all.

Alison Steadman was the first actor to play Beverley, a character she created with Mike Leigh in one of his famous improvisational workshops. Although it is hard not to hear Steadman’s voice speaking the many immortal lines, Jodie Prenger makes the role her own, shimmying about the stage in her multicoloured kaftan, forcing drinks and cigarettes on everyone, flirting with the unresponsive Tony and bickering increasingly viciously with her benighted husband. Prenger’s dancing is hilariously funny; if her Beverley were 10 years younger she could have walked straight out of Pan’s People. My only criticism is that, despite growing up in the London suburbs myself, I have never heard anyone speak with quite such an extreme Essex accent.  Beverley is supposed to be a caricature, and as the evening moves along she becomes ever more grotesque, but she would be slightly more convincing if her vowels were just a little less elastic.

Laurence is every bit as aspirational as Beverley in his way, but what he aspires to is Culture. He has Lowry and Van Gogh prints on his walls, an embossed set of Dickens and a James Galway album on his shelves.  While Beverley wants Tony’s body, Laurence is more interested in Sue’s mind – he sees her, someone who has had piano lessons and been to Paris, as his way into the middle classes. It is tempting to see Laurence as a better person than Beverley, but in the end they are both caught up in the struggle to climb an unassailable ladder. They will never enter Sue’s world – as he tells her;

‘Most people drift through life without any particular aims. Life is a fight, people always seem to be in your way.’

Sue is the odd one out in this soiree; not only is she middle class, she’s also single, a mother, and apparently without aspirations. She doesn’t hate her ex, she’s quite happy with her surroundings,  and her only angst seems, understandably to come from worrying about what Abigail is up to. Rose Keegan has nailed the well-bred woman’s accent and behaviour so well that, when Sue suddenly admits that she doesn’t like her husband’s new wife, we feel quite shocked at the indecency of this disclosure. Everything about Sue, from her speech (‘Hello Abigail, it’s Mummy’) to her pinafore dress and her eating something called dinner much later than the others have their tea, screams respectability. She is comfortable in her life despite  (or maybe because of) her lack of partner. She hasn’t had to fight her way up, she was born there; she can afford to be polite.

Vicky Binns’ Angela is by far the most likeable character of the five, at least in this production. She calls a spade a spade, is neither embarrassed by her relatively low social standing nor afraid to admit that she wants more. Optimistic, enthusiastic and equally oblivious to Sue’s poshness and Beverley’s condescension, she ploughs on, telling everyone about Tony’s curry-induced gastroenteritis (‘Have you ever tried pilchard curry? It’s a very economical dish.’), blundering into the history of Sue’s divorce, and banging on and on about the price of their house – something which, of course, Sue would never mention.

Gradually, however, we find out that Angela’s married life is far from easy. Calum Callaghan’s terse, ill-tempered Tony bristles with frustrated hopes and disappointments. A failed footballer, he is now a fairly menial ‘computer operator’ – something that Ange points out at every turn, though without the slightest hint of malice. Tony is a man at the end of his tether, and he takes his fury out on his gauche, well-meaning wife, constantly snapping, and soon shouting, at her. He won’t let her learn to drive (‘He says I’d be terrible at it.’), he doesn’t want to hear about her job, and he has, we discover, threatened to Sellotape her mouth if she doesn’t stop talking. He is a pathetic little bully, and this makes Ange’s admission that ‘I never thought anyone would want to marry me’ even sadder.

Will Ange have a happy life now that she has arrived in Essex suburbia? It’s hard to imagine that she could be contented with Tony, yet she seems to accept her lot, and he is the kind of man who will stay with her, knowing that no-one else is likely to have him, turning, over the years, into the grumpiest of grumpy old men, blaming his wife for his own shortcomings, unable to take responsibility for his own life. I wanted more for Ange, but perhaps she doesn’t want more for herself. As Beverley says, ‘I blame…women’s lib and all that permissiveness.’

There are many laugh out loud moments in Sarah Esdaile’s excellent production, but there is plenty of pathos too. Mike Leigh never writes straightforward comedy; he digs out the truth behind our behaviour and reflects it back to us in these strangely empathetic characters.

While Beverley, Laurence, Tony and Angela are desperately trying to fit in, on the other side of the wall Abigail and her friends are pogoing to the Sex Pistols and enjoying their Teenage Kicks, desperate to get out.

Forty years later, is Abigail still proclaiming Anarchy in the UK, or is she a housewife in Hadleigh? Now there would be an interesting sequel – and its ability to make you want to know what happened next is one of the many strengths of this timeless masterpiece.