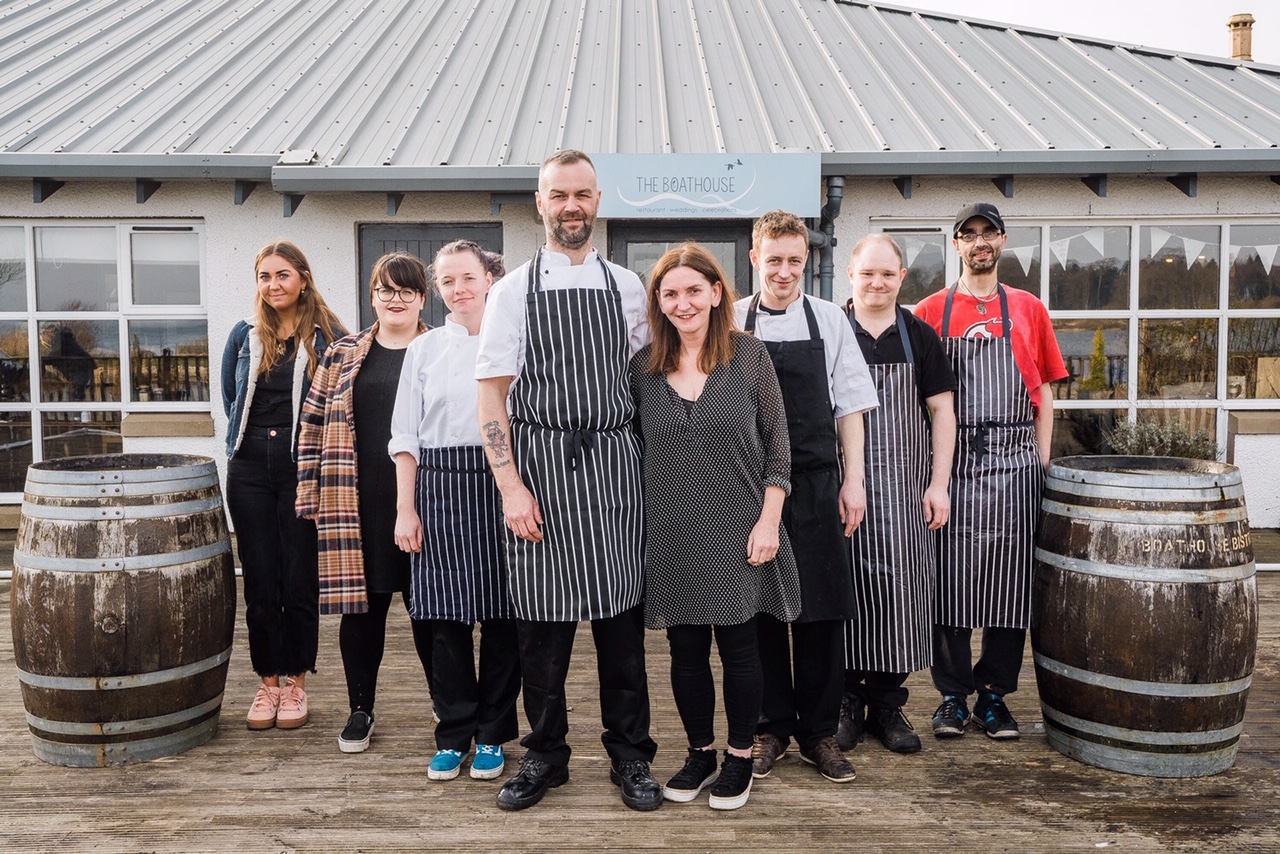 The iconic Boathouse restaurant on the shores of Loch Leven has an ambitious new owner!

Sally Fotheringham, from Fife, has left her career in financial services to return to what she calls her “first love” – the hospitality industry. The pleasure of looking after customers in a convivial atmosphere has never left Sally, who caught the bug when working in a bar as a student.

Having taken possession of the 75 seater restaurant earlier this month, which also includes a dog friendly coffee and cake area, an outdoor terrace overlooking the water, and a gift shop, Sally has quickly put her stamp on the business.

A new Head Chef, Scott McMillan, has been appointed to revamp the menu, whilst the popular rustic style eatery will soon be opening seven days a week.

Lined up is a busy calendar of booked events including weddings, meals for community groups, school reunions, and even a theatrical production of a play about Mary Queen of Scots.

Commenting on her acquisition of the business, Sally Fotheringham said: “I’m absolutely delighted to be the new proprietor of The Boathouse. I know how popular it already is for tourists and locals alike, as a friendly stop off for those walking, cycling and bird watching around Loch Leven. I’m also very excited by the vibrancy of the weddings and events trade -it’s fantastic to inherit such a busy diary, and an added bonus for any restaurant. It’s a lucrative sector I can certainly build on as the business grows, and we’re already developing new packages to make our offering even stronger.”

Sally, who holds an MBA, went on to state that she was confident that her “financial brain and sound business acumen” would stand here in good stead, and allow her to look at the business objectively.

“Yes, it’s quirky and charming, but I want this business to be well run, and to fulfil its true potential,” she said. “I always wanted to run a hospitality business like this, but like many people, was persuaded to go into a different sector altogether, so it’s a lifelong ambition I’m now fulfilling. We’re very lucky to have a brown sign in the town directing people to us, and to be so well known in the area.”

“In the summer months, a location like this really does come into its own,” she added, “but I want to develop year round trade.”

These ambitions have already led Sally to “jump at the chance” as she put it, to employ new chef Scott, who has recently worked at Trump International in Aberdeen, along with a top hotel in Inverness, where he won two rosettes with his own menu.

“Scott is absolutely the new chef I was looking for, with a wealth of experience in flavour combinations, and working with seasonal produce.  Together we’re coming up with a strong new menu which will do justice to the abundance of excellent local produce in this area,” she said. “We’re looking at some new suppliers, although the business is already served by some iconic names, such as Hunters of Kinross, David Lowrie Fishmongers and Keith McGregor & Son.”

“We certainly want to retain suppliers such as the local Kinross Brewery who supply us with a wide range of craft ales. They’ll now be carrying out special tasting events  for our customers, and we hope they may even debut some new drinks here,” added Sally. “We’ll certainly be widening out the choice of fish and seafood dishes available here too, as we see that as a real selling point for a waterside location like this.”

Plans are afoot to restock the gift shop and introduce a customer loyalty scheme, but Sally is adamant that one aspect won’t be changing in the business – the strong branding used on the menu.

“I love the fairy light imagery that borders the existing menu,” said Sally, “They’re used to dress the restaurant and create a lovely soft glow, so that won’t be changing either. I will also keep the logo which has a small brown trout image in the “O” of Boathouse, to represent the local fishing that goes on here.”

“The area is known for the pink footed goose – it’s an attraction for many bird watchers at nearby Vane Farm – and we have an image of this on the menu too. It’s also become a bit of a local icon for us, so I’m happy to retain it.”

“Hopefully, this blend of old and new in the business will be just what our customers are looking for,” finished Sally. “We’ll also retain our dog friendly status for the café area, as coming to a beautiful place like this with the family pet is so important. There’s nothing holding us back from having a really strong first Spring & Summer season here in Kinross, and I’ll certainly be putting the hours in to make it all happen.”

For further details on The Boathouse, Kinross go to the website at www.theboathouselochleven.co.uk or call 01577 864380.