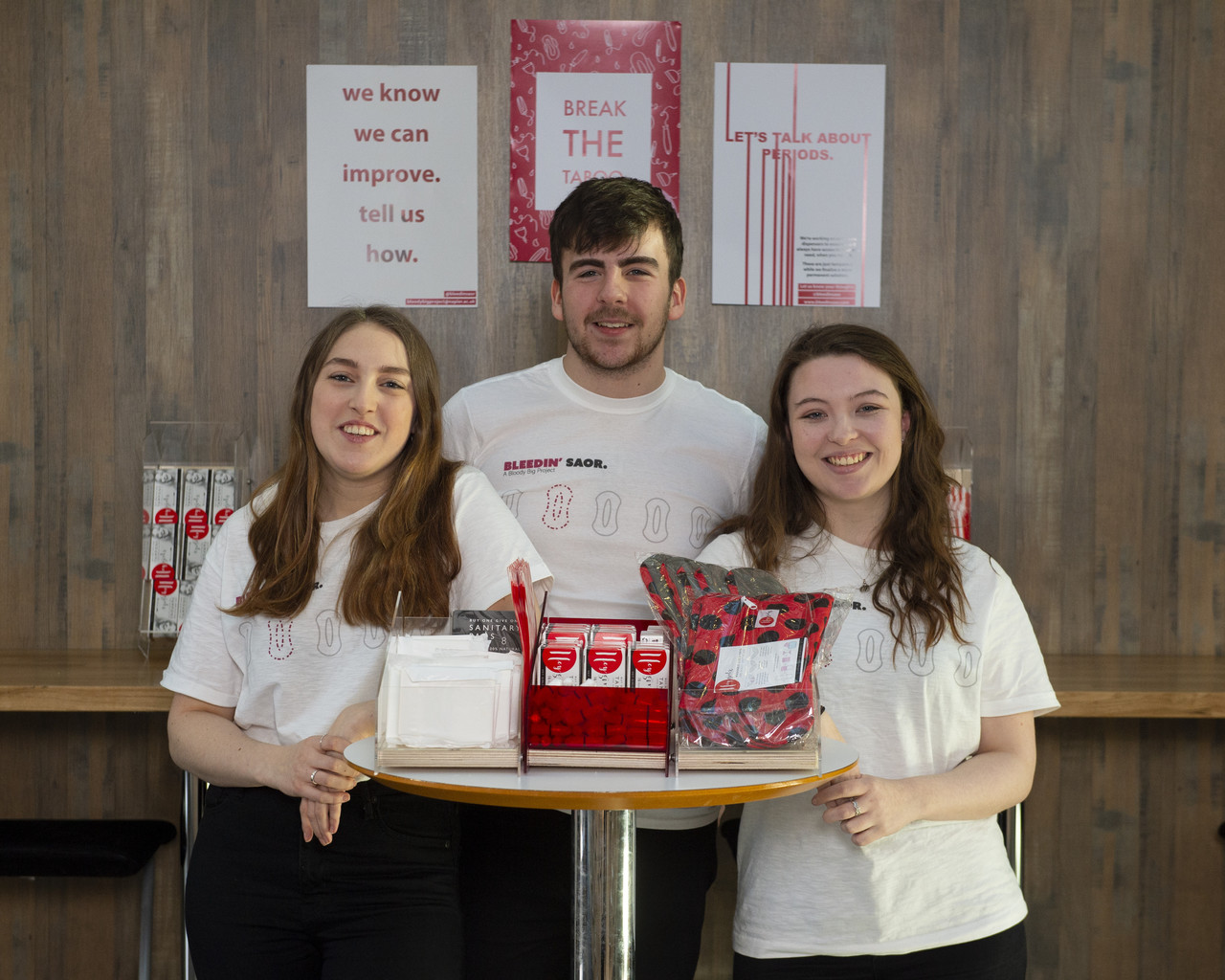 A new dispenser for Edinburgh Napier’s free sanitary products will be popping up on campus this week thanks to the work of a student collaborative formed to confront the perceived stigma around menstruation.

‘Bleedin’ Saor’ consists of a collection of Product Design, Film and TV students from Edinburgh Napier’s School of Arts and Creative Industries. It is aiming to raise awareness of period poverty and to put an end to the stigma surrounding ‘that time of the month’.

As part of their third year placement, the group’s product design students – Sam Calder, Hannah Stevens and Brogan Henderson – have been working with the University’s Property and Facilities’ team to roll out an initial, temporary design for a dispenser that will house free sanitary products across all three campuses.

The new dispensers – which will enhance the current collection points across campus – consist of five coloured baskets. They have been designed and laser cut from acrylic plastic.

The open design of the new dispensers see the sanitary products appear front and centre, with the dispensers initially being placed on top of the storage cupboards that were installed when the scheme was rolled out.

Four of the dispensers have been made from clear acrylic with the remaining dispenser made from red acrylic. This is to symbolise the statistic that 1 in 5 girls in Scotland currently live in period poverty.

The dispensers will stock a range of product bought from Hey Girls – a social enterprise based in Edinburgh, which has developed its own range of environmentally friendly product that tackles period poverty across the country. Some existing stock of Tampax and Always products will also be available.

Late last year, Edinburgh Napier committed to providing a range of free sanitary products to students as part of and funded by a new Scottish Government scheme.

Students have been giving their feedback on the scheme across its first five months, and further views are now being sought on this initial design and their locations.

The Bleedin’ Saor team said: “This temporary solution is a perfect way to stir opinions and get people talking about periods. This dispenser will allow us to collect data, feedback and most importantly show people that periods are nothing to be ashamed of.”

Jamie Pearson, Environmental Sustainability Manager at Edinburgh Napier, said: “We’re incredibly proud that the Scottish Government funding is enabling the University to provide a wide range of free single use and reusable sanitary products to all students. The work carried out by the Bleedin’ Saor team is fantastic and will positively reduce stigma and also influence how we distribute products and engage with our student community.”

As part of its campaign, the student design group is also working with creative marketing and PR agency Wire to roll out its Bloody Big Brunch initiative across the University in March.

Dubbed as the world’s biggest brunch, the event will see people across the country host their own brunches at home or work. However, instead of paying for their brunch with money, guests must pay with sanitary products. These can be purchased via Hey Girls who will automatically double a donation and distribute the products to charities around the UK.

The events will be the first time a university has hosted a Bloody Big Brunch. More details about this event on the 6 March 2019 will be released very soon.

Also underway is work by the BA Film and BA Television students on an exciting collaborative documentary project about period poverty.

The film takes its inspiration from the Scottish government’s ground-breaking initiative to provide free period products in all schools, colleges and universities and will look into the scale of the problem and the stigma and challenges faced by girls and women around menstruation.

Following the journey of the Product Design students, the documentary will also cover the team’s trip to Uganda later on this year, where they will research international contexts and projects tackling sustainable period provision. The film is directed by Cosima de los Arcos – fourth year BA Film – and will be produced by Lizzie Gardiner – third year BA Film.