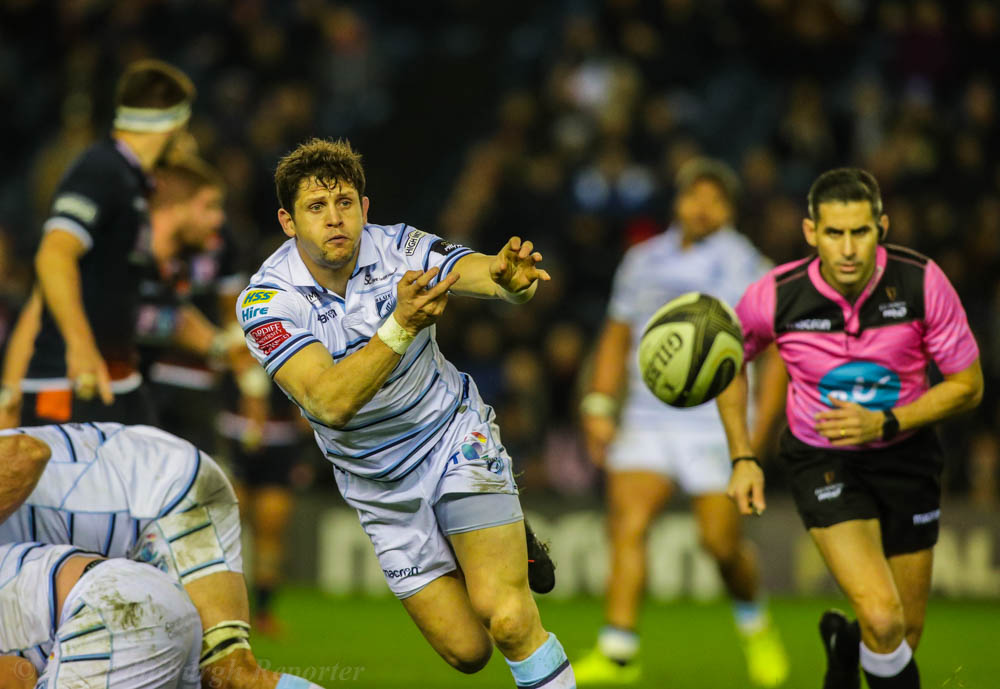 For the second, consecutive weekend, Edinburgh Rugby’s Guinness PRO14 opponents were from the Principality of Wales, Cardiff Blues being the visiting side this time around. The match was also one of those rare, Saturday night fixtures at BT Murrayfield. But with England v Wales on the telly, would the support turn out?

Being well aware the Blues were a different prospect to last week’s Dragons, the home side were hoping for a similar start to the match. But it was the Blues who applied early pressure to the Edinburgh defence and moved the ball well through the hands to make early gains. However, they lost possession through a turn-over penalty, giving Edinburgh the chance to clear.

The resultant lineout wasn’t as cleanly executed as the hosts might have wanted, but hooker, David Cherry gathered in the loose ball and broke clear through the mass of bodies, making about 30 metres before being dragged down just inside the Blues’ 22.

However, he managed to get his pass away off the ground to the chasing Nathan Fowles, who then had a clear run in for the first score of the match. Stand off, Jaco van der Walt, then followed up with a successful conversion to make the score 7-0 to Edinburgh after eight minutes.

Cardiff regained possession from the restart, but were soon back on the defensive as Edinburgh managed to steal the ball and go back on the attack. They gradually pushed Cardiff back, winning a couple of penalties on the way. Both of these were sent to the line, but the home side failed to take advantage of either and they lost the ball – once to a turn-over and once to a penalty – allowing Cardiff to clear.

The second of Edinburgh’s tries came from a handling error by the visitors and a ‘fumble’ from Fowles. The ball was jolted loose in a tackle but Fowles was on hand to try to gather the bouncing ball. As the ball bobbled about he got a hand to it and everyone hesitated, assuming he had knocked on, but the referee indicated that the ball had gone backwards, and signalled ‘Play on’…

Fowles needed no further invitation and launched through the static defence line, deep into Cardiff’s half of the field. With only Dan Fish to beat, the scrum half off loaded to the accompanying Bill Mata and the big Fijian galloped in the remaining 20 metres for the try. Van der Walt then slotted home his second conversion for 14-0 after 17 minutes.

Cardiff then started to come into their own and pressurised the Edinburgh defence, driving deep, but the home side stayed firm and repelled all their attempts to score. The best chance for the visitors came around 25 minutes in, when some neat play from Cardiff’s two Southern Hemisphere centres put their 9, Lloyd Williams, through a yawning gap and on his way to the line.

Just as he got within a few metres, the chasing Mata hauled him down with a try-saving tackle and, in the resultant ruck, forced a penalty as Williams was deemed to have held on for too long.

The Blues maintained their upper hand for the rest of the half, but Edinburgh’s defence answered all their questions and the sides went into the break with the scoreline at 14-0 to the hosts.

Despite Cardiff having the majority of the play early in the second half, it was the home side who scored first through the boot of van der Walt with a 48th minute penalty for 17-0. However, that was about the point in the match when it started to go a bit awry for the Edinburgh squad.

A raft of subs from the visitors’ bench injected a bit of energy back into the Blues and their first score followed a few minutes later. Working their way forward, flanker Olly Robinson found wing, Jason Harries, with a short pass and the former Edinburgh player rounded his opposite number before launching Williams on his way to the goal line. With a successful conversion from their 10, Jarrod Evans, the score was 17-7 with 53 minutes played.

Getting back into the game, van der Walt was handed another penalty chance, but this one slid past the upright, but Edinburgh were still, just about, managing the points gap.

Until the 63rd minute, at least… Winning line out ball from a penalty, Evans passed inside to centre, Rey Lee-Lo, who took the ball on along looping run deep into the opposition 22. Drawing the tackle, he passed to Harries, now in space, and the wing crashed over near the flag for the Blues’ second try and 17-12. Evans missed the conversion, but Cardiff were starting to look dangerous.

Still, Edinburgh were at home, and Edinburgh hadn’t lost a home game all season… Had they?

With 10 minutes to, that record took a tumble. And it was that man Harries again. Following on from a ‘nearly’ second try from Williams, Harries was the last man in line from a fine running and passing move that left Edinburgh struggling and Cardiff on equal points as the winger smashed through in the opposite corner for his second try of the match. Evans made no mistake from the tee this time and Cardiff were ahead for the first time at 17-19.

Despite a late surge from Edinburgh, Cardiff held on to take the win and inflict the home side’s first defeat in all competitions at BT Murrayfield this season. With the European Cup quarter-final on the horizon and Leinster the week prior to that, let’s hope it’s their only home defeat of the season. At least until the end of March…