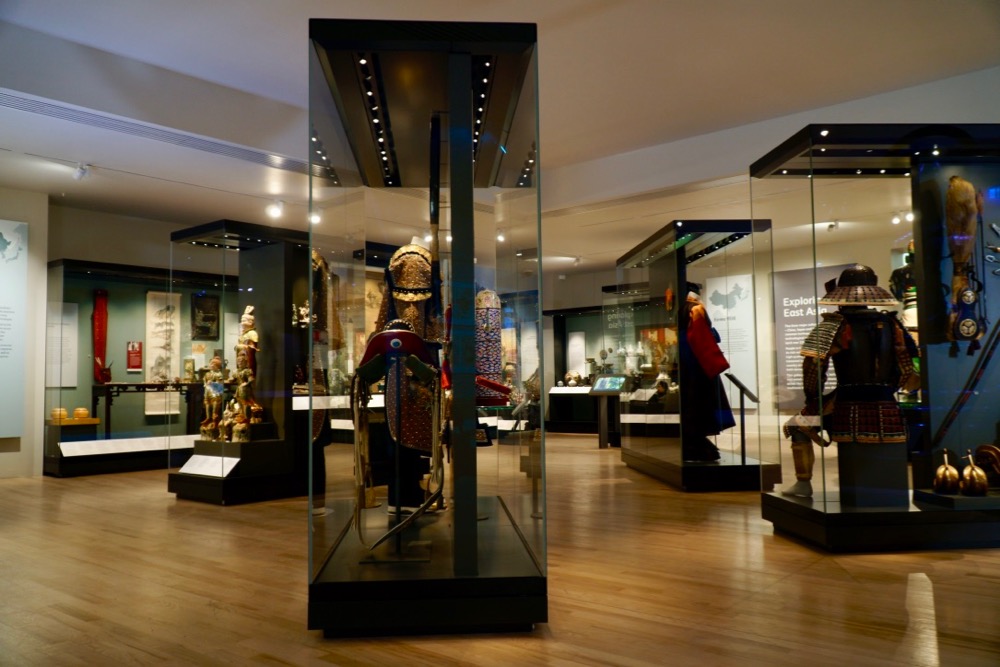 Of the 12.4 million objects which the National Museum of Scotland (NMS) has in its possession, there are only a fraction (around 0.4%) of them on show at any time. Now they have three more spaces to exhibit some of their treasures.

The museum has been transformed in the last 15 years by spending £80 million on new galleries and investing in new ways of exhibiting all their lovely items from the natural world, art and culture and science and discovery.

Yes, there are still people who lament the removal of the fish ponds, but I am sure more will welcome the new galleries which open on Friday just in time for the half-term holidays.

The Museum’s curators have chosen 1330 objects for these galleries, 40% of which go on display for the first time in generations. In particular the new Ancient Egypt discovered gallery marks the 200th anniversary of the museum acquiring its first ancient Egyptian objects. The story of the civilisation which evolved over 4,000 years is told here with objects such as the only intact royal burial group outside Egypt, the only double coffin discovered in Egypt and a decorative box of King Amentohep II.

Some 6,500 hours have been spent in conserving the objects which are now on display.

I spoke to NMS Director Dr Gordon Rintoul who is naturally very pleased that this major transformation is now complete. At the ETAG conference last week the Chief Executive of the Association of Leading Visitor Attractions, Bernard Donoghue singled out the museum as one of the attractions which is excellent at continually reinventing itself. This is the way to continue to attract so many visitors, and the NMS is the most popular visitor attraction in the UK outside London and top in Scotland.

I asked Dr Rintoul about the modernisation plans. He said : The changes here have been done over a long period. We started planning them 15 years ago. It’s been 10 years since we actually started work on site. This week we are actually opening the final three galleries part of the transformation of the National Museum.

“Throughout the whole project we have increased the amount of public space and gallery space significantly. In these new galleries like the previous new galleries they contain a lot of items which weren’t on display previously. Something like 40% of the items in these three new galleries have not been on display for a generation or some not at all previously.”

There is a mini-gallery space next to the Balcony Café on Level 3 devoted to The Art of Ceramics which unites many themes from all over the museum in one place. There are ceramic items from the 19th century BC to the 21st century AD showing off one of the most universal man-made materials.

From early cultures making containers to hold water or cook food, these ceramic objects are art with a hold in our daily lives. And ceramic material also features in protective body armour, high tech mobiles phones and also prosthetic joints. You will see examples of all of these here before popping next door to the café to refuel.

The other two new galleries explore the remarkable cultural heritage of two cultures. Ancient Egypt Rediscovered, Exploring East Asia and the Art of Ceramics present internationally significant collections in new ways, and often with some interactivity for visitors.

The smallest item displayed in Ancient Egypt Rediscovered is a gold fish amulet which measures only 10mm x 6mm. It was in 1819 that the NMS first recorded the acquisition of some ancient Egyptian objects and now they are able to interpret the full breadth of the collection amassed since then.

The opening of these new galleries will spark a new outreach programme extending the reach across the country with collections, knowledge and expertise being shared.

I chose to concentrate on this gallery and spoke to the three curators about the exhibition which combines China, Japan and Korea in one space. The three cultures have both a common history and geographical closeness and so there is much crossover as well as distinct cultures.

Dr Rosina Buckland, Senior Curator, Exploring East Asia showed me a couple of key items in the exhibition and explained their background.

I spoke with Dr Louise Boyd who is the Assistant Curator Japan at the Museum, and works there on a three year contract funded by the Japan Foundation. She showed me the scroll loaned by The City of Edinburgh Council. It was discovered several years ago in the Central Library.

Finally I spoke to Dr Qin Cao who is the Curator of Chinese Collections at NMS.

Dr Boyd explained the story behind the scroll : “We are particularly excited to display because it is from the early 1700s. If you look at it, it actually is in amazing condition. It spent two years in conservation in Amsterdam getting restored. We are very lucky that the Sumitomo Foundation funded the project and restored it to its full splendour.

“It is 13 metres long, handscrolled so it would be unrolled one part at a time. As you can see we just have one section of it on display at the moment, and every six months we will be rolling it up and then unrolling a new section. So visitors will be able to travel along through the theatre district through the scroll. You can see different shops, different theatres, actors, people watching plays. There’s lots going on and a lot of detail there.”

The scroll is entitled ‘Theatres of the East’, and it depicts a street scene in the theatre district of Edo, Tokyo. It was gifted to the Central Library in 1945 by the daughter of Henry Dyer, a Scottish engineer who played a major role in revolutionising the Japanese engineering education system. There is an interactive display beside the case housing the scroll and there you can see digital displays of the whole work.

Dr Qin Cao, Curator, Chinese Collections, Exploring East Asia told me the story of a 3000 year old bronze food vessel which is called a ‘gui’ and dates from the Western Zhou dynasty c1050 – 771 BC. She finds it fascinating that it was one bright golden yellow in colour and now as a result of use and the passage of time the colours have completely changed. The gold and shiny look would attract the attention of those using the vessel and also the spirits.

Dr Cao explained : “It would have been used by the elite of the time to make a food offering to ancestors and deities. They would also have served food from it at functions, but primarily they were ritual offering vessels.

“It was made using ceramic moulds. This was a particular invention of China at the time known as the piece moulds technique which was derived from the Chinese very advanced ceramic industry of the time. Many people know about China’s ceramics but few people would have known that the ceramics industry also led to the advanced development of bronze casting and elaborate bronze vessels like this one made in piece moulds.

“The handles are in the style of this mythical creature and there are little faces and a geometric pattern which would be the fashion of the time. That helped us date the piece.”

Finally and by no means least I spoke with Dr Rosina Buckland, Senior Curator, Exploring East Asia who is in overall control of this gallery which combines artefacts from China, Japan and Korea. Dr Buckland explained that ceramics in East Asia are both similar and different. She said : “One of the important messages in this gallery is the interconnectedness of the three cultures. We have a display here that includes several beautiful examples of Japanese porcelain from the late 19th century that emulates Chinese design, colours and motifs. It very much looks to Chinese history and historical examples of prestigious ceramics and trying to recreate those in Japan. This was an extremely popular type of ceramic at the time. It shows how China was always a very important source of inspiration for Japan. Porcelain, since it is porcelain we are talking about, is there across all three cultures.”

There is a digital display in the gallery which takes you through the whole process of manufacturing porcelain, in which materials bind the three cultures. Dr Buckland elaborated : “The quality of the clay body, the glaze itself will vary in colour and that is one of the ways we can tell the different porcelain from different cultures apart – and also the way it is painted and the designs they use.”

Dr Buckland also told me the story behind a more modern Japanese vase which is created from both silver and gold. She said : “We are keen to make the point that these three cultures are alive today and artists are doing innovative, novel things with materials looking to past traditions. This is a silversmith, Ōsumi Yukie, who inlays different precious materials into the silver body. It is a long painstaking process, creating this effect of rippling waves moving over sand. She has recently been designated a national treasure!”

This £3.6m phase of the project has been made possible thanks to support from The National Lottery Heritage Fund, The Wolfson Foundation, The Sir James Miller Edinburgh Trust, the Garfield Weston Foundation, The Negaunee Foundation and a generous community of Trusts and individual donors. Dr Rintoul also explained that The Scottish Government have backed the project throughout.