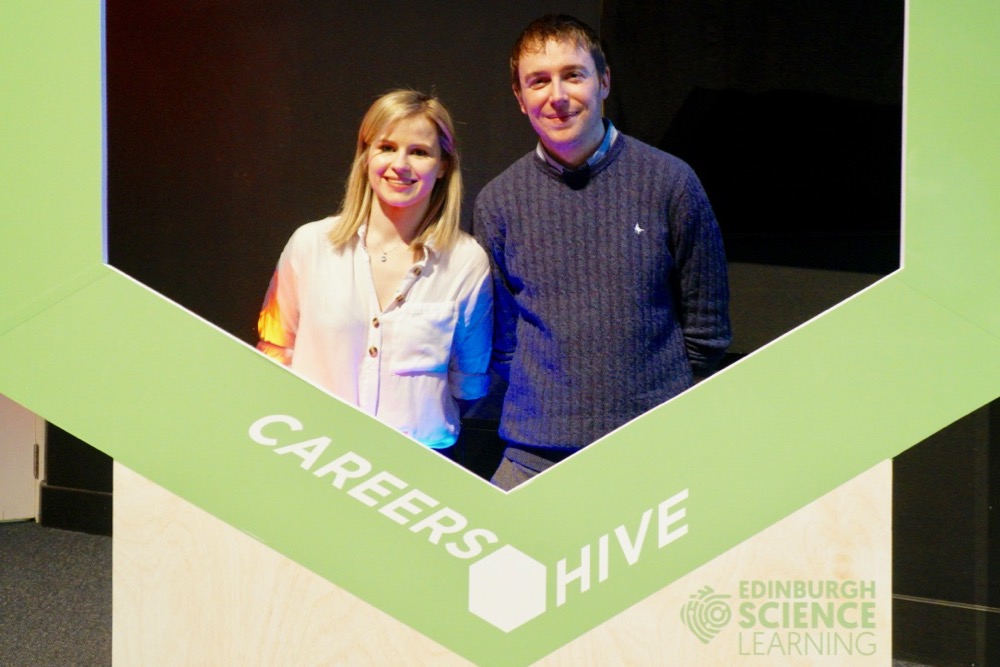 It’s hoped that by attending the event S1-S3 pupils will be inspired to pursue a STEM-based (science, technology, engineering and maths) career through a series of hands-on activities as well as discussions with young STEM professionals.

This year the event takes place from 25 February to 1 March at The National Museum of Scotland in Edinburgh and will welcome pupils from schools around Scotland.

On a visit to Careers Hive school groups will be guided through three main activities by a Science Communicator:

Hands-on exhibition in the Grand Gallery with four themed zones where students engage with young STEM professionals about what they do and try out activities related to real jobs.

This includes: Build & Connect where students design their own app or dismantle a combustion engine in a lawnmower, Design & Play in which pupils design and build their own creative robots using Cubelets, a modular robotics system or using real-life acoustic equipment investigate how sound engineers modify digital sounds, Heal & Feed where they turn smartphones into microscopes to learn about the use of microscopy in healthcare and agriculture or live 3D print and handle a range of 3D printed objects for biomedical purposes such as organs, bones and prosthetics and finally Energy & Environment where students learn about the environmental impact of large-scale developments using digital projections on sand or consider skills needed to work in extreme conditions such as freezing temperature or staggering heights.

Panel Discussion in the Auditorium with young STEM professionals from a variety of industries who tell their stories. Students also have their say on important issues in the industry today.

We spoke with two of the speakers about their own careers :

This year’s line up includes, among others:

Christina Mackaill whose background is in biomedical science and medicine; she eventually hopes to follow the Flight Surgeon path to save lives during space missions. Christina founded Scotland’s first Space Medicine Society in 2016 and led a research project at the Microgravity Centre in Brazil under the supervision of one of the world’s leading space doctors, Thais Russomano. She created the pioneering Mackaill-Russomano Method for performing CPR on the surface of the moon and Mars.

Naziyah Mahmood who is City of Glasgow College’s STEM coordinator. With background in Aerospace Engineering and Astrophysics, Naziyah worked as a mission analyst on European Space Agency missions and contributed to the Particle Physics Experimental Project on ATLAS Detector data at CERN. Alongside this she’s a martial artist who specialises in weapons arts and Korean sword arts.

Vicki Allen, FIFA’s Assistant Referee. She started training as a football referee at the age of 16, and is now a referee at the Women’s Premiership level, and has progressed through the leagues to become a FIFA Assistant. In June 2017, Vikki was one of 32 women from 20 continents who climbed to the top of Mount Kilimanjaro in Tanzania, hauling goal posts and nets with them to play the highest altitude game of football ever.

Workshop in the Learning Centre which will allow students to explore how the strengths, skills and interests they have and will develop at school will help face challenges in future workplaces.