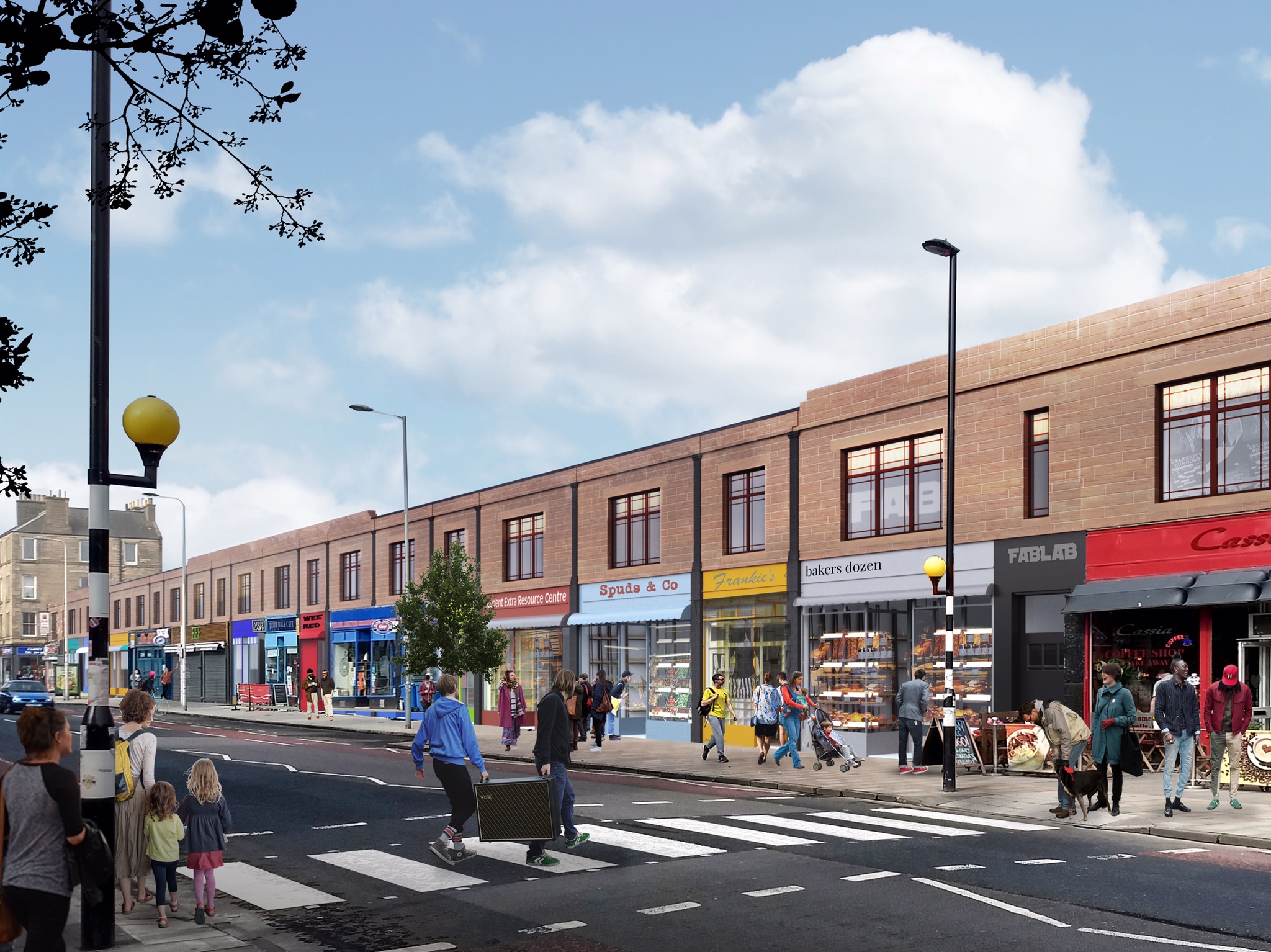 The council’s Development Management Committee met today to discuss the application by Drum Property to demolish a two storey Art Deco building on Leith Walk. After four and a half hours of discussion they refused the application to demolish the building and put up a new mixed use block.

This development has attracted much discussion in the past few months.

Before the meeting there was a demonstration outside the City Chambers and we spoke to Council Leader Cllr Adam McVey and campaigner from Save Leith Walk, Clara Bowker :

Very loud demonstration today outside the City Chambers @Edinburgh_CC by the #SaveLeithWalk campaign as councillors meet to discuss the application to deliver buildings at Stead’s Place pic.twitter.com/ZqGFi5nnmu

The planning officers had recommended the application for approval. They stated that it allows the wider site to be developed and that the ground floor retail premises would be modern and it would be good for the ‘town centre’.

But the council officer admitted during his initial comments : “This is a finely balanced assessment.”

Beforehand councillors were urged to reject plans to demolish the Art Deco building which sits in a conservation zone.

Ahead of the hearing which started  at 1pm, supporters of the grassroots Save Leith Walk campaign gathered outside City Chambers to show elected representatives how strongly the local community opposes the demolition at Stead’s Place and development of 471 student flats, 56-bedroom hotel and shops being proposed by Drum Property Group.

The campaigners said that more than 80 per cent of householders in the immediate vicinity of Leith Walk are against Drum’s planning applications. More than 12,000 people signed a petition to save the current building and thousands of locals lodged formal objections.

Ian Hood their spokesperson said :“Unlike the developers we haven’t required the services of a paid PR company to solicit supporters for our campaign, our support has grown organically and drawn in people from all parts of our community.

“It comes from people of all ages, backgrounds, people new to the area, and families whose links to Leith go back generations.

“We have spent time analysing reports, planning laws, researching architecture and town plans. We have found that the proposals fail on several key points. The community has a very strong case indeed.”

The two-storey sandstone building at risk on Leith Walk is already half-empty but it was previously home to successful businesses such as the popular Leith Depot bar and music venue.

Campaigners claim that the developer has been running down leases in a bid to clear the site for demolition. There is a determination among locals to see the site become a thriving community hub for small start-ups, community projects, social housing and student flats.

Cllr Osler asked about the lack of conditions regarding deliveries. This is apparently not often used according tot the chief planning officer due to problems in enforcing any conditions.

FCllr Chas Booth asked about the provision of cycle parking which should be 100% and the application only provides 30%.

Jennifer Marlborough represented Leith and Newhaven Community Council and said they were passionate about the history of the area they represent especially the mixed style of architecture there. She questioned if the student flats would be used for holiday lets outside term time.

Former councillor Nick Gardner represented Leith Central Community Council and pointed out that the new building would crowd the area, that seven stories were too many and that different coloured cladding will not disguise the overwhelming mass. He said the existing building adds to the character of the area. His community council colleague Julian said the area is Stockbridge on stilts. Stead’s Place is a location ideal for affordable housing mixed with student housing within the existing sandstone block.

Sally Miller spoke for Leith Links Community Council and pointed out that the areas covered by all three local community councils probably intersect at Stead’s Place. She insisted that developers should be made to keep to the rules, and that there was no justification for demolition of this building in what is an open and light area.

Cllr Mowat asked about the current density of Leith Walk and the impact of this development on the density of the population there.

Speaking for the Cockburn Association their representative, Terry Levinthal, showed a slide presentation with some very old images of Edinburgh including the 1919 Bartholomew plan just the year before Leith and Edinburgh merged.

He explained that the term ‘tenement’ is not descriptive of a particular kind of building but the tenure in which it is held. He said there are exceptional circumstances here that the development offers no additional benefits over those which can be offered by retaining the building. The Cockburn object to the development.

At the end of a very long afternoon, councillor after councillor explained their reasons for refusing the applications to demolish the two storey sandstone building and replace it with a new seven storey block.

Convener Cllr Neil Gardiner said : “The norm in Leith is for commercial use on the ground floor and housing above. This is a conservation area so all options to keep the building have to be explored which I don’t think they have.

“There are good things about this application – there is family affordable housing which there is not enough of in the city. I hope that Drum will come back with a proposal which takes on board everything that the committee has said. It could be a really good startup workplace, for example. You could use the roof space in the building. The community wants to engage with you. Please take on board the comments and come back with something better.”

Planning for this development was refused on several grounds – under the housing policy, that the proportion of housing to student accommodation was not 50/50, and the fact that it lies in a conservation area and there was insufficient merit in demolishing the building. Other grounds included lack of cycle parking, adverse effect on amenity and daylighting and that the design of the replacement building does not outweigh the loss of a building in the conservation area.

Councillors were unanimously agreed in the reasons for refusal.