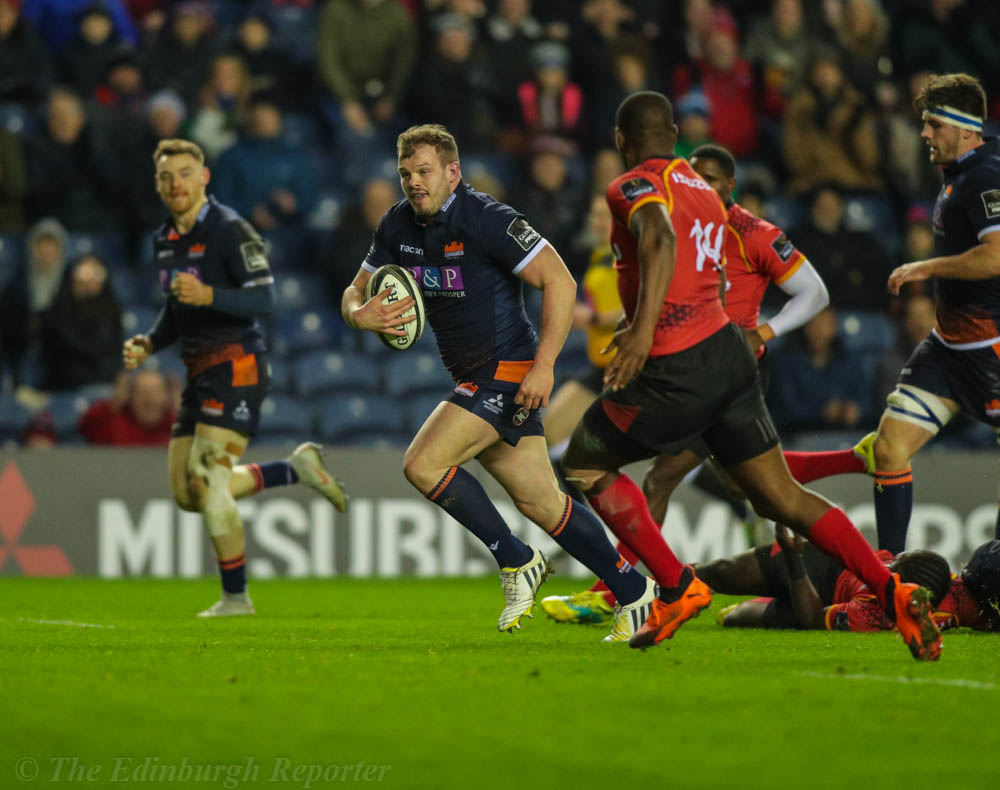 Having secured the 1872 Cup with two successive wins over Glasgow, it was back to the ‘normal’ PRO14 fixtures on Saturday night as Edinburgh Rugby welcomed South Africa’s Southern Kings for their Conference ‘B’ match at BT Murrayfield.

The Kings, for their part, had only won one of their matches this season, but had played two fewer than the hosts as neither they, nor the Toyota Cheetahs, play in the ERCC, so get a couple of ‘rest’ weeks.

The Kings managed to clear a loose ball in their goal area, but it ended up in the hands of Duhan van der Merwe and the wing launched himself at the defence, pulling in several of the opposition. Dougie Fife filled the resultant gap and was on hand to receive van der Merwe’s offload and gallop in for the first try. Simon Hickey then followed up with a successful kick for 7-0.

Virtually straight from the restart, try No. 2 was on the board. A break upfield from Simon Bergan brought the game back to the edge of the visitor’s 22. The ball was then carried deeper by second row, Callum Hunter-Hill. A quick recycle and the ball was out to Darcy Graham on the wing and he threw himself at, and over, the line for the score. Hickey followed up with another conversion and it was 14-0 with less than eight minutes played.

Two minutes later, after the Kings had briefly handled the ball on the way back to halfway for the restart, it was try No. 3.

This was another one for Graham, but down the left wing – he does get about – this time. Hickey’s attempt at goal fell a few metres short, but it was now 19-0 with 10 minutes and 17 seconds on the clock.

From the restart, the home side found themselves under a bit of attacking pressure from the Kings and Edinburgh were largely confined to their 22 as the South African side, finally, enjoyed some meaningful possession and drove the match away from their goal line.

A couple of handling errors lost them the ball, but the hosts couldn’t find a way out and gave away a brace of penalties too close to their goal area for comfort. The Kings hammered away, but couldn’t quite find their way to the line, but it was a good 15 minutes before the home support could breathe easily.

As the match approached the break, Edinburgh were once again in control and, with a few seconds left they chose to kick for touch with a penalty. This gave them a platform close in and a few minutes of rucking and mauling along the line saw Rory Sutherland driven over near the posts for the fourth, and bonus point, try. No mistake from Hickey this time and the score was 26-0 as the sides went in.

The second half started, more or less, where the first had left off. Running the restart ball straight back, a penalty after a few minutes gave Hickey the chance to get in close. Another line out and ruck/maul series handed Simon Bergan his first try for Edinburgh as the prop blasted over from close in for try No. 5. Hickey then missed the, relatively, easy kick, but it was 31-0 with 47 minutes played.

The following 15, or so, minutes were fairly close, but Edinburgh were soon back in the driving seat with Graham weaving his magic round the opposition and van der Merwe weaving some of the opposition into the turf.

The breakthrough came via a break from debutant scrum half, Charlie Sheil. He managed to find a bit of space and almost got clear, but he was tackled about 10 metres out and brought down. Not, however, before he got his offload away to the following late replacement substitute front row – if you get the drift – Cammy Fenton. He then had a clear trot in for his debut try and 36-0.

No doubt learning from his previous attempt, there was no mistake from Hickey’s boot this time round to bring the score line up to 38-0 with 15 minutes still to play.

With six tries and a bonus point in the bag, the home side could be forgiven for taking their foot off the gas for the rest of the game, but they stuck at it and, despite a late drive by the Kings, they ran out, more than worthy, winners at 38-0.