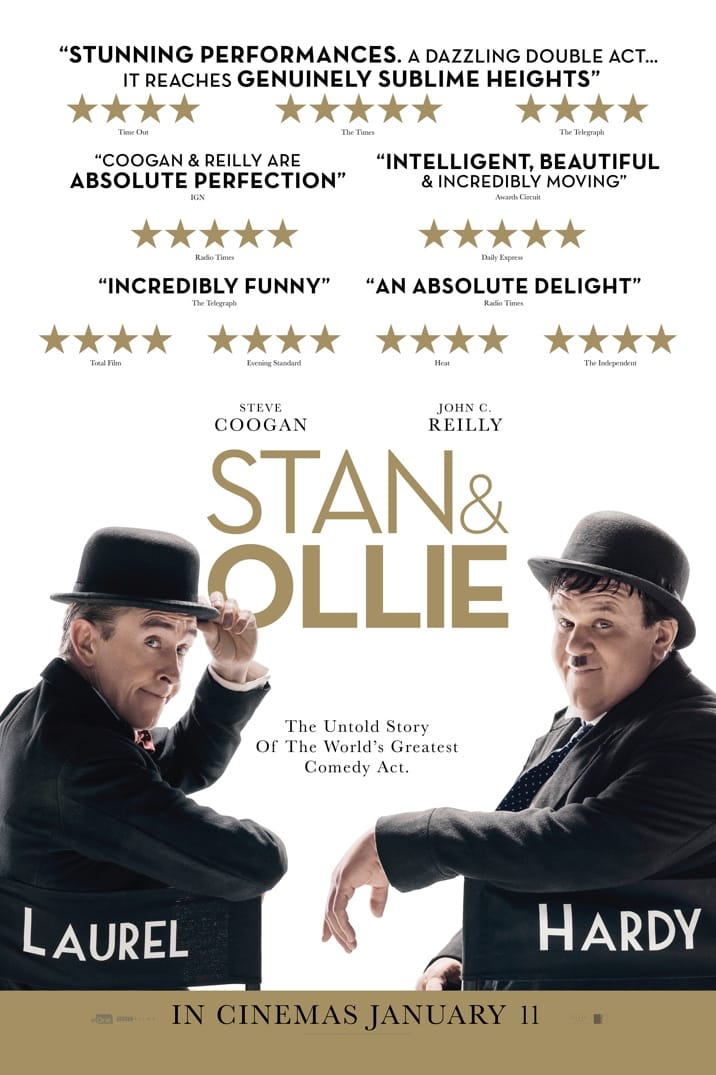 Well, here’s another nice film you’ve gotten me into

Watching the film ‘Stan & Ollie’ brought back fond memories of my childhood when I used to enjoy the classic black and white shorts with my grandparents, who introduced me to the legendary comedy double act Laurel and Hardy.

I had forgotten just how good they were in the many years since I watched them then, but watching this biographical comedy-drama as an adult and critical reviewer has made me appreciate their body of work in a new light.

Much like the film that depicts them here, to me they represent an altogether gentler kind of comedy. It didn’t really matter what the plot of their films and sketches were, rather the relationship between their screen personas. It didn’t really matter that this relationship or persona remained roughly the same in every project, because we were only interested in them.

What is fascinating about ‘Stan & Ollie’ is that it reveals that these screen personas of Laurel and Hardy were not far removed from the real men who played them. It portrays a strong professional and private partnership between two men who deeply trusted and respected each other. Stan Laurel and Oliver Hardy, the real men, are the true definition of ‘the special relationship’, having developed a positive British-American collaboration, which you know is unquestionably genuine, that has stood the test of time. How refreshing.

Commencing with an impressive long take, tracking Laurel (Steve Coogan) and Hardy (John C. Reilly) through the backlots of late 1930s Hollywood, ‘Stan & Ollie’ does not shy away from the tensions the two men faced with Hal Roach (Danny Huston).

He was ironically the man who put them together travelling with them on their final live tour, in this country 16 years later. Despite this being well after their heyday, they were no less popular, with the help of some inventive publicity of course. ‘Stan & Ollie’ is a classic British independent comedy-drama and will no doubt join the pantheon of other works in this niche but prolific genre that have come before it; ‘Four Weddings and A Funeral’ and ‘The Full Monty’ being the torchbearers.

While Reilly has received Golden Globe and Critics Choice nominations for his wonderful interpretation of Hardy, Coogan has scored British Independent Film and BAFTA nominations for his eerily accurate portrayal of Laurel, both deservedly so. Where the re-enactment of archival footage is sublime, the location shooting delivers the authenticity that a sound stage would remove.

As such, ‘Stan & Ollie’ is as well-crafted, with a warm tone and gentle pacing, just like the perfected comedy routines of the iconic duo of the title.