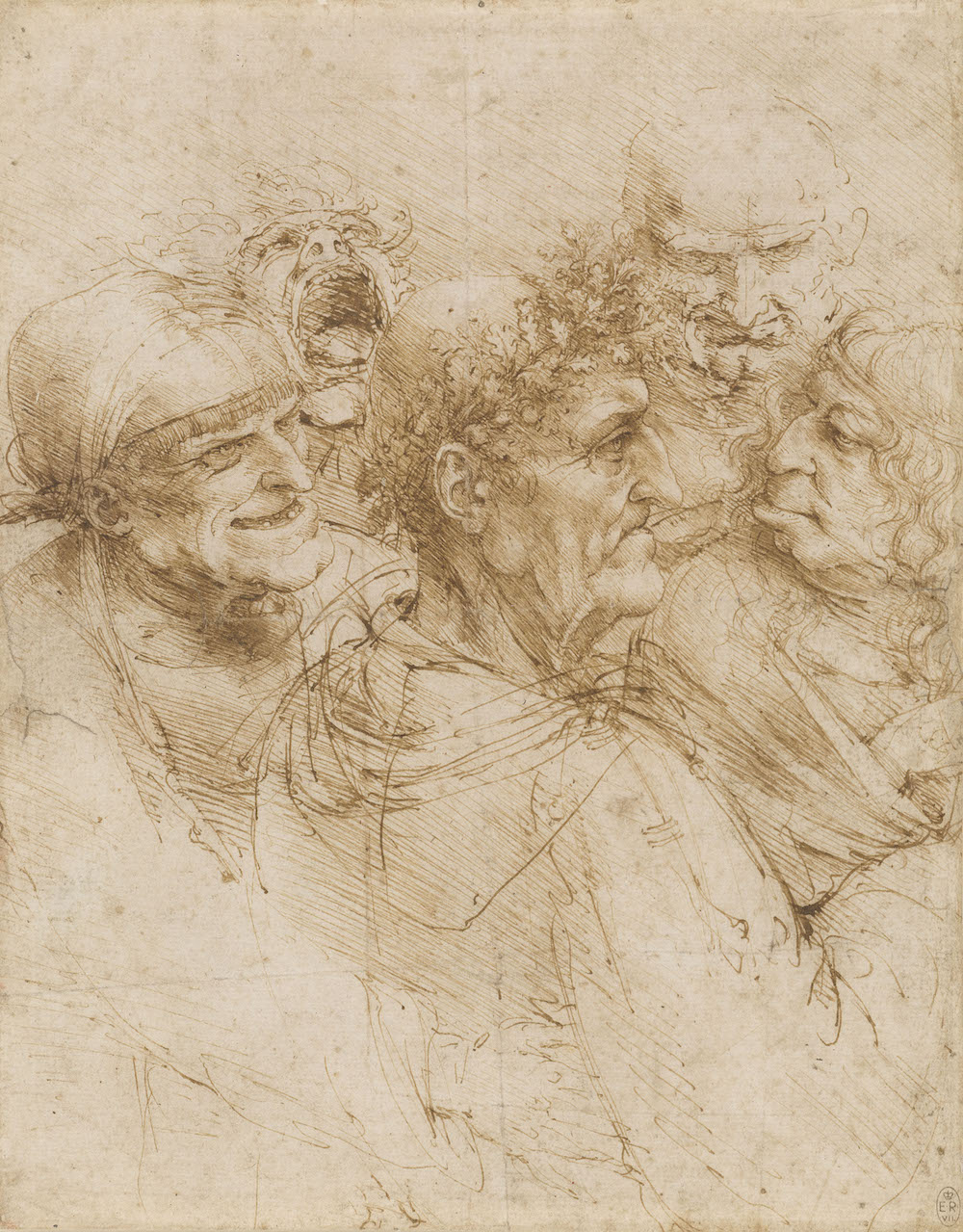 In November 2019 a new exhibition of drawings will arrive in Edinburgh at The Queen’s Gallery at the Palace of Holyroodhouse marking the 500th anniversary of the artist’s death.

A book Leonardo da Vinci : A Closer Look  will be published on 1 February pointing out hidden details in the artist’s drawings. It presents findings from 20 years of scientific research by Alan Donnithorne former Head of Paper Conservation at Royal Collection Trust.

The author leads you through 80 or so of Leonardo’s finest drawings from the Collection showing you things you might otherwise miss, He has used a range of investigative methods such as X-ray fluorescence and ultraviolet imaging to bring them to light.

The book’s remarkable photography shows both tangible evidence of Leonardo’s way of working, much of it invisible to the naked eye, and physical traces of the artist’s hand. One of the most evocative of these is Leonardo’s thumbprint on the drawing The cardiovascular system and principal organs of a woman, c.1509–10 (at the National Museum Cardiff, then at The Queen’s Gallery, Buckingham Palace). At the centre of the sheet’s left edge, the print is in the same reddish-brown ink as the ink lines of the drawing. It can only be concluded that, after creating the work, the left-handed Leonardo picked up the sheet with inky fingers.

Leonardo used iron gall ink for his drawings, a pigment made from oak galls and iron salts that becomes transparent under infrared reflectography (IRR).  In Studies for the head of Leda,
c.1505–8 (Derby Museum and Art Gallery, then at The Queen’s Gallery, Buckingham Palace), Alan Donnithorne demonstrates how Leonardo changed Leda’s original pose in the underlying black-chalk composition, seen under IRR, when he drew the final version in pen and ink. IRR imaging also shows that Leonardo sometimes drew without any underdrawing at all, his pen moving across the sheet of paper with complete fluidity, as in A man tricked by gypsies, c.1493 (at Kelvingrove Art Gallery and Museum, Glasgow, then at The Queen’s Gallery, Buckingham Palace).

Using a binocular microscope at high magnification, Alan Donnithorne analysed pigment particles on several of Leonardo’s drawings, including Three emblems, c.1508–10 (at the Walker Art Gallery, Liverpool and then at The Queen’s Gallery, Buckingham Palace). He shows how Leonardo represented the sky with blue watercolour and how further examination suggests that the pigment is ultramarine blue. Made by grinding lapis lazuli into a powder, ultramarine was the finest and most expensive blue used by Renaissance painters. This surprising choice of a luxury material for a drawing is typical of Leonardo’s eclectic approach to available media.

Alan Donnithorne explains that Leonardo’s use of a wide range of paper types was unusual for the time and further indication of the artist’s experimental way of working. Examination of The head of an old bearded man in profile, c.1519 (at Southampton City Art Gallery, then at The Queen’s Gallery, Buckingham Palace) reveals that the paper is full of miscellaneous fibres, including straw and fragments of rope, and that the original papermaker had repaired the sheet. The paper of A sketch of the viscera, c.1515–16, contains fragments of wood chips, hair, wool and insect parts, possibly sweepings from the mill floor.

Martin Clayton, Head of Prints and Drawings, Royal Collection Trust, said: ‘The groundbreaking research presented in Leonardo da Vinci: A Closer Look represents a significant contribution to our existing body of knowledge about the Renaissance master.  In this “year of Leonardo”, we are delighted to be partnering with organisations around the UK on an ambitious programme of exhibitions and to be presenting at The Queen’s Gallery, Buckingham Palace the largest exhibition of Leonardo’s work in over 65 years.’

There are twelve simultaneous exhibitions around the UK opening on 1 February 2019 around the country, but we have to wait until November until they will be displayed here.